Is There Still Time for Diplomacy With North Korea? 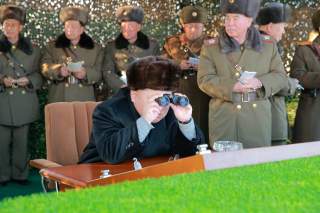 North Korea’s first test of a missile able to reach the United States has predictably set off a firestorm of speculation about the Trump administration’s next steps. The test should not be a surprise since Kim Jong-un forecast it in a speech in January this year. It is surprising however, to watch the U.S. foreign policy community propose unrealistic solutions that offer no chance of success.

Some talk about accepting North Korea as a nuclear weapons state and providing Pyongyang with assistance to help it stave off what they believe is a humanitarian disaster—a fairly severe drought—facing the North Korean people. Still others argue that China should accept sole responsibility for denuclearizing Pyongyang, going beyond stepping up sanctions to reaching a deal with the North providing a security assurance and assistance in return for it tamping down its nuclear program. How to convince China to take that drastic step and why North Korea would want a security assurance from China, not the United States, its main enemy, is left for others to figure out. And then of course there is the ever-present group advocating tougher sanctions on China, North Korea and anyone and anything else that can be sanctioned to punish Pyongyang. But pressing this policy default button isn’t going to stop Pyongyang from moving forward.

The Trump administration has reached this entirely predictable moment of truth, the result of two serious miscalculations. First, the administration put too much faith in China and its willingness to apply effective pressure on the North. Second, Washington underestimated North Korean determination to resist any sort of pressure, whether economic from the Chinese or American military threats. U.S.-Chinese cooperation has now deteriorated as a result of Washington’s frustration, North Korea has conducted its first test of a ballistic missile able to reach Alaska, and the administration may be on a slippery slope to either war or having to accept North Korea as a nuclear weapons state.

These developments have drowned out a muffled but consistent drumbeat out of Pyongyang since November, a willingness to reengage with the Trump administration, to start a dialogue with neither side having the right to demand preconditions for talking. That drumbeat has become apparent in a series of private bilateral meetings between North Korean government officials with ties to their leadership—and American experts. The Trump administration, to its credit, has picked up on this drumbeat, most recently sending a State Department diplomat to meet the North Koreans in Oslo.

This window for diplomacy may still be open but isn’t likely to stay open for much longer. Lost in the media scrum over the North Korean ICBM launch is a significant statement by Kim Jong-un following the test that he would not put the nuclear and missile programs on the negotiating table until after the United States stops its hostile policy and its threats against the North. For experts with a lifetime of reading North Korean tea leaves, that statement is much more explicit than any he has made in the past. It means that the North Korean nuclear and missile programs are up for discussion under the right conditions. That is significant. It also echoes what North Korean government officials have been hinting at for months now in private sessions.

Before the Trump administration moves to harsher, potentially more dangerous steps, it owes our allies in the region as well as the American people to explore whether diplomacy is still possible. First, the administration should step up informal U.S.-North Korean diplomatic contacts that have already taken place. Second, Washington should explore whether it is possible to reach an initial temporary arrangement on what the North Koreans call “confidence building measures” that could cool tensions and provide some breathing space for the resumption of formal negotiations intended to explore whether a peaceful path forward in dealing with the North Korean nuclear and missile challenge is possible.

The surest way to achieve this objective is to seek a moratorium on North Korean missile and nuclear testing in return for the United States and South Korea agreeing to suspend joint military exercises. This would be an initial temporary step short of a more far-reaching freeze on North Korea’s programs, including the production of bomb-making material, that would have to be the subject of detailed talks. Of course, a total cessation would be unacceptable and the North Koreans know that. But exploring the suspension of exercises that the North finds most objectionable—the largest ones held twice a year in late winter and summer that involve tens of thousands of troops—might provide a path forward. This scaling back of exercises has also been publicly supported by China and Russia.

While many American pundits think this proposal is unacceptable, arguing that it would undermine the conventional defense of the peninsula, in fact, the United States and South Korea have suspended joint exercises in the past in return for steps by North Korea on the nuclear front. From 1991–96 the large Team Spirit exercise became both a carrot and a stick during U.S. negotiations with North Korea over its burgeoning nuclear program. This exercise was canceled in 1992, carried out again in 1993, and planned—but not executed—from 1994–96 as a result of negotiations that led to the 1994 U.S.-DPRK Agreed Framework. Changing the program did not undermine our ability to mount an effective conventional defense.

Since war is not a game, the practice, that is the exercises, become all that more important and necessary. But not all exercises are the same in importance and contribute the same in war-making capability. Further, time spent conducting military exercises does not have to be lengthy or complicated to achieve the necessary training objectives.

Certain parameters exist for all Korean exercises, which if met, will provide excellent war-fighting training. The most important alliance exercise training objectives revolve around command and control, at varying levels of operation, involving actions such as decision-making, information flow, and supervision of subordinate units, particularly within multi-national and combined commands. It is imperative that these exercises stress the alliance commands at all levels and its ability to react to changing operational circumstances.

These type of exercises do not have to be conducted on a large-scale or perhaps even in South Korea. Today, the number of personnel participating in exercises can be much smaller, principally because they are normally command post exercises rather than field training exercises—and they consist primarily of headquarters leadership and staffs at the joint and combined level and the immediate subordinate headquarters.

Such exercises would achieve their primary purposes: strengthening command and staff capabilities to exercise and improve multinational command and control; attaining more seamless coordination among staffs and between commands; and validating and improving the execution of operational plans.

Given these alliance objectives, it is entirely possible for the United States and South Korea to discontinue its two largest exercises—Key Resolve and Ulchi-Freedom Guardian—and work to achieve these important objectives through an alternative program along the following lines.

First, conduct a low profile, computer-assisted combined command post exercise at the operational level that would be similar to the Key Resolve exercise but without the high profile publicity and without substantial U.S. or South Korean forces involved. The exercise would focus on operational command and control over South Korean and U.S. subordinate headquarters and staff procedures.

Second, conduct series of unilateral and combined strategic table-top exercises at the South Korea and U.S. national levels with focus on high level decisionmaking. There need be no publicity and certainly no large-scale forces.

Fifth, conduct ground exercises by South Korean and U.S. forces at division level and below. Exercises could include combined-training exercises or separate South Korea and U.S. ground-force exercises.

Maintaining North Korea’s healthy respect for the combined force posture of the United States and South Korea on the peninsula is an essential objective that all can agree to. Even better, if that objective can be achieved while also securing a moratorium on North Korean missile and nuclear tests, possibly opening a path to negotiations on solving the security challenge facing all of us, then it’s a risk worth taking.

Joel Wit is concurrently a senior fellow at the U.S.-Korea Institute at SAIS and a Senior Research Fellow at Columbia University Weatherhead Institute for East Asian Studies. He worked for fifteen years in the U.S. Department of State on arms control and non-proliferation issues. From 1995–2001 he was the Coordinator for Implementation of the U.S.-North Korea Agreed Framework. After leaving the State Department, he was a senior fellow at the Center for Strategic and International Studies. Wit is the coauthor of "Going Critical: The First North Korean Nuclear Crisis," published by the Brookings Institute Press in 2004. He has also written numerous journal and newspaper articles on North Korea as well as appearing on television and radio.