There's Less to Mueller's Charges Than Meets the Eye 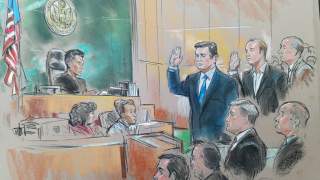 The most convincing indication of the flimsy results of Special Counsel Robert Mueller’s investigation into alleged connivance between Donald Trump’s presidential campaign and the Russian government can be found in the morning-after, front-page headline of the Washington Post:

Sounds rather dramatic at first glimpse. But who is being charged with what? A close reading of the story that follows reveals that the only big name of the three “officials” is Paul Manafort, the veteran Washington lobbyist and wheeler-dealer who briefly served as the head of Donald Trump’s campaign for the Republican nomination before he was fired. Manafort has been charged with acts and alleged offenses that have nothing to do with his role in the campaign. Manafort and his longtime business associate, Rick Gates, have both pleaded not guilty—and have yet to be proven guilty—of money laundering, conspiracy and making false statements to investigators. But, even if they are eventually convicted, the charges are in no way connected to the Trump campaign, much less to Donald Trump himself. While a frenetic front-page story in the New York Times reported as fact that the charges laid out in the indictments “laid out the most explicit evidence to date that his campaign was eager to coordinate with the Russian government to damage his rival, Hillary Clinton,” the story that followed showed nothing of the sort.

Even in the version touted by the New York Times, what Manafort is charged with is laundering “millions of dollars through overseas shell companies—using the money to buy luxury cars, real estate, antique rugs and expensive clothes.” Such behavior, if true, would indicate that Manafort has, indeed, maintained questionable habits. But none of it—no matter how many bucks he laundered to dodge taxes or how many designer suits and oriental rugs he splurged on with his ill-gotten gains—can even remotely be argued at be an attempt to influence the outcome of the 2016 presidential election on behalf of Russia. Ditto with his sidekick, Gates.

Which brings us to the third “official” (according to the Washington Post) or “advisor” (according to the New York Times), an obscure young political bottom-feeder by the name of George Papadopoulos. I think it is fair to say that, even inside the Beltway, Papadopoulos is not a household name. A few aging CIA conspiracy theorists may recall that a Col. George Papadopoulos headed the military junta that seized power and toppled the monarchy in Greece in 1967. But, aside from the fact that no one to my knowledge has claimed that the elder and younger Papadopouloses are related, the colonel was removed from power in 1977, ten years before Papadopoulos minor was born, and spent most of his later years as a Greek political prisoner. He died in 1999, when our Papadopoulos would have been all of twelve years old.

All we do know about the Papadopoulos minor is that he seems to have struggled to hitch his wagon to the Trump candidacy and was a one-line signatory on hastily cobbled together list of foreign-policy “experts” endorsing the Donald’s run for the nomination. His feverish efforts to broker meetings between dubious Russian sources and campaign leadership were repeatedly dismissed. What Papadopoulos was charged with—and subsequently pleaded guilty to—was lying to investigators about his repeated, self-promoting attempts to become a serious player in the campaign, mainly by claiming to have access to Russian “sources” eager to spill the beans on Hillary Clinton. The sources themselves have since been unmasked as bogus and there is no evidence that they ever had any input—much less acted in collusion with—anyone in authority in the official Trump campaign.

So, at this point, what do we have? Two Washington wheeler-dealers who did, indeed, play official—though relatively brief—roles in the Trump campaign who now face charges that have nothing to do with their campaign roles or any campaign-related activities. Add to that one fringe wannabee who desperately tried to become a major player in the campaign, dangled spurious claims of access to high-level Russian sources as an entry ploy, and was repeatedly fobbed off by the campaign. Caught up in his own lies, Papadopoulos ultimately pleaded guilty—and not because his efforts had any impact on the campaign, but because he was caught lying to the FBI about his activity.

The best response to these developments would have been a calm, cool and measured rejoinder from the White House Press office, which was, indeed, forthcoming. Hours later, however, while much of the world slept, tiny fingers were all a-twitter in the White House family quarters. In characteristically bombastic terms (“The Fake News is working overtime”), the Tweeter-in-Chief weighed in personally, as is his wont.

While I don’t particularly admire his atrabilious style, it often seems to work. Perhaps the best thing Donald Trump has going for him is the fact that the sometimes shrill, sloppy mini-comments he lobs into the debate tend to render his political and media attackers at least as shrill and sloppy. In fact, they often appear a lot more untargeted and hysterical than Trump himself.

Aram Bakshian Jr. served as an aide to presidents Nixon, Ford and Reagan. His writing on politics, history, gastronomy and the arts has been widely published in the United States and overseas.