There's No Such Thing as 'the' Liberal World Order 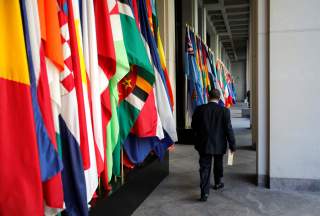 Is the liberal world order collapsing? In response to the wave of nationalism and populism that has produced Brexit and the election of Donald J. Trump as president of the United States, it has become fashionable to claim that “the liberal world order” is being replaced by a catastrophic spiral of protectionism, rising authoritarianism and great-power conflict that bring to mind the 1930s. Often this argument is accompanied by the claim that there existed a bipartisan consensus in favor of “the liberal world order” from 1945 until the populist wave of the last few years. For example, the Brookings scholar Robert Kagan warns, “The liberal world order established in the aftermath of World War II may be coming to an end, challenged by forces both without and within. . . . With the election of Donald Trump, a majority of Americans have signaled their unwillingness to continue upholding the world order.”

Liberal World Order 1.0 was established by the victors of World War II. Its constitution was the 1945 United Nations Charter. The new global order was liberal in the nineteenth-century sense—founding international relations on the principles of outlawing “the scourge of [aggressive] war,” “fundamental human rights” and the self-determination “of nations large and small.” While national self-determination was a basic principle of the UN system, multiparty democracy was not. Two of the five members of the UN Security Council in 1945, the Soviet Union and Nationalist China, were nondemocratic regimes, as were many of the Latin American republics that initially dominated the UN General Assembly.

In much of the world, the realization of human-rights ideals, symbolized by the Universal Declaration of Human Rights, adopted by the UN in 1948, continues to be only an aspiration. But the powerful post-1945 norm against wars of imperial aggression has endured to this day. India’s annexation of Portuguese-controlled Goa in 1961 was tolerated by the international community, and Russia’s annexation of Crimea in 2014 is unlikely to be reversed. However, most countries viewed Iraq’s annexation of Kuwait in 1990 as a violation of a basic global norm, and most of the world does not recognize Israel’s occupation of disputed portions of the former Palestine Mandate.

The presumption in favor of national self-determination has proven strong as well for more than seven decades. Thanks to the decolonization of European empires and the more recent partition of the Soviet Union, Yugoslavia, Sudan and other multinational states, the number of countries belonging to the United Nations has grown from fifty-one in 1945 to 193 today. The proxy wars of the Cold War in Korea, Indochina and Afghanistan were intended to protect or install regimes friendly to one of the rival superpowers, not to annex their territories and populations.

As the Cold War escalated in the late 1940s, Liberal World Order 1.0 gave way to Liberal World Order 2.0. The Truman administration adopted the policy of containment of the Soviet bloc, which would last in various forms until the end of the Cold War. Soviet-American rivalry paralyzed the United Nations Security Council. Global institutions like the IMF and World Bank were eclipsed in importance by hastily improvised regional bodies like the North Atlantic Treaty Organization, founded in 1949, and the European Economic Community, established by the Treaty of Rome in 1957. These had a counterpart in the Communist bloc in the Warsaw Pact military alliance (1955–91) and the Council for Mutual Economic Assistance (1949–91). Within the Western bloc mutual tariff reductions took place under the auspices of the General Agreement on Trade and Tariffs (GATT), but many countries maintained capital controls until the late 1950s.

The third iteration of the post-1945 liberal world order came in the 1970s. The initiative for change came from the dominant power in the system, the United States. Following the costly proxy wars in Korea and Indochina, Americans were weary of the costs of the strategy of containment of the Communist bloc, even as formerly dominant American industries were battered by competition from Japan and West Germany, which had recovered from wartime devastation. In geopolitics, President Richard Nixon carried out a more nationalist strategy of retrenchment, based on détente with the Soviet Union, the “opening” to Mao’s China, the delegation of military responsibilities to client-states and allies (the Nixon Doctrine) and the abolition of military conscription in the United States. In geoeconomics, the Nixon administration sought to protect American industry by unilaterally destroying the post-1945 Bretton Woods system of fixed exchange rates and imposing a temporary tariff on imports.

Nixon’s successors, Jimmy Carter and Ronald Reagan, decried amoral Nixonian realpolitik and sought to base U.S. foreign policy on human-rights promotion and crusading anti-Communism, respectively. Nevertheless they worked within the post-Nixon framework of Liberal World Order 3.0. Abandoning détente with Moscow in response to the Soviet Union’s military buildup and invasion of Afghanistan in 1979, Carter and Reagan consolidated a classically realist Sino-American alliance against Moscow. Reagan followed a version of the Nixon Doctrine, relying on proxies—“freedom fighters”—to battle Soviet clients in Central America and Africa.

Like Nixon, Reagan took a tough line in trade diplomacy with American allies, imposing tariffs on consumer electronics and heavy motorcycles from Japan as well as quotas (“voluntary export restraints”) on other Japanese imports including automobiles and machine tools. By means of the Plaza Accord of 1985, the United States sought to protect American industry further by lowering the value of the dollar relative to the German Deutschemark and the Japanese yen. Liberal internationalism 3.0, then, was characterized by American avoidance of Vietnam-style quagmires combined with American economic nationalism within the framework of the existing multilateral trade system.

What many today defend as the liberal world order is nothing more than the fourth liberal world order—this one, dating to the early post–Cold War era. Contrary to claims that post-1945 liberal internationalism is under attack, only certain features of post–Cold War Liberal World Order 4.0 are being rejected by populists in the United States and Europe. Globalization on a large scale, characterized by the emergence of transnational corporations and supply chains, got underway only in the 1990s and 2000s. Mass immigration to the United States and Europe is also largely a post–Cold War phenomenon. The euro and the Eurozone date back only to 1999. Labor mobility within Europe is also a relatively recent policy. Controversial “megaregional” trade pacts like NAFTA, the TPP and TTIP, which go beyond old-fashioned tariff reductions to rewrite much domestic legislation, go back only to the 1990s. The “responsibility to protect,” invoked to justify “humanitarian wars” like the war by the United States and NATO allies against the Qaddafi regime in Libya, is of even more recent provenance, having been devised only in 2000 and endorsed only in 2005 by the United Nations.

But Liberal World Order 5.0 is less likely to resemble the world disorder of the 1930s than to resemble Liberal World Order 3.0. Like Nixon, President Trump opposes what he views as the strategic overcommitments of his predecessors and demands more of allies and client-states. And like Nixon, he seeks to rebuild U.S. manufacturing and revise trade arrangements to America’s advantage.

President Trump and other nationalists and populists may fail. But if they succeed, either through their own efforts or by winning strategic concessions from establishment politicians like Britain’s Theresa May, the next world order is likely to be a liberal world order too, even if immigration is somewhat restricted and industrial policy partly rehabilitated. The result will almost certainly be something like the system of the Nixon-to-Reagan era, which was compatible not only with the broad norms of the post-1945 world order but also with the maintenance of America’s alliances with European partners and Japan.

Michael Lind is a contributing editor at the National Interest and a contributor to the American Project at Pepperdine’s School of Public Policy.