There's Only One Way Out of the Garland/Kavanaugh Quagmire: Supreme Court Elections 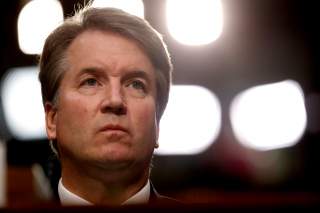 It may seem ages ago now, but for 293 days in 2016 and early 2017 the American people endured the spectacle of the U.S. Senate refusing to consider the nomination of Judge Merrick Garland to a seat on the United States Supreme Court. Garland was widely respected, politically centrist, and at age sixty-three, relatively old, meaning that a future president would probably get to replace him before too long. The Republican Senate refused to even consider the idea of a third Obama-era nomination.

When President Trump nominated Neil Gorsuch to fill the vacant seat, Senate Democrats filibustered—as a matter of course. To no avail. Lacking any real dirt on Gorsuch, the Democrats then grasped at an overhyped plagiarism charge. It didn't stick. Gorsuch coasted onto the Court.

Now it’s Brett Kavanaugh’s turn. Whatever Kavanaugh did or did not do in high school and college, the charges themselves are political gold. And they have been played for gold, drip-dripped out by the Senate Democratic leadership in the hope of making the Republican Party pay as dearly as possible for its next Supreme Court seat.

That the Republicans will get the seat is not in doubt. Even if the Kavanaugh nomination is ultimately abandoned and the Democrats miraculously wrest back control of the Senate in November's elections, the ruthless Senate Republican leadership will certainly push through a second Trump nomination before the year is out.

For Brett Kavanaugh and his accusers, today’s Senate hearings mean everything. For the political makeup of the Supreme Court, they are mere spectacle. Trump and the Senate Republicans will get their Justice, whether or not it’s Kavanaugh. The rest of us will get unusually good political TV, and little else.

But what will happen if Donald Trump wins reelection in 2020, and the Democrats do eventually regain control of the Senate? Will the Senate never again confirm a Supreme Court nominee of the opposing party? Since 1955 the presidency and the Senate have been controlled by different parties exactly half of the time. The way things are going, that’s a judicial disaster waiting to happen.

There’s an easy and obvious way to cut through the political gridlock in Washington. It's called “democracy.” In a democracy, political debates are decided by a popular vote. We may not have a national popular vote for the Presidency, but we do have fifty-one state and district votes. And if we can elect our political representatives from the President on down, there’s no reason why we can’t elect our Supreme Court.

What’s more, the life tenure of Supreme Court justices is both undemocratic in character and arbitrary in effect. The political makeup of the Supreme Court can be determined for decades by the accident of who happens to be in office when elderly judges die or retire. It seems reasonable for Supreme Court Justices to have a long tenure, but a life tenure? Ten or twelve years seems long enough for anyone to wield such extraordinary influence over American life.

A sane and democratic Supreme Court would be elected at regular intervals for long terms with no prospect of reelection—and thus no incentive for Justices to politic once in office. Justices should keep their salaries upon retirement and perhaps given some honorary advisory role for the rest of their lives. They will have no problems finding jobs at America’s top law schools. But they should be chosen by the people, for the people.

The Federalists vs. Democracy

In their infinite wisdom, the Founding Fathers decided that the selection of the president of the United States was too important to be left to the people. Alexander Hamilton made the case for the Electoral College in Federalist 68, which is where he argued that the president should be chosen “by men most capable of analyzing the qualities adapted to the station.”

They also decided against the direct election of Senators. Article I, Section 3 of the United States Constitution directs that Senators should be chosen by the various state legislatures. It stayed that way until the Seventeenth Amendment was ratified in 1913. The Republicans, who currently dominate state-level politics, must be kicking themselves over that one.

In Article II, Section 2, the Founders gave the president the power to appoint Supreme Court Justices with the “Advice and Consent of the Senate,” and that created the mess we still find ourselves in today.

In the Constitution as it existed in 1789, Supreme Court Justices were twice removed from the People. The arch-liberal, anti-slavery John Marshall held the post of Chief Justice for thirty-four years. Of course, he owned slaves. His successor, the arch-conservative, pro-slavery Roger Taney was Chief Justice for twenty-eight years. Ironically, he freed the slaves he inherited from his family. Go figure.

No Chief Justice since has matched these early records, but they do sound more like the terms of Third World dictators than those of the leading consciences of a great democratic country. William Rehnquist, who led the Supreme Court into the twenty-first century, served on the Court for thirty-three years, nearly nineteen of them as Chief Justice.

It is clear that the Founding Fathers intended to shield the Supreme Court from the pressures of democratic politics. But the Founding Fathers, dare it be said, are all Dead White Men. Democracy is a living tradition. The Constitution was amended ten times before it even got started. Hamilton argued against the Bill of Rights, too, in Federalist 84. Luckily democracy got the better of him.

The Court Is Political

The Supreme Court is and always has been highly political. Lower courts may be run by non-political civil servants who merely interpret as best they can the often difficult cryptic pronouncements of the one Supreme Court. But the Supreme Court itself must inevitably weigh issues of morality, and morality means politics.

The charade by which America’s political elite politely pretends that Supreme Court nominees are evaluated solely on their legal credentials, not their personal politics, infantilizes the American people. If the people aren’t mature enough to elect Supreme Court Justices, then how can they possibly be mature enough to choose the person who holds the nuclear button?

Many among America’s political elite would maintain that the people are not mature enough for that, and snarkily point to the election of Donald Trump as proof. Shame on them. Democracy demands that everyone—the political elite most of all—respect the dignity of the people. The people certainly couldn’t do a worse job of selecting Supreme Court Justices than the Senate now does in confirming them. Given the chance, the people might do much better.