Theresa May and the Snap Elections: Keep Calm and Brexit On 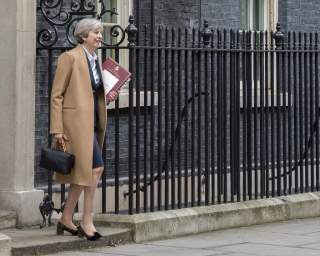 Theresa May, the British Conservative prime minister, is a difficult read. Last year, a month before Britain’s EU referendum, she told a Goldman Sachs audience in London that she supported membership of the European Union. She cited security and economic reasons. “People will invest here in the UK because it is the UK in Europe,” she said. A majority of British voters felt differently and elected to leave the EU—and yet, in the bizarre game of Westminster musical chairs that followed, May ended up taking charge of the British government. Since then, she has, in the teeth of huge opposition, pushed ahead with a firm break from the EU. Any hopes among those who didn’t want to leave the European Union that May, having been on their side (albeit not all that vocally) in the campaign, might steer away from a cataclysmic break with the EU have been dashed over and again. “Brexit means Brexit,” she has said, and on March 29, she triggered Article 50 of the Treaty on European Union, the formal two-year process for leaving the EU.

She also said, as recently as March, that she did not want to call a general election—Britain needed “a period of stability” following the referendum, she said, adding that she expected the next election would be in 2020. Then yesterday, after the Easter bank holiday, she called a snap general election for June 8 of this year. “The country is coming together” behind her Brexit agenda, she said, by way of explanation for her volte-face. “But Westminster is not.” She presented the election as a with-me-or-against-me poll for her vision for Britain’s future as an independent sovereign nation, a way of shoring up her democratic mandate to leave Europe on her terms. “Every vote for the Conservatives will make me stronger,” she said—a clunky line that made her sound like a crazed comic-book villain. But her point was that this election would give her the power she needed to carry on Brexiting.

It’s true that, by winning a clear majority, May will be able to brush aside accusations from the Europhiles and Eurocrats that the British people never voted for the “hard Brexit” she is pursuing. The opinion polls suggest May’s snap election will do exactly that. The Labour Party opposition looks hopelessly weak and divided, led as it is by the hapless Jeremy Corbyn, and the other significant parties in the House of Commons are not in a position to weaken the Conservative Party, with the possible exception of the Liberal Democrats, who have become the most reliably anti-Brexit voice in the media. A “poll of polls” analysis published last night suggested that May could increase her majority from seventeen to one hundred seats. Britain may still be torn over Brexit, and uncertain about May’s course of departure from the EU, but the British are not about to elect a slow-witted, bearded socialist oddball like Corbyn ahead of a pragmatist like May.

But this general election will prove much more challenging for May than the polls make out. Her opaque Brexit agenda will come under ever increasing scrutiny, and she will have to face the ongoing problem of the Scottish National Party. Led by Nicola Sturgeon, the SNP wants to use the fact that a large majority of Scots voted to remain in the EU as justification for a second referendum on Scotland’s independence from the UK—just two years after losing the first. May has resisted those efforts so far, but if the SNP makes further gains north of the English border on June 8, it will become harder for her to keep saying “now is not the time” for Scottish nationalism.

Labour, moreover, is not as weak as analysts often assume. Corbyn may be daft, and as far to the left of the British mainstream as Bernie Sanders is to America’s, but voters are less and less predictable and Labour’s support is more resilient than many polling firms recognize. Corbyn, who is neither radically pro- or radically anti-Brexit, is probably more in keeping with the mood of the British people following the referendum. If Labour sticks to local issues, while May keeps “banging on about Europe”—as the much-reviled, Tory right-wingers are notorious for doing—the prime minister could find her support among the middle classes ebbing away.

It would be too wildly contrarian to speculate, at this stage, that Corbyn could actually win. British polls historically tend to underestimate the extent of Tory support across the country, so she could win an even bigger majority than one hundred. But if her victory is anything less than overwhelming, May’s snap election could end up dramatically weakening her authority, which would be bad news for her Brexit ambitions.