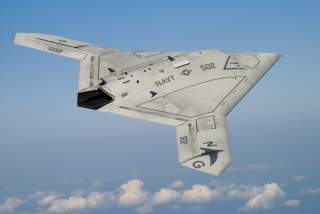 Last month, the U.S. State Department unveiled new export guidelines for commercial and military unmanned aircraft—colloquially known as drones. While ostensibly holding firm to the U.S. government’s adherence to the voluntary Missile Control Technology Regime, the new policy would allow the export of drones with ranges greater than 300 kilometers and a payload of more than 500 kilograms on “rare occasions.”

The new policy formalizes the de facto arrangement that already existed, which allows the U.S. government to currently export machines like the General Atomics MQ-9 Reaper and the Northrop Grumman RQ-4 Global Hawk. But perhaps more significantly, it sets up a standard for the export of commercial drones—imposing restrictions on the sale of those machines.

With the door more or less open to a wide range of sales to foreign operators—here are five countries that might benefit from U.S. drone technology.

In terms of territorial landmass, Canada is second only to Russia in terms of sheer size. Further, the country has the world’s largest coastline. But Canada lacks a large population base and the northern reaches of the country are virtually undeveloped.

Northern Canada is roughly three and a half times the size of Alaska, but has less than one third of the population of America’s largest state. The territory is vast and offers a treasure trove of mineral wealth—but is almost completely undeveloped. Further, Canada’s north is home to the fabled Northwest Passage—which until recently was more or less frozen over for most of the year. Thanks to warming global temperatures, the Northwest Passage is starting to open up.

But therein lies the problem for Canada. The opening of the Northwest Passage means that there will be tremendous economic opportunities, but at the same time, Canada must start to patrol the area properly to maintain sovereignty over it—a sovereignty that is routinely challenged by Russia and other Arctic powers. A large drone—such as a Northrop Grumman MQ-4C Triton—would help Canada patrol its north.

Singapore is a tiny but important U.S. ally. Strategically located at the southern tip of the Straits of Malacca—an extremely important maritime trade route—the city-state exerts disproportionate political, economic and military influence in the region. While not a democracy in the true sense of the word—one can only really describe the Singapore government as fascist—it is friendly to the United States and more or less aligned with American foreign policies.

Through Singapore, the United States can exert more influence in Southeast Asia and make sure the economically important straits remain secure. The United States already sells advanced warplanes to the island-nation—selling it drones like the Reaper to help patrol those sea-lanes is only a small additional step.

Like Canada, Brazil has vast, undeveloped, mineral-rich territories that it has no reliable means of patrolling. Drones like the MQ-9 could help Brazil patrol its expansive Amazon rainforests and porous borders—particularly toward the north of the country.

While U.S. relations with Brazil have been rocky over the past few years, selling Brazil unmanned aircraft technology might be a way to help repair wounds opened by the Snowden documents (where it was revealed that the NSA was extensively spying on the Brazilian government and commercial activities). Brazil needs the capability, and the country has a growing world-class aerospace sector.

A joint co-development effort to build a drone for Brazil might go a long way in helping that country with the development of its aerospace industry and protection of its borders. The United States meanwhile would secure an ally in South America’s largest and most powerful state.

The North African nation of Morocco has a government friendly to the United States and its interests. Further, the country is located in an area of the globe that is plagued with Islamic fundamentalist militants who must be combated. Mali, the Algerian desert and the chaos in Libya are all in Morocco’s neighborhood.

Morocco’s military is well funded, well equipped and well trained by the standards of the region. The country already operates a fleet of advanced Lockheed Martin F-16s and other U.S. equipment. This fact has not been lost on the U.S. government, which granted General Atomics an export license to sell the unarmed Predator XP to the country—but it is not clear if the deal went through. Nonetheless, the U.S. government should consider selling armed MQ-9 Reapers to this North African nation.

India is a nascent superpower in South Asia that could one day act as a counterbalance to China’s growing power. But India is still developing and is currently surrounded by hostile powers—some of which sponsor terrorists.

India and the United States have growing military ties. The sale of drones like the MQ-4C Triton to patrol India’s coastline or MQ-9 Reapers to strike at Pakistani-sponsored terrorists on its northwest flack could help cement those ties.

The United States could also help develop next-generation unmanned aircraft with India’s developing defense-aerospace industry. A stealthy, jet-powered unmanned strike aircraft could be just what India needs to ward off an aggressive China.