These 5 Things Could Challenge China's Rise 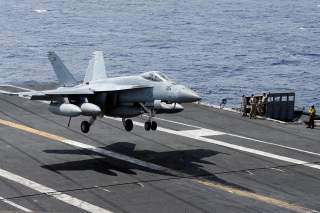 During his presidency, George W. Bush famously asked Hu Jintao, then president of China, what kept him up at night. Hu replied that it was job creation: how would he be sure that he could provide employment for the twenty-five million people entering the workforce every year?

Hu’s China was a different era. The “peaceful rise of China” has given way to the “great rejuvenation of the Chinese nation,” and, at the 19th Party Congress last month, Xi Jinping unequivocally stated that China will now be “moving closer to center stage.”

Today, displays of Chinese confidence abound, from the South China Sea to its first overseas military base, from the Asian Infrastructure Investment Bank, to the Belt and Road initiative, the architecture of China’s global footprint is increasingly revealed. How much has changed for China’s leadership? Despite a climate of outward confidence, there is still much that troubles the minds of China’s highest governing circles.

As the Chinese Communist Party (CCP) gets back to business following an illuminating Party Congress, we’ve picked five items that are keenly on their minds: geography, the United States, the rise and return of other powers, “separatism” and economic stability.

What motivates Chinese expansion and assertiveness? While much has been written on fishing rights, hydrocarbon resources, and historic territorial claims, less explored is a more comprehensive theme: unfavorable strategic geography.

China is now world’s largest trading nation; its continued prosperity relies on open sea lines of communication. Yet China’s open-ocean access is remarkably limited. From the east, ships must pass through straits bordered by potentially hostile entities—Japan and Taiwan. From the west, access to the South China Sea is essentially restricted to the Strait of Malacca, Sunda Strait and Lombok Strait.

In combating this strategic vulnerability, often characterized by the “Malacca Dilemma,” China’s massive naval construction, island building in the South China Sea, and Belt and Road initiative should be viewed as a singular policy. Take energy. China imported oil to meet approximately 64 percent of its need in 2016, a figure projected to grow to 80 percent by 2035, according to the International Energy Agency. It is no coincidence that the Belt and Road’s flagship project—the China Pakistan Economic Corridor—is centered on transportation-and-energy infrastructure from Gwadar to Xinjiang, diversifying China’s supply routes. Where China invests, its military follows. The People’s Liberation Army (PLA) recently opened its first overseas base in Djibouti, itself located off a strategic choke point, and a move that builds upon PLA Navy’s Indian Ocean deployments and contributions to anti-piracy operations. A succinct strategy emerges, illuminating China’s whole-of-government approach to “active defense.”

China’s global expansion is often viewed as a sign of developing strength. It should also be a recognition of growing insecurity reflected in its expanded global interests. That the success of Xi Jinping’s “China Dream” largely flows through a few maritime chokepoints, undoubtedly gives Chinese leaders pause.

“One day, sooner or later, America will certainly let go of the West Pacific places and withdraw back home, just like it has had to let go of other regions in the world.” — Mao Zedong, Founder of the People’s Republic of China

Whether U.S. policymakers like it or not, the CCP’s vision includes the displacement of the United States in Asia. What has changed is that China is now not only an Asian power, but a major global actor. As referred to in our first section, the resource needs of the People’s Republic of China (PRC) cannot be met from within China’s borders. The rise of the Chinese military will track the needs of Chinese trade and will eventually require substantial global capabilities. However, China must proceed to build up both its economy and its military in the shadow of the dominant superpower, the United States, without provoking a response that could imperil China’s rise.

The United States retains advantages over China in terms of real GDP, military capability, global alliances and partnerships, and sheer experience of power projection both in Asia and around the world. However, the United States is a distracted giant, with competing national priorities. China’s leadership must already navigate with caution when rising within the shadow of a Pax Americana. What China’s leadership fears is that the United States might make some unpleasant conclusions about the nature of China’s rise, and China’s challenge to U.S. leadership. Two possibilities include surrounding China’s periphery with missile defense, or economic retaliation.

China’s leadership has identified a “period of strategic opportunity” in which the rise of China is likely to be uncontested. While China appears bold or “assertive” in its initiatives from South China Sea island-building to the Belt and Road, these are calculated risks, designed to advance China’s ambitions without provoking the United States beyond what the PRC can handle.

The Rise and Return of Other Major Powers

The potential trajectory of U.S.-China relations has been compared by Henry Kissinger to the rise of Germany and its clash with Britain during World War I. However, as an American scholar explained at Oxford several years ago, there is a crucial difference between the rise of China and Germany. The German state was coming to power amidst collapsing empires on the European continent: both the Ottoman and Austro-Hungarian empire were in decline. China, however, comes to power surrounded by other strong and rising nations.

In short, China’s rise is not taking place within a vacuum. The PRC will have to contend not only with the United States, but with a constellation of other major states, many of which are beginning to band together to balance the PRC out of concern over China’s economic and military ambitions. Moreover, each of these states has a comparative geographical advantage over the PRC, which further complicates China’s geographical dilemmas.

The Indian Ocean Region, a region on which China depends for trade flows and energy resources, is home to a rising India, which will project military and economic power in conjunction with the United States, Australia, Japan and other democratic stakeholders. Japan may not be a rising nation, but it is a strong one, and its U.S. alliance notwithstanding, could arguably hold its own in a fight with the PRC. Indonesia is a rising power, approaching the one trillion dollar mark in GDP, building up its naval forces, and party to maritime disputes, which may push it towards a balancing camp vis-à-vis China. Russia, while demographically troubled and economically stagnant, remains a military power par excellence. While China-Russia military and economic cooperation is substantial at present, Russia’s long-term alignment to Chinese interests is uncertain, further reminding us that China’s rise takes place within a multitude of nations that are powerful and potentially dangerous to the PRC.

Fears of American-led “encirclement” or “containment” have been present in the Politburo since the founding decades of the PRC. Today, other substantial powers are acting on their own in ways that will strengthen their position regarding Chinese economic and military power. While China’s spokespeople and general public often attack American collaboration with other Asian countries as ‘Cold War thinking” and seem to genuinely miss that China’s own actions and territorial claims drive opinion and collective action against the PRC, there is no doubt that the gathering collaboration of other major actors is one of the core problem sets that troubles the CCP.

“Formosa, the Pescadores, the Four Northeastern Provinces, [Manchuria], Inner and Outer Mongolia, [Xinjiang], and Tibet are each a fortress essential for the nation’s defense and security. The separation of any one of these regions from the rest of the country means the disruption of our national defenses.” — Chiang Kai-Shek, China’s Destiny, 1947

Chinese budgets on internal security are similar to its military—an insight into the pressures of internal stability. From Xinjiang to Tibet, Hong Kong to Taiwan, China’s fear of domestic fracture persists even as Chinese focus on the outside world increases. China’s 2015 Military Strategy emphasizes the “formidable task” of maintaining “political security and social stability,” citing Tibetan and Uighur independence movements. Moreover, CCP thinking on “separatism” is continually suspicious of, in their own words, “anti-China forces [that] have never given up their attempt to instigate a ‘color revolution’ in this country.”

What the CCP does in one region is noticed in others. The failure to faithfully implement the “One China, Two Systems” policy in Hong Kong reverberates in Taiwan: speaking with numerous Taiwanese citizens in 2014, one author found that there was concern over “香港化,” or “Hong Kong-ization,” a realization that any eventual unification with the mainland implies the loss of any promised freedoms.

As Hong Kong’s “Umbrella Movement” reveals, a local identity is emerging in the city. Demographic transformation is even more visible in Taiwan. In 2016, 59 percent of Taiwan residents claimed exclusive Taiwanese identity, up from 18 percent in 1992, and only 3 percent identify as Chinese. CCP hopes of economic integration have not led to political assimilation.

Why go through the trouble? Politically, “national rejuvenation” cannot be achieved without complete unification. This also holds true strategically. Taiwan is key to the first island chain, and its control would make China masters of the near seas. According to a Chinese military manual, “As soon as Taiwan is reunified with Mainland China, Japan’s maritime lines of communication will fall completely within the striking ranges of China’s fighters and bombers.” Here, political and strategic incentives align. In Xinjiang, as well, internal and external security are linked. China Pakistan Economic Corridor, China’s main bid for land-based access to the Indian Ocean Region and its energy resources, hinges not only on troubled Pakistan but on China’s continued control of its northwest province. Despite massive Han immigration to Xinjiang and Tibet, only 6 percent of the population of the PRC is located in the Western half of the country, where non-Han ethnic identities remain strong, despite suppression campaigns.