These Russian Nukes Are Better Than America's 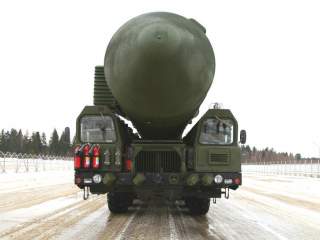 U.S.-Russia relations (as well as Russia’s relations with NATO) have reached a dangerously low point over the last two years—by far their lowest point since the Cold War. As a result, the issue of nuclear weapons has again come to the fore. It has repeatedly been stated, in extremely serious declarations, that both parties are rehearsing nuclear strikes against each other. For example, NATO Secretary General Jens Stoltenberg recently released his annual report, which claims Russia’s air force conducted a training mission in 2013 that was actually a “simulated nuclear attack” on Sweden. The report also revealed that this mission involved Tu-22М3 Backfire long-range supersonic bombers, under cover of Su-27 fighters. Meanwhile, NATO member Turkey is just a few steps from war with Russia, which does not make the situation any simpler.

In this context it is instructive to evaluate the state of nuclear forces in both the United States and Russia. How is this situation affecting the strategic balance, and dissuading the parties from starting a conflict? And what are the prospects for these two superpowers’ development of nuclear forces?

Both Parties Are Committed to the New Start Treaty

The New Start Treaty, signed on April 8, 2010, by Presidents Obama and Medvedev, reduces each country’s number of nuclear warheads to 1,550. The number of deployed intercontinental ballistic missiles (ICBMs) and heavy strategic bombers is limited to seven hundred. According to data published by the U.S. Department of State on April 1, both parties are at or near the stated figures. The United States possesses 741 deployed launchers equipped with 1,481 nuclear warheads, while Russia possesses 521 launchers equipped with 1,735 nuclear warheads. The difference is insignificant, and does not affect the strategic balance. Russia has fewer launchers at the moment, but this disparity is due to the fact that ICBMs that carry MIRVs (multiple independently targetable reentry vehicles) have a wider range of application—one ICBM can carry up to ten warheads.

The only land-based ICBM in service with the United Stated is the LGM-30G Minuteman III. Each missile carries one W87 warhead with a capacity of up to three hundred kilotons (though it can carry up to three warheads). The last missile was produced back in 1978, meaning that the “youngest” is thirty-eight years old. The missiles have been upgraded many times, and are intended to be used until 2030.

The United States’ new ICBM system, the GBSD (Ground-Based Strategic Deterrent), appears to be at a stalemate in the discussion phase. The U.S. Air Force is requesting $62.3 billion for the development and the production of new missiles, and hopes to receive $113.9 million in 2017. However, the White House does not support this request. In fact, many are opposed to this idea. The actual development was moved up a year, and the prospects may depend on the outcome of the 2016 presidential election.

It is worth noting that the U.S. government is going to spend an astonishing amount of money on nuclear weapons: around $348 billion by 2024, $26 billion of which is intended for ICBMs. And $26 billion is not enough for the GBSD. Actual costs may be higher, given that it has been a long time since the United States produced new land-based ICBMs. The latest missile, the LGM118A Peacekeeper, was deployed in 1986, but all fifty of them were removed from combat duty on a unilateral basis by 2005—and it is safe to say that the LGM118A Peacekeeper was an improvement in comparison with the Minuteman III, because the Peacekeeper could carry up to ten warheads. Despite the failure of the Start II Treaty, which banned the use of MIRVs, the United States gave up MIRVs on its own. Its credibility was lost because of the high price, and the scandal in which it was revealed that the missiles were lacking AIRS guidance systems for almost four years (1984–88). On top of that, the missile manufacturer tried to hide the delay in delivery—all while the Cold War was about to come to an end.

Russia possesses a wide range of land-based ICBMs at the moment, including mobile launcher vehicles. In 2015, the Strategic Missile Troops of the Russian Federation (RVSN RF) acquired twenty-four new RS-24 Yars units (NATO reporting name: SS-27 Mod 2), in both silo-based and mobile versions. This missile can carry up three or four independently targetable warheads capable of penetrating missile-defense systems. It is safe to assume that that the volume of delivery in 2016 will be at least equal to the 2015 level. Russia will be able to replace the Topol missile (essentially equivalent to the Minuteman III) by 2020, with the newest missiles, which are specifically designed to penetrate enemy missile-defense systems.

Russia also possesses heavy land-based, liquid-fuelled ICBMs. The R-36M2 Voevoda (NATO reporting name: SS-18 Mod 5, Satan), which has been in service since 1988, is very well known. It can carry up to ten warheads with a capacity of up to 750 kilotons each. This year the test will be conducted on the RS-28 (also referred to as “Sarmat”), the newest development intended to replace the Satan in 2020 and fully equipped to defeat missile defense systems. First of all, it is expected that the missile will have the ability to place the warhead in a suborbital trajectory (shorter than the circular orbit that is off-limits under the international agreement) and strike from literally anywhere, even from the South Pole. It forces the suspected enemy to build an integrated missile-defense system, which is extremely expensive, even for the United States. Moreover, the warheads will enter the atmosphere at hypersonic speed and move along a larger trajectory, maneuvering at a speed of 7 to 7.5 kilometers per second. Time of pre-launch preparation of the missile will be kept to a minimum: less than one minute after receiving the order.

Russia also has the mysterious RS-26 Rubezh. Not much information is available, but apparently it is a modification of the PS-24 Yars, with the ability to strike at intercontinental and medium range. Its minimum firing range is reportedly two thousand kilometers, which is enough to defeat the American missile-defense system in Europe. The United States opposes it, on the grounds that deploying the RS-26 is a violation of the Intermediate-Range Nuclear Forces Treaty. But this claim does not stand up to criticism: the RS-26’s maximum firing range exceeds six thousand kilometers, which means that it is in fact an ICBM, not an IRBM.

Given the evidence, the United States lags far behind Russia in the development of land-based ICBMs. The United States has one, to be fair very outmoded, ICBM: the Minuteman III, capable of carrying only one warhead, and the prospects of developing a replacement are very indistinct. In Russia, the situation could not be more different. Land-based ICBMs are being renewed on a regular basis—in fact, the process of developing new missiles never really ends. Each new ICBM is designed to penetrate missile-defense systems, which makes the EuroPRO project and Ground-Based Midcourse Defense (the U.S. antiballistic system for intercepting incoming warheads) ineffective against Russia in the foreseeable future.

The next article in this series will discuss the balance of the submarine and bomber fleets of the United States and Russia. The final piece will draw conclusions based on the information that we have gathered.