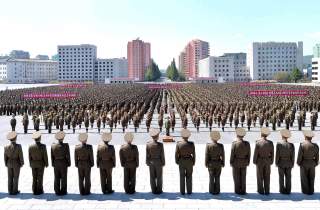 The United States and South Korea are increasingly in a mutual-hostage relationship with North Korea. It is important that President Donald Trump bear this fact in mind as he addresses the acute crisis on the peninsula; fundamentally, there are no great military options today, and a combination of economic sanctions with diplomacy offers the best hope of addressing the situation. However, over time new technologies could change that situation in the allies’ favor, and we need to get on with pursuing them as a way of gaining leverage against the North Korean strongman Kim Jong-un.

The current military situation is roughly as follows. America’s mid-course missile interceptors based in Alaska and California may be enough to provide us credible options to address possible North Korean missile attacks on the U.S. homeland. Other missile-defense systems, such as the land-based THAAD capability, and the U.S. Navy’s Standard Missiles guided by Aegis radars on surface ships, can plausibly protect Guam, Japan and southern areas of South Korea—such as the key logistics port of Pusan—reasonably well. But Seoul is inherently vulnerable. That city, including the broader metropolitan area that spans from Inchon in the west all the way to the capital's downtown and beyond, contains 25 million people—half of South Korea's population. It is vulnerable to short-range missile strikes from systems that could carry conventional or perhaps nuclear weapons. It is also vulnerable to barrage from several thousand North Korean artillery tubes, many of which can be rolled out of mountain redoubts and then wheeled back to cover after firing their initial shots. It is largely for these reasons that Pentagon models estimate that any war on the Korean Peninsula would likely cause hundreds of thousands of civilian casualties, even as it inevitably resulted in the complete demise of the North Korean regime.

However, two types of technologies that are now showing considerable promise—directed energy, and automated miniaturized systems—hold the potential to change the offense-defense balance. Seoul would not necessarily become impregnable to attack, but Combined Forces Command would have a very good chance of defeating the preponderance of incoming threats in ways that could meaningfully change the calculus of key actors in a crisis. That in turn could affect their behavior before a crisis, perhaps improving the odds of a diplomatic solution to the dilemma we face today.

Consider the second of these in particular (directed-energy lasers hold promise, but probably need another tenfold improvement in power, and even then may not work well in bad weather). Airborne robotic vehicles with the ability to talk to each other and, through artificial intelligence, coordinate with each other and concentrate their efforts against dense threats, can provide coverage of a zone of up to dozens of miles in dimensions over a period of days or weeks. Current technology could allow us to deploy swarms of interceptors with the capacity to patrol the airspace just north of Seoul looking for incoming rockets, then placing themselves along the anticipated trajectories of those rockets or even firing miniaturized interceptors against them. And in addition to intercepting inbound projectiles, waves of autonomous artillery suppression drones could loiter along the border, detecting the origin of incoming fire and propelling themselves toward enemy artillery pieces. Given the speed at which this could all happen with artificial intelligence, one of us and Amir Husain coined a new phrase to describe it—“hyperwar.”

In the event of war, or acute crisis, the job of this automated defense network would be most important in the early days of a potential engagement, before North Korea’s long-range artillery tubes and missile launchers could be silenced by larger ordnance from American and South Korean attack aircraft and counterartillery fire, as well as unmanned systems like those we discuss here.

In the short term, the lessons are threefold. First, we need to get on with innovation in these kinds of weapons. Second, President Trump should recognize that for all our military strengths, we do not have appealing comprehensive military options against North Korea now. He has been right to focus on intensifying economic pressure on Pyongyang and should continue down that path. But third, President Kim should understand that time is not necessarily entirely on his side as North Korea builds up missile and nuclear capabilities. In the end, a negotiated end to this crisis is what serves the interests of everyone.

John Allen is a senior fellow at the Brookings Institution and on the board of Spark Cognition.