Think the U.S. and Europe Have a Lock on the 21st-Century Defense Market? Think Again. 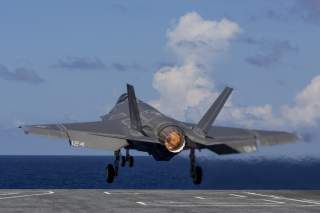 There is a paradigm shift underway in the international defense marketplace, and it’s led by nations evolving from longtime Western customers and production partners into worldwide sellers. Nations such as Israel, South Korea, Brazil, as well as Russia and China, have enormous potential to rewrite the rules of the twenty-first-century defense business—and America’s military relationships.

It’s true that the biggest defense exporter remains the United States, accounting for 45 percent of $175.5 billion in global arms purchases in 2015, according to Avascent Analytics. As well, Western European firms from allies such as the United Kingdom and France contributed 14 percent globally, according to Avascent data, giving America and its closest European partners a majority position at 59 percent of the market.

Yet for how much longer, though, can the United States count on holding sway over allies—and influence the balance of power in entire regions—through arms sales as it did during the twentieth century? Signs of a permanent change are clearer each year. Since 2010, Western defense sales are actually slipping—down from 62 percent.

This shift is driven by many forces, including the commitment by Western countries to an abundance of caution selling certain kinds of technology even at the expense of ceding the competitive field to new players. Also at work: an awakening in capitals like Seoul and Beijing that globalization affecting just about every other industry with worldwide supply chains and customer bases has somehow passed over the defense market—and that there is real political and economic value in leveraging those forces for a nation’s own military. Accordingly, non-Western firms now benefiting from greater domestic investment in defense technology, higher stakes technology transfer deals and growing internal and export demand for new sources of equipment and services. Plus, many allies aren’t so sure that being tied up to the United States or European nations is a prerequisite to have regional, if not global, influence.

As the data suggests, Western defense suppliers are in a strategic bind: budget pressure and red tape at home and new competitors abroad. With the steady march of technology for unmanned aircraft, submarines and airborne radars and sensors, the stakes get higher year by year for American and European firms.

Leading the Change: The Country-by-Country View

The list of nations on the cutting edge of this shift should be familiar to longtime defense officials as countries serious about their military development. Yet in the past many would have been viewed simply as importers of Western equipment to achieve that edge. Now they are exporters capable of driving wedges into strategic relationships that for decades were underpinned by trade with American and European firms. While many of these systems are smaller than big-ticket fighters or warships, the advanced technologies involved often can have an outsized impact on defense plans and future procurement.

Strategic self-sufficiency is a powerful motivation for Israel’s government and defense industry due to existential threats and lingering uncertainty about access to the global defense supply chain during a crisis. Years of Israel’s industrial policymakers channeling support to developing niche markets tied to improving and modifying imported (particularly American) defense platforms has given the country an edge. This is none more true at a time when many other nations also will look at a variety of sources to obtain the most effective combinations of equipment and technology for their militaries.

Israel’s areas of expertise include electronics systems, radar, precision munitions, and unmanned aerial systems. The popularity of such systems is clear: During the past five years, Israel exported at least a third and as much as half of all defense industrial production, including to India which is its largest current export market. Other deals include European, South American, and Southeast Asian governments.

Unmanned systems such as the Heron and Hermes UAVs have been sold on at least four continents, including buyers in South Korea, Germany, Canada and Australia.

South Korea boasts a juggernaut shipbuilding industry and recent success in the trainer/light attack aircraft market. It also faces lower obstacles to exports than other Asian competitors, such as China or Japan. Meanwhile demand for domestic systems is growing: locally sourced acquisitions rose from under 40 percent in 2010 to more than 50 percent in 2015.

Emerging from a legacy of selling mostly at home, South Korea’s defense firms and the nation’s political leaders have clear export ambitions. Korea Aerospace International (KAI) has sold its T-50 trainer aircraft and F/A-50 light attack variant to Indonesia, Iraq, Peru, and the Philippines. The Korean Fighter Experimental, or KF-X, program, a joint effort with Indonesia, has the potential to launch the country’s aerospace industry into the advanced multi-role fighter aircraft market. South Korea’s shipyards can produce advanced destroyers, frigates, amphibious assault vessels, and attack submarines with the same alacrity they’ve approached commercial vessels. Of note, South Korea exported its first submarine in March 2016 to Indonesia and two more are on order.

Aircraft maker Embraer is now well established in the commercial aviation market and is making inroads into niche regional and lower-tier markets with light attack aircraft, light transport aircraft, and low-end ISR and maritime patrol aircraft. This modest debut over the next 10 years has the potential to allow for a significant impact, nonetheless, as a regional source in South America for highly capable yet affordable systems.

Moreover, its partnership with Saab in the co-production of the Gripen fighter ensures an industrial connection to Western markets into the future that once established may prove to be highly valuable. This industrial alliance will work both ways, as the know-how the Swedish contractor brings for design and industrial processes has the potential to pay dividends in the coming years when it comes to competing economically in highly-competitive markets such as tactical aircraft.

Russian and Chinese defense deals may not offer up one-for-one replacements for European or US systems—yet—but what they can do is present buyers with cheaper solutions like the Su-30, and often with far fewer strings attached. Economic forces are also an influence. Russia needs hard currency to compensate for falling oil revenue, and arms fill that gap. Meanwhile, China’s GDP rise has led to more defense spending, including crucially on R&D. This addresses a key factor: the United States and European governments do not sell military hardware to China. Nonetheless, the payoff for this investment is clear: nascent programs in hypersonics, viable fifth-generation fighters like the J-20 and technologically advanced naval vessels such as the Type-55 destroyer.

For Russia’s part, its employment of cruise missiles in Syria and advanced equipment in asymmetric operations in Crimea and Ukraine effectively advertise unmanned ISR and electronic attack systems, long-range land-attack capabilities and precision-guided ground-attack munitions. among other systems. Notably, Russia last month deployed its advanced S-400 “Triumf” surface-to-air missile system to the Crimea, a system it has sold to China and is working to export to India as part of a reported $6 billion deal.

What Western Governments and A&D Companies Can Do:

This is just the beginning of a paradigm shift in the global defense marketplace.

For Western governments and their defense firms, this increasing “diffusion” of the global defense marketplace poses profound commercial and policy questions to resolve if they are to have any chance of enhancing or even simply preserving their global position.

For American and European defense firms, new commercial tactics are in order, as well as greater diversity at the supply chain level. One of the biggest changes: “simple exports” are a thing of the past. Meaningful technology transfer is the norm today, and the degree of technology sharing and industrial partnerships will only increase with a bias toward the customer nation’s domestic industry. Structuring bids and proposed transactions will require greater creativity and a deeper understanding of the local industrial context as part of broader regional and global market considerations.

The status quo is in flux, and this state of uncertainty may be the new normal as the percentage of U.S. and European defense sales slips year by year. While it is unlikely that any one nation will immediately challenge the United States directly with its export leadership, the effect of many countries crowding into once prized markets could still have a chilling effect on American alliances and defense partnerships globally.

August Cole is the writer-in-residence at Avascent. He is also an Atlantic Council nonresident senior fellow, focusing on using fiction to explore the future of war; and a member of the International Institute for Strategic Studies. He is the co-author of Ghost Fleet: A Novel of the Next World War and the editor of the Atlantic Council’s War Stories from the Future anthology.