Three Reasons Why Diplomacy with North Korea Will Remain Difficult 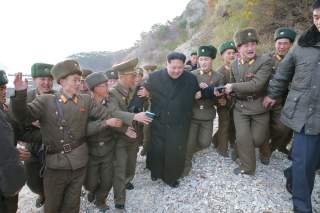 One of the few tangible victories the Trump administration could point to in its diplomacy with North Korea was a pledge from Pyongyang to help repatriate the remains of U.S. soldiers killed in the war. It was a kind of easy lay-up, serving as a confidence-building measure and a signal of good faith as the administration hammers out the details on the joint communique Trump and Kim Jong-un signed at their summit meeting in June.

On Thursday, however, North Korean officials stood America up, failing to even show up for a planned meeting to discuss the logistics of repatriating the war dead (the meeting eventually happened on Sunday, July 15). Furthermore, Secretary of State Mike Pompeo was caught in an embarrassing diplomatic gaffe on his latest confidence-building attempt to negotiate with the Hermit Kingdom, with North Koreans releasing a statement accusing the White House of pushing a “unilateral and gangster-like demand for denuclearization” that Pyongyang called “deeply regrettable.”

This was nothing if not predictable. In fact, experts had warned from the beginning that the vast, yawning gap in expectations between the United States and North Korea, and the failure to clarify terms—for instance, what does North Korea mean by "denuclearization of the Korean Peninsula?"—would result in problems down the line. Both parties failed to use the opportunity of the summit to resolve these issues, opting instead for vague, aspirational verbiage that clouded more than it clarified.

Pompeo must now awkwardly negotiate while maintaining some continuity with the president’s naïve and overzealous descriptions of the summit as a great success that effectively neutralized the North Korean nuclear threat. As negotiations stumble forward, we will likely continue to see embarrassing diplomatic foul-ups for three key reasons.

First, skillful, nuanced statecraft is imperative for such high stakes diplomacy, but it just isn’t in the Trump White House’s DNA. Despite its made-for-TV appearance of success, the Trump-Kim summit displayed competent stagecraft, but incompetent statecraft.

One key illustration of this is the utterly backward process undertaken when negotiating with North Korea so far. Typically, a face-to-face meeting between adversarial heads of state would come at the very end of the process, instead of the beginning. The idea is to conduct months and maybe even years of lower-level discussions, mostly in secret to avoid unhelpful showboating that can derail diplomacy. Once a basic framework is worked out that is acceptable to both sides, higher level officials meet to hammer out more of the details. Heads of state direct and inform the process, but don't typically meet until the deal has already been finalized.

Second, the Trump team betrays a fundamental ignorance of the central issues at stake. For example, Trump, Pompeo, and National Security Advisor John Bolton have said they expect North Korea to denuclearize within a year or two. Yet experts say it could take more than a decade to dismantle the entire nuclear weapons program, even with a firm commitment to do so from Pyongyang.

Trump's White House seems ignorant not only of the technical obstacles to denuclearization but also the strategic challenges. Their firm belief, for example, that Kim is willing to denuclearize unilaterally, is a case in point. North Korea sees nuclear weapons as the ultimate protection against foreign threats—particularly U.S. aggression—and that is why Pyongyang won't simply give them up in the face of economic sanctions and tough talk. Significant economic and security concessions from the United States would be required as a mutual compromise, and even then it would be hard to get Pyongyang to forfeit its nukes entirely.

Third, President Trump seems to be doing this for the wrong reasons. Sure, the White House may genuinely want denuclearization, but not, it seems, because of a rational assessment of America's threats and interests. Instead, Trump is eager for the prestige that would accompany an unprecedented deal with North Korea, a success none of his predecessors were able to accomplish. He is far more fixated on basking in the glory of favorable primetime cable news coverage than the substance of a serious non-proliferation agreement. This means the administration's approach is going to eagerly look for quick wins with little in the way of depth or substance, and therefore not much lasting value.

The conundrum of all of this is that talking is better than the bellicosity that preceded it. Given a choice between incompetent, mismanaged diplomacy for the wrong reasons, on the one hand, and inching ever closer to the brink of catastrophic war with a nuclear-capable North Korea on the other, I choose the former any day. But Americans may simply need to resign themselves to lower expectations. They will have to accept a prolonged negotiating process filled with fumbles until President Trump learns the basics or his successor takes over.

John Glaser is director of foreign policy studies at the Cato Institute.