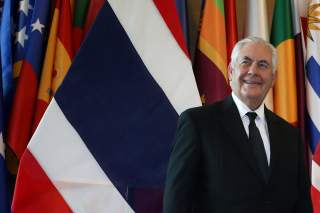 Nit-picking, leaking, hand-wringing, Monday-morning quarterbacking—these have been busy times over at the State Department. But the good news is that the man in the corner office, Rex Tillerson, seems to have a clear vision for what he wants to do at and with the sometimes fractious department. And, if the secretary is successful, the United States will have a much better instrument of statecraft than the one he inherited.

Tillerson’s brief tenure has sparked much comment and speculation. Eric Terzuolo, a former foreign service officer, opined that the secretary set exactly the right tone from the start. Conversely, syndicated columnist Michael Gerson recently wrote: “If Cabinet members are to be judged by the gap between expectation and performance, Rex Tillerson is among the worst.” One press report claims the secretary is headed for an early exit from government. Another denies it.

The consensus is as clear as midnight on the dark side of the moon.

Here is what is known. Compared to previous secretaries, Tillerson is spectacularly uncommunicative outside official channels. Last week, he held a press briefing, speaking at length on a number of issues.

That was rare. Here is why.

Invariably, when Tillerson makes public remarks, reporters and pundits ignore the points he wants to stress. Instead, they stampede to find some sentence that will allow them to assert that the secretary “breaks with the president.”

Tillerson has little use for over-hyped controversy that does not contribute to getting the department’s message out or advancing U.S. foreign policy. So he just doesn’t engage.

Whether this “cone of silence” policy will shift over time remains to be seen. When people start focusing on what the department is doing, rather than what controversy they can whip up, the secretary may change his ways. Until then, when he has something to announce, he’ll announce it. Otherwise, he’ll just work.

And he works a lot. When it comes to the high-level tasks of statecraft—meeting with heads of state, exchanging views among high ranking officials, negotiating on the administration’s behalf and speaking at international forums—he has been every bit as energetic and engaged as past secretaries. Having talked to heads of state, embassy staff, parliamentarians and government officials from many countries in several parts of the world, the feedback is very positive. They consistently report Tillerson to be professional, well-informed and persuasive.

The secretary certainly also seems to have the confidence of the president. When he took the job, he got some straightforward advice from former Secretary of State Jim Baker: “that the most important thing for a secretary of state to have is a seamless relationship with his president.” Baker stressed that “it’s really important because the president is Numero Uno in the formulation and implementation of the nation’s foreign policy.” Tillerson certainly seems to have taken this counsel to heart.

Administration insiders report that the president, in turn, values his secretary—although that notion runs counter to the media narrative that portrays the two as constantly at odds.

It is also clear that Tillerson has a close-working relationship with the vice president and other key officials including White House Chief of Staff John Kelly, Defense Secretary Jim Mattis, UN Ambassador Nikki Haley and National Security Advisor H. R. McMaster. Folks that work in the inner circle of the foreign policy and national security team agree that the group work closely together. Yes, at times there are serious disagreements, and the discussions get heated and intense. That’s because they are hammering at tough issues, not because they don’t share common cause.

Few in the know dispute that Tillerson is earnest and hardworking. But within the department, there are still concerns about budget; plans to reorganize and downsize, the lagging pace of political appointments and lack of engagement with the department staff. There is a lot blank space when it comes to explaining what the secretary is up to. In these situations, Washington does what it always does: fills the vacuum of information with a plethora of speculation. But is any of this speculation even remotely on point?

Here is what we know. The administration’s first proposal for the State Department budget included deep cuts. Some complained that the cuts would be disastrous and signaled a lack of interest in soft power. Others noted that to requested cuts would simply take the department back to 2008 funding levels, eliminating the bloat, inefficiency and superfluous programs accumulated during the Obama years.

It is clear is that Tillerson himself has been focused less on the budget per se. He appears more concerned about getting the mission, structure and functions of the department right—believing that the need for appropriate resources would logically flow from that.

Tillerson started by commissioning a broad survey of department personnel. The results were not made public, though there were a number of reports spinning the contents with claims ranging from uncovering deep dissatisfaction to proposing how to restructure foreign aid. But those who have seen the overall findings of the report suggest they reveal what Tillerson is really trying to get at: an understanding of what the department does and doesn’t do well, why, and how that all matches up with what he wants the department to accomplish.

During the Obama era, the State Department responded to virtually every pet project of the administration by adding new offices, envoys and tasks. This resulted in competing offices within the State Department (like the Bureau of Counterterrorism and the Office of Global Engagement), gross inefficiencies (such as least ten IT systems), competition for resources, concerns over diplomatic security, reduced support for the embassy country teams and erosion of the integration provided by the regional bureaus. There was too little integration of the tools of statecraft and inadequate coordination with the other instruments of national power.

That was pretty much the takeaway from the survey—and the secretary seems determined to fix it. In short, Tillerson wants a State Department that is less process and churn, less advocacy and advertising, and more focused on actionable deliverables.

Is what Tillerson is trying to do dangerous and unprecedented? Not really. It’s not much different from the approach taken by his fellow Texan—Jim Baker.

Baker was White House Chief of Staff for Ronald Reagan and later ran the Gipper’s reelection campaign. With a reputation for expertise on domestic affairs, Baker nonetheless became Secretary of State for George W. Bush from 1989–92. He then moved over to be Bush’s Chief of Staff.

During his tenure at State, Baker witnessed the fall of the Berlin Wall, the collapse of the Soviet Union and the Gulf War—enough foreign policy for a lifetime. “The world I had known my entire adult life changed,” he recalled in an interview. “And so how we handled things after that was extremely important.”

But what is just as notable is how he took over the department. As an outsider, he started measuring up the place, top to bottom. He began with a few trusted aides. As he vetted career staff at the department, finding those who were capable, competent, and supportive of the president’s agenda, he widened the circle of trust, adding in political officials until he had the team he wanted, doing the job he wanted. People that could not get the job done or weren’t supporting the president’s policies had to be, frankly, weeded out or at least moved aside to where they would do no harm. It was a methodical and deliberate effort to lead a department that notoriously prefers not to be led.

By taking the time up front to steer the ship of state, even as turbulent times swirled around him, Baker was better able to run the department over the long term.

This is, of course, a very different model from Hillary Clinton or John Kerry who mostly floated atop the State Department, largely content to implement the decisions made by a small inner circle in the White House. It is, perhaps, this jarring difference in approach that has Washington in a dither over the future of Foggy Bottom.

Baker has been publicly critical of Trump and his foreign policy. Yet, in Tillerson he might just see a bit of his own old operating style at work. Baker described Tillerson in an interview as having “the management qualifications and the negotiating qualifications. . . . And so, I think he has the qualities that are very, very important . . . and that are needed in a secretary of state.”

That said, there are differences between the two that make it harder for Tillerson to just follow in Baker’s path. Baker was a master at using the media. He had powerful connections in the press and used them often and effectively to get his narrative out there. Tillerson has radio silence.

Baker also had a trusted posse of close aides he could draw on, experienced Washington hands he could bring on board to push his agenda within the department. Tillerson has a handful of aides, surrounded by a horde of people who were happy with how Obama’s foreign policy got done.