Time for America to Abandon Afghanistan 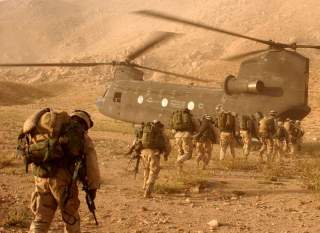 Experts and pundits were stunned last week when Taliban forces overran most of the northern Afghan city of Kunduz.  Although government troops appear to have retaken portions of the city, they were able to do so only with substantial assistance from the U.S. combat units that are still in the country.  Now General John Campbell, the U.S. commander, is urging President Obama to delay the planned withdrawal of the remaining 9,800 U.S. troops and to retain a permanent garrison that is much larger than the president’s plan for 1,000 military personnel.  If President Obama unwisely complies with that request, Afghanistan will be on its way to being a permanent nation-building quagmire for Washington.

Senator Rand Paul (R-KY) asked the question that many Americans likely harbor: why are we still in Afghanistan more than 14 years after the initial invasion in response to the Taliban regime’s decision to shelter al Qaeda?  It is an especially pertinent question since even the U.S. military concedes that there is no longer a significant al Qaeda presence in Afghanistan.  We are now (and have been for several years) almost exclusively at war with the Taliban, whose agenda (while socially repulsive) is focused on that country and does not pose a credible threat to the American homeland.  Senator Paul is absolutely correct that it is well past time for anti-Taliban Afghans to step up and defend their own country without relying on the United States.

Unfortunately, what happened in Kunduz is all too typical of the fruits of U.S. foreign policy over the past half century.  U.S. administrations seem to have a knack for picking corrupt, unmotivated foreign clients who are spectacularly unable to prevail against domestic adversaries.  The Obama administration’s fiasco of trying to train a cadre of “moderate” Syrian rebels to counter both Bashar al-Assad’s regime and ISIS is only the most recent example.   Despite spending more than $400 million, the number of graduates from the program that are still fighting is in the single digits.  That training effort may well set a new record for an expensive, ineffectual government boondoggle.

Then there is the Iraqi army, trained and equipped at great expense to American taxpayers.  When ISIS launched its offensive last year to capture Mosul and other cities, Iraqi troops seemed intent on setting speed records to flee their positions and let the insurgents take over with barely a struggle.  ISIS captured vast quantities of sophisticated military hardware that Baghdad’s troops abandoned in their haste.

That episode reminded older Americans of the performance of the U.S.-backed ARVN—the so-called army of the so-called Republic of Vietnam--in early 1975.  The collapse of the ARVN’s resistance to the offensive that communist North Vietnam launched that spring was shockingly rapid and complete.  Indeed, it was so fast that the U.S. embassy in Saigon was barely able to evacuate its diplomatic personnel before North Vietnamese troops captured the city.

These and other incidents beg the question of why the foreign clients U.S. leaders choose habitually perform so badly.  They are characterized by thin domestic support, poor organization, and lousy morale.  Their domestic adversaries always seem to be better organized, more competent, and far more dedicated.  Given the extent of the failures in so many different settings, Washington should realize that lavishing funds on preferred clients cannot make them credible political and military players in their countries.  And continuing to backstop such inept clients with U.S. troops merely wastes American lives.  Despite General Campbell’s wishes, it appears that we are on the verge of being taught that lesson yet again—this time in Afghanistan.

Ted Galen Carpenter, a senior fellow at the Cato Institute and a contributing editor at The National Interest, is the author of ten books and more than 600 articles on international issues.  His latest book, coauthored with Malou Innocent, is Perilous Partners: The Benefits and Pitfalls of America’s Alliances with Authoritarian Regimes (2015).