Time for America to Ally with the Kurds 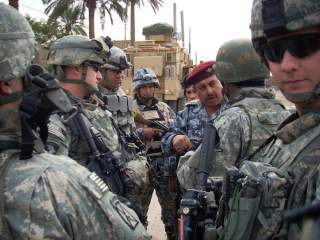 As a former State Department political officer who served in Iraq and who saw conditions dramatically improve in 2008/9 at the tail end of the “Surge,” words cannot describe my visceral reaction to the recent collapse of American policy in the region. As a military historian, I am sure that recriminations over the causes of American defeat have only just begun—but the priority of our policy makers should be to adjust our posture in the region in accordance with the material realities of this dark time in the history of American arms. The United States should thus acknowledge that the dream of a unified and multiethnic Iraq has turned into a nightmare, accept the country’s de facto partition, and throw our lot in with our only remaining effective allies in Iraq—the Kurds.

When I was in Iraq in 2009, political space existed in Iraq for a centrist government that could bridge the sectarian divide between Sunni and Shia and allow the Kurds enough autonomy to fulfill their aspirations while not destabilizing the Iraqi state. That moment has passed.

For understandable reasons, Iraq’s Shia now see an existential threat on the horizon, which threatens sites sacred to both their faith and to their lives. In the absence of an effective Iraqi state, they will turn to the only available forces capable of securing their interests—Shia militias affiliated with various political parties and more direct military aid from Iran, which has already started flowing into the country. Nevertheless, in the end, Persian military assistance and sectarian militias will fail to restore peace to the country—they will ensure that Samarra and Baghdad do not fall under direct ISIS control, but they cannot secure Baghdad in the long term against a continued stream of suicide bombers flowing in from Sunni environs to the North and West of the Iraqi capital.

Furthermore, even if the Maliki government had a serious desire to garner Sunni support, the very existence of Iranian forces in Iraq makes impossible the cultivation of moderate Sunni groups in the North and West, whose support will be needed to drive ISIS out of its newly conquered territories. The United States could coopt and cultivate moderate Sunnis during the Surge, because as non-Muslims from a far-off land, Americans have no historic stake in old and deep rivalries in the region between Sunni and Shia, Arab and Persian. A few years ago, a more broad-minded and inclusive Shia political leadership than Maliki’s could have found common ground with Iraq’s Sunnis due to their shared Arab heritage and a real sense of common Iraqi identity, but increasingly visible Iranian intervention in Iraq will alienate what few moderate Sunnis remain alive in the North and West. Even if ISIS’s violent and extremist rule eventually leads to another “Awakening” against them among Iraq’s Sunnis—a phenomena that may be occurring in Anbar as we speak—that does not mean the Sunni opponents of ISIS will accept the legitimacy of a Baghdad government so obviously dependent on Iranian support. But without external support from Baghdad, it is difficult to believe that local Sunni opponents will be able to expel the hardened and savvy fighters fielded by ISIS—at least in the short term.

Finally, even in the extraordinarily unlikely event that Shia leaders emerge who can appeal to that deep, but sometimes submerged, current of Arab nationalism that they share with Iraq’s Sunnis, the very forces that might unify Iraq’s Arabs will only sow divisions with the Kurds. When I served in Iraq in 2009, Maliki reached out to some Sunni tribes, but part of that outreach involved Maliki pushing back against Kurdish influence in disputed regions in north-central Iraq—because in a shared distaste for Kurdish autonomy, Maliki could find common ground with Sunni nationalists. Dexter Filkins has chronicled the sad story of the more sectarian course Maliki chose after the 2010 parliamentary elections.

Maliki’s own incompetence, however, has created a historic opportunity for the Kurds. The power vacuum created by the rise of ISIS and the collapse of the Iraqi Army in Northern Iraq has allowed the Kurds to assert control over the strategic city of Kirkuk and push into other mixed and disputed areas, including my former posting in Tuz Khormato, and no one should expect the Kurds to give up those gains—especially because the Kurds rightly believe that only their own military forces can protect them from the excesses of ISIS.

Could serious American military intervention revive the dream of a multiethnic and nonsectarian Iraq? Perhaps; but even if a relatively small footprint of American Special Forces backed by airpower could expel ISIS forces, only a large American military presence comparable to what entered Iraq in 2003 would provide sufficient leverage to American policy makers to broker the political compromises and bargains necessary to save the Iraqi state. Does anyone seriously believe the American people would support such a course?

If north-central Iraq is fated (for at least the near term) to be at best a violent and war-torn charnel house, divided between ISIS forces and more secular, armed Sunni groups who will quickly grow weary of the former’s religious excess, or worse yet, a secure safe haven for ISIS to continue radiating murder and mayhem throughout the region and perhaps beyond, then from the perspective of American interests, what is to be done?

The United States should throw its weight behind the Kurds in exchange for security and intelligence cooperation that includes a modest American military presence, while still refusing to recognize formal Kurdish independence. From secure bases in Kurdistan, American military and intelligence assets should aim to disrupt ISIS and other similar groups in order to ensure that both north-central Iraq and Syria do not become safe havens and training grounds for terrorists hoping to strike at western targets. Moderate Sunni opponents of groups such as ISIS should be encouraged if they emerge, but Americans should be realistic about our limited leverage in the region at this point.

ISIS-trained extremists with battlefield experience and Western passports returning to their home countries present a nightmare scenario to say the least. For all its reluctance to act militarily in Iraq and Syria, this administration has already established precedents for these sorts of limited counterterrorism operations in Pakistan and other environs. Even if ISIS at the moment has no ambitions to strike at Western targets, the situation demands monitoring, and only secure American bases in the region can provide the eyes and ears American intelligence agencies will need to prevent possible future attacks.

It would be a mistake to romanticize the Kurds—the Barzani clan has its own authoritarian tendencies, but compared to the current rulers in Mosul and Baghdad, Kurdistan’s sunburst flag shines bright. Furthermore, Kurdish and American interests align closely enough to build a durable alliance—the Kurds will not only want to keep the murder and mayhem associated with ISIS out of their territory, they will welcome our de facto support of their expanded sphere of influence. Most Kurds view the United States as one of the crucial midwives of their current golden age, while good relations between Kurdistan’s and Turkey’s governments should also assuage the latter’s concern with the potentially destabilizing effects of a too-independent Kurdish state.

When I served in a mixed part of Iraq that included Kurds, Turcomans (Sunni and Shia) and Sunni Arabs, I helped carry out an American policy that aimed to restrain Kurdish ambitions out of the reasonable belief that Iraq’s diverse and variegated population made a peaceful partition impossible. Sadly, partition through violence now defines Iraq’s political geography. In the long term, I believe that Iraq’s Shia will become weary of playing the cat’s paw to Iran’s geopolitical ambitions, especially since the latter will not be able to truly deliver on the promise of providing consistent security in Baghdad. Iraq’s Sunnis will also eventually repudiate the likes of ISIS, which is already sowing the seeds of its own future demise. But in the meantime, America must reimagine its strategic policy to take into account the painful consequences of its recent defeat.

Wayne Wei-siang Hsieh teaches military history at the United States Naval Academy. He served as the State Department’s senior political officer in the district of Tuz Khormato between 2008 and 2009. These views represent his own and in no way, shape, or form represent official U.S. Government policy.