Time for Australia to Stop Punching Below Its Weight 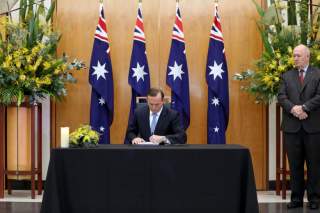 Australians feel deep sorrow and righteous anger at the shooting down of MH17, a despicable act that has caused the largest single loss of Australian life overseas since the 2002 Bali bombing.

In the aftermath of the crime, Canberra has conducted itself admirably. Tony Abbott has been strong and clear in his response. By speaking earlier and more plainly than other international leaders, he has stiffened the West's response to this outrage.

For once Russian President Vladimir Putin is off balance. Now the international community must maintain the pressure on him to implement Monday's UN Security Council resolution and support an impartial investigation, the return of our dead, and the resolution of the Ukraine conflict that Moscow has fomented.

For his part, Bill Shorten has been scrupulous in his support for the government's approach.

There has been some small-minded commentary to the effect that the PM has acted provocatively or overstepped the mark. But we should not be surprised that Australia has influenced the tenor of the global debate on MH17. Often the world takes us more seriously than we take ourselves.

The old saw that Australia ''punches above its weight'' is wrong. We are not a heavyweight, but we are certainly no flyweight. We are a successful, prosperous country with effective diplomats and a capable military. We are now the president of the G20 and an elected member of the UN Security Council. Given the scale of our losses, why shouldn't we be leading from the front?

If anything, it is more common for Australia to punch below its weight class than above it. Long stretches of Australian foreign policy have been marked by laziness. After all, for most of our history the world was run by our great and powerful friends – first the British Empire, of which we were a constituent part, and then the United States, of which we are a close treaty ally. On occasion, this happy situation bred complacency.

Now these friends are becoming less great and powerful. In the Middle East and Eastern Europe, U.S. reticence and European fecklessness has eroded the deterrent power that might have caused dictators and strongmen to stay their hands.

In Asia, interstate tension is increasing as half a dozen large countries jostle for advantage. In the past year, Beijing has become increasingly assertive, to the point of driving others into Washington's arms. Yet Americans' readiness for the contest with China is unclear. President Barack Obama's ''pivot'' to Asia made powerful strategic sense when he outlined it to the Australian Parliament in 2011, but in the past three years, as Washington has been distracted by troubles at home and abroad – including the misdeeds of Vladimir Putin – the pivot has run out of puff.

First, we are a country with global interests – not least the welfare of the million or so Australians who are abroad at any one time. We need to take global issues seriously, because they directly affect the lives of our people. There are serious concerns, for instance, about jihadism returning to our shores along with the Australian nationals fighting in Iraq and Syria. At the other end of the scale, imagine the effect on Australia if there were great-power conflict in the East or South China Seas.

In the 1980s, Australians conducted a lively and intelligent debate on economic reform. We are capable of having a similar conversation this decade on Australia's place in the world. If this means seeing less of Clive Palmer on television, well, sacrifices must be made.

Second, we should use all possible avenues to advance our interests and values. It seems strange to recall now that there was significant opposition to Australia's campaign for a seat on the Security Council. The advantages of speaking in one's own name, on the biggest issues, in the world's most important crisis-management forum, are so plain that few other countries would think of debating it.

Council membership has lent Tony Abbott and the tireless Julie Bishop authority and leverage as they seek information and justice on behalf of the Australians on board MH17. It has provided an essential vehicle for our diplomacy.

Third, Australia needs a larger foreign service. Australian diplomats are thin on the ground in much of the world. We have no mission in Kiev, for instance, and the Department of Foreign Affairs and Trade will be stretched in its efforts to respond to MH17.

It is madness for a country like Australia – located in a rapidly changing region and reliant on international trade and investment – to have the smallest diplomatic network in the G20.

The final lesson from MH17 is that Australia can make a difference. In the past week, the PM has struck the right chord and tilted the international discussion in the right direction. Former chief of the Defense Force Angus Houston is helping to lead efforts on the ground in Ukraine. Australian diplomats in New York have secured passage of a strong UN Security Council resolution while their colleagues have comforted the families of the dead.

MH17 shows us that we should see ourselves as players in the world, not commentators. It is time for us to put aside childish things.

Michael Fullilove is the Executive Director of the Lowy Institute. His latest book is Men and Women of Australia! Our Greatest Modern Speeches (Viking). This article first appeared in the Sydney Morning Herald here.