Time for Common Sense About ISIS 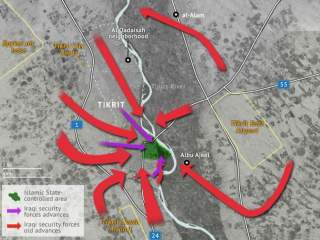 Politicians and terrorism experts have a vested interest in focusing on the worst-case scenarios about terrorism and putting the direst spin possible on recent events. With the near irrelevance of core Al Qaeda, Islamic State (ISIS) is the latest fixation. Terrorism should always be an area of serious concern, but we need to assess the current problem rationally. ISIS, though lethal and threatening, is a manageable problem that is largely on the wane. We can accelerate its eventual demise with smartly applied pressure and lethal force, international cooperation, and patience. Here are twelve points to consider:

We are beating the Islamic State. That’s right. It peaked two years ago, after successfully taking the Iraqi city of Mosul when the Iraqi Army laid down its arms and fled. Since then, ISIS has slowly but steadily been retreating from its controlled territory—it has lost 40 percent of its holdings in Iraq and 20 percent in Syria. This is happening without deploying U.S. combat troops in significant numbers. The Islamic State is failing as an insurgency.

ISIS’s grand strategy—such as it is—is make an enemy out of everyone. ISIS has no state sponsor, and every state neighboring its territory is its enemy. In 2014, ISIS picked a pointless fight with the Syrian and Iraqi Kurds, and it has subsequently suffered serious battlefield defeats. It is now being pressed on two fronts, by Assad’s army around Palmyra and the Iraqi paramilitaries outside Mosul. Even the Turks, at first reluctant to get involved with ISIS, now have to respond more forcefully to terror attacks in Istanbul.

The Islamic State’s battlefield tactics are inferior. After initial successes, ISIS has wasted valuable troops in poorly conceived operations. Its decision to expend thousands of lives to take the town of Kobani last year demonstrates weak command and control and little regard for its own forces.

Its ideology has no possibility of inspiring a mass movement. ISIS really is a predatory criminal enterprise masquerading as a religious movement. It depends on attracting soldiers of fortune, career criminals and life’s losers from the West and neighboring countries. Many of them have died and will continue to die or be captured. When lS takes over a town, the locals depart in droves. Most ISIS-held cities have largely depopulated. (Hence the refugee crisis.) The local Sunni Arab tribes, when not intimidated, become ISIS’s enemies.

ISIS isn’t doing anything we haven’t seen before. It doesn’t have improved terrorist tactics or technology. Its bomb making skills are nothing special and, as we learned from Brussels, it is forced to use unstable explosives like TATP. It relies on radicalized criminals to conduct these attacks. And these vicious acts, though momentarily destructive, won’t cause Western nations to change their fundamental policies.

ISIS has attacked very soft targets and its success has been in part due to local incompetence. The French responded poorly to the December attacks; police forces were very slow to deploy and arrived after the killing was done. Belgian authorities were on high alert, but they neglected to follow some leads and to defend major transportation hubs, even though these are logical targets.

The Islamic State’s global spread is exaggerated. Most groups worldwide who have pledged allegiance to ISIS—Al Qaeda in the Islamic Maghreb, Boko Haram in Nigeria —have been around for years, and many are as ineffective as ever. This trend to identify with the ISIS cause probably hasn’t led to a noticeable uptick in global terrorist activity.

ISIS-inspired terror largely remains confined to the countries we destabilized. Global terrorism today is concentrated mainly in countries whose governments we overthrew after the reaction to 9/11 or to the 2011 Arab Spring. We need to face the fact that this ISIS problem is largely a self-inflicted wound. Here is the one lesson our foreign-policy community needs to internalize the most—even bad governments might serve some useful purpose for regional stability.

Carpet bombing ISIS won’t work. Since 2014, we have launched thousands of sorties against ISIS. In December, the Pentagon estimated it had killed an estimated 20,000 fighters—but it took 28,000 bombs to do it. We are wasting expensive ordnance on low-value targets in many cases. Intensified bombing might also lead to more ISIS human-rights abuses in retaliation. A more intensified air campaign likely wouldn’t accomplish much.

We should refrain from putting more boots on the ground. Many of our domestic terrorists—Major Hasan, the Tsarnaev brothers—claim to have been motivated by the specter of Americans killing Muslim men in combat. Our military support and lethal aid for impacted nations needs to be low-key.

Preventing people from joining ISIS makes sense. Arab and European nations, Turkey, and Russia have allowed too many people to join ISIS. We need to help friendly Arab countries like Egypt and Tunisia prevent foreign fighters from going to Syria. The FBI has stopped some Americans from joining ISIS and closely monitors ISIS sympathizers. So far, few Americans have joined the group. We have suffered very few attacks associated with international jihad since 9/11. Solid police work will mitigate the threat.

If the Islamic State conducts a Brussels-like attack in the United States—and that is unlikely—we must stay the course. Our fundamental anti-terrorism strategy is sound. We should avoid exacerbating the problem with panicky moves against local communities or foreign, fragile states.

Michael J. Ard, a former intelligence officer, is a security consultant and lectures on international security at Rice University.