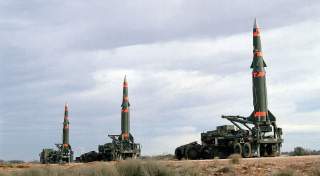 Speed kills. This simple but powerful concept applies in spades to strike assets—particularly when speed and lethality can be obtained at sufficiently low costs to be deployed at scale. Consider, for instance, China’s intensive investment in ballistic missiles as part of its ongoing anti-access/area denial (A2/AD) strategy aimed at restricting U.S. forces’ capacity to operate and project power along the country’s maritime periphery during a potential conflict.

The current crop of U.S. precision-strike platforms, especially those with the standoff range to cope with an increasingly deadly People’s Liberation Army integrated air-defense system, tend to be expensive or launched by scarce and expensive aircraft and fly slowly. To blunt China’s growing asymmetric advantage and retain strategic credibility with regional allies, U.S. forces need a prompt regional strike capability that is reliable, cost-effective and legal. Modernizing and improving the MGM-31 Pershing II medium-range ballistic missile design and deploying it at sea would fulfill all three requirements.

First, the Pershing system uses a fully developed, 1980s-vintage airframe that could be resurrected, mated with modern guidance and warhead systems, and pressed into service much more rapidly and cost-effectively than new hypersonic weapons systems built from scratch. The core challenge in producing Pershing II missiles, or a modernized follow-on version, centers on retooling and training the workers responsible for the manufacturing process, rather than developing entirely new systems and technologies from the ground up, which is what the Pentagon’s Prompt Global Strike program is doing with the Advanced Hypersonic Weapon. The fact that a Pershing II derivative can likely be brought into service more quickly than other hypersonic strike systems would allow it to play an important “gap filler” role as the Pentagon builds out a full hypersonic weapons portfolio.

Second, the Pershing II would also likely be more cost-effective than other regional hypersonic weapon options, both in terms of the cost of the missile and the cost of the associated launch infrastructure. A 1983 Congressional Budget Office report suggests the unit cost of the Pershing II was $4.2 million, or approximately $10.1 million in 2016 inflation-adjusted dollars. In other words, each Pershing II round could likely be had for the price of a single Standard SM-3 ballistic missile interceptor or two Standard SM-6 missiles—both of which would likely be tasked to defend against China’s DF-21D antiship ballistic missile.

The Sea Launch commercial space launching platform gives a sense of potential “high-end” launch system costs, while the modification of the USS Ponce gives a sense of the time and costs that a simpler capability might entail. Sea Launch aims to provide equatorial ocean-based space launch services. To do so, the company utilizes a converted semisubmersible drilling platform that has been extensively retrofitted to support the launches of massive, liquid-fueled Zenit rockets.

Replicating Sea Launch’s path of converting a semisubmersible drilling platform would be the more expensive route. A fairly recent data set from ODS-Petrodata (via the U.S. Energy Information Administration) showing construction costs for semisubmersible platforms and drillships reveals that the ninety-three semisubmersibles in the dataset cost an average of $593 million, while the 140 drillships carried an average price tag of $700 million. If the structure of the vessels was changed from the outset with a mission of missile launching in mind, then that would allow the yard to forego adding the drilling rig and fitting other labor-intensive internal equipment needed for a vessel to drill reliably in harsh deepwater environments. The potential reduction in vessel cost from building the ship frame without the drilling equipment suite is not clear, but it seems reasonable that it would knock at least $125 million, if not more, off the cost numbers found in the ODS-Petrodata data set.

Sea Launch built a deck structure capable of withstanding the thermal violence wrought by a space launch vehicle lifting off with more than one million pounds of thrust. Indeed, the Launch Platform Odyssey Vessel even managed to survive an epic on-deck explosion of a massive Zenit-2S rocket largely intact. The physical toughness of Sea Launch’s platform suggests the engineering barriers to creating a vessel able to sustain launches of the much smaller Sea Pershing–class missiles, which would likely have forty thousand to fifty thousand pounds of thrust, would be meaningfully lower, and thus less expensive. The platform’s launch system could—and should—be kept as simple as possible and consist of few hangars from which transporter erector launchers (TELs) can drive onto the reinforced launching area.

If global oil prices remain low, then there is a strong likelihood that commercial drillship and semisubmersible platform owners would be willing to entertain purchase offers for idle equipment. As of September 2016, Bloomberg reported that nearly half of the global floating rig fleet was sitting idle. Additionally, deepwater contractor Ocean Rig believed that as of April 2016, the global fleet might need to shed nearly two hundred units to fully rebalance itself. Other classes of large commercial ships—including bulk carriers, container ships and oil tankers—are also suffering from overcapacity and could offer conversion opportunities.

The possibility of essentially having a ship with a large flat “driveway” from which TELs can be driven onto from a hangar, shoot their missiles and then drive back in for reloading (or be reloaded by a crane on deck) also suggests that existing naval transports or amphibious warfare vessels or merchantmen could be converted at far lower cost than building new platforms. The cost advantages of retrofitting suitable existing platforms are exemplified by the conversion of the amphibious transport dock USS Ponce into an “afloat forward-staging base,” an act which cost $65 million, as opposed to the estimated $1.5 billion it would have cost to build a new vessel for the desired purposes.

With potential per-vessel costs in the range of $450 million to $550 million (and perhaps closer to half that amount for converted bulk carriers or containerships), the outlays are significant in absolute terms, but pale in comparison to the $4.2 billion average unit cost of the U.S. Navy’s Zumwalt destroyers or the nearly $13 billion price tag of the new USS Gerald R. Ford. The Navy’s USNS Montford Point expeditionary transfer dock, which was based on a converted oil tanker, costs $500 million per vessel. This analysis assumes that the ship to carry Pershing II missiles would cost $500 million per vessel and that each missile round would collectively cost $20 million. On that basis, the Pentagon could deploy twenty-five Sea Pershing II Prompt Regional Strike vessels for the cost of a single new nuclear carrier and could build an inventory of more than two hundred missiles for the price of a single Zumwalt-class destroyer.

Third, a sea-based version of the Pershing II would confer powerful prompt regional strike capabilities while keeping Washington, DC compliant with its obligations under the Intermediate-Range Nuclear Forces Treaty. In a nutshell, the INF forbids the United States and Russia from possessing ground-launched ballistic and cruise missiles with ranges between 500–5,500 kilometers. Yet the INF in no way restricts sea-based missile systems from operating within the same range envelope, which means that a Sea Pershing II could be legally deployed under the treaty.

In addition, the treaty’s language states that as long as the missile is intended only for sea-based deployment and not launched from the launch platform, which would fire it as a weapon, then it can be tested at onshore facilities. (“A ballistic missile which is not a missile to be used in a ground-based mode shall not be considered to be a GLBM if it is test-launched at a test site from a fixed land-based launcher which is used solely for test purposes and which is distinguishable from GLBM launchers.”)

A cost-effective, highly accurate prompt-strike capability in the East Asia region and beyond would be transformative on the operational and strategic levels. It would place U.S. forces firmly on the “right side of physics” and enable them to credibly—and in an economically sustainable manner—hold a range of land-based fixed-point targets at risk. The Pershing II traveled at Mach 9, bore an 880-pound warhead and could deliver it with a circular error of probability of thirty meters.

The missile’s high speed would also change the profile of “how” U.S. forces can hold various targets at risk because the weapon’s response time is so much faster than that of existing systems. Whereas a Tomahawk Land Attack Cruise Missile fired at a target one thousand kilometers away would take more than an hour to impact, a Pershing II could rain its warhead on the same target from nearly 1,800 kilometers within ten minutes.

Sea-based Intermediate Range Ballistic Missile missile launchers would face the risk of counterattack during a conflict. Yet the system’s presence in theater would complicate the opportunity-cost calculations of Chinese planners by forcing them to choose between allocating precious long-range survivable strike assets, such as antiship ballistic-missile systems, and the People’s Liberation Army Navy’s most modern nuclear attack subs to attack U.S. capital ships (i.e. carrier groups) or instead direct them toward cheaper—but highly threatening—sea-based missile platforms.