Time for a Radical Reset with Pakistan 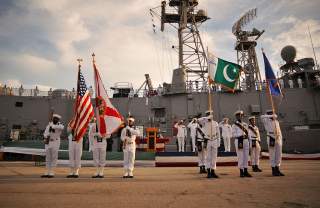 For years and, we would say, for decades, the United States has acquiesced in a toxic relationship with Pakistan, putting up with this nominal ally whose military and security leaders play a lethal double game. Most dangerously, the “game,” if one can call it that, involves headlong nuclear-weapons production and exporting Islamist terrorism.

Successive U.S. administrations haven’t found a way out of this, playing instead the theater of “shared interests” with Islamabad, even when Pakistan’s links with insurgents imperil American lives in Afghanistan while feeding wider instability in central Asia.

None of this is news. Congressional testimony over the years plus expert analysis from in and out of government monotonously reinforce the point: Pakistan has become a quasi-adversary, receiving hundreds of billions through the years in direct and indirect U.S. support, a strange hostage-like arrangement in which we pay Islamabad to do what it should be doing anyway to protect its own domestic security and buttress Afghan stability.

Successive Pakistani military leaders have held their country’s civilian governments on a tight leash. The Pakistani military plays to its various constituencies in Washington very well—especially defense corporations, some residual voices in the intelligence community and parts of the foreign-policy establishment for whom “maintaining access” in Islamabad edges out realism.

Repeat: None of this is news. Each new generation of senior U.S. commanders thinks it can square the circle, relying on “personal” links with Pakistani army corps commanders. Then some new subcontinental crisis erupts, and the immediate need to influence Pakistan pushes aside longer-term goals. For years we looked the other way as Pakistan acquired nuclear-weapons capability, going through the kabuki dance of annual nonproliferation certification.

If none of this is news, what can be done? Colleagues from both parties, in both the House and the Senate, have tried to attach conditionality to successive aid packages for Pakistan. We have supported these moves, which invariably fail.

Conditionality goes back many years. In the weeks after 9/11, for example, the United States offered a grant of many hundreds of millions to Pakistan, on the basis that the money would go towards education reform. Our ally used it instead to write down some of its massive foreign debt. And few forget the wink-and-nudge annual certification that Pakistan was not developing nuclear weapons—which, of course, it was.

How can this weird psychology be reversed? Over the years, the broad strategic balance has shifted against Pakistan which, unlike its neighbor to the east, fails to invest in human capital. Unlike the impression of imminent dissolution (which Islamabad likes to give as an excuse for tolerating domestic extremism), Pakistan in important ways is actually a strong state. But as Amb. Robert Gallucci, a prominent nuclear weapons expert, pointed out to a closed-door meeting of congressional staffers on Tuesday, it’s not enough to wait until Pakistani leaders come to their senses.

Instead, it’s time that the United States sets, unilaterally, the limits of its indulgence.

Here are ways we can finally put the toxic psychology behind us:

• Don’t let the next crisis in South or Southwest Asia deflect our focus.

• Don’t rush to shore up Pakistan’s balance of payments via the IMF or other intermediaries, as we’ve done in the past.

• Let China pay that, if the Pakistanis wish to mortgage their future in that way. (China’s “one belt, one road” infrastructure plans for Pakistan are running into big problems.)

Changing our reactive accommodating stance vis-à-vis Pakistan won’t come quickly. But it must change—irrespective of trends in U.S.-India relations, which have steadily come to be on a sounder footing since the George W. Bush administration. There’s a tendency to think of Pakistan as part of a troubling duality, with India and Pakistan in a death spiral. That’s out of date—and we have our issues with India too.

But something must change in our dealings with a terrorist-supporting, irresponsible nuclear-weapons state, and it must change soon. Acquiescing in the current trends is not an option.