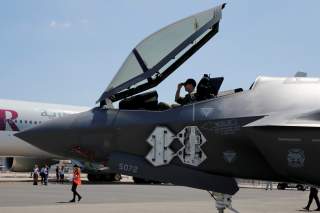 Selling weapons is big business for the United States. The State Department cleared $75.9 billion in arms deals in fiscal year 2017, a one-year record since the Defense Security Cooperation Agency started keeping tallies. President Donald Trump is a firm believer in selling American weapons, aircraft, missiles, anti-air systems, and military technology to overseas buyers, both to grow America’s domestic defense manufacturing workforce and to increase U.S. foreign policy leverage over the countries choosing to buy American. The Cato Institute assessed that Washington has delivered a $197 billion worth of conventional weapons platforms, equipment, and related training services to 167 countries between 2002–2016.

What Trump sees as good business, however, many Europeans see as a contributor to insecurity in conflict zones. This week, the European Parliament passed a non-binding resolution all but condemning the United States for systemically violating end-user agreements and making the world a more dangerous place. While Brussels also denounced European countries like Bulgaria and Romania for skirting European Union arms export procedures, the bloc appeared to put most of the responsibility on Washington. In a particularly pointed provision, the parliament called for an EU-side embargo on defense transfers to the United States.

It’s a stunning rebuke from Washington’s European allies, but a nevertheless understandable one given the vast quantities of American military equipment that have been seized by terrorist organizations on the battlefields of Iraq and Syria. In fact, the Islamic State has been a prime benefactor of a loose U.S. arms export policy, one that is more reflexive—and based on short-term considerations—than strategic. Who can forget the iconic image of the black-clad, long-bearded Islamic State fighter doing doughnuts in a U.S.-manufactured humvee? Or pictures of ISIS militants posing in front of U.S.-made personnel carrier looted from the Iraqi army?

ISIS has gotten its hands on so much U.S. weaponry that Washington has been forced to bomb its own equipment to mitigate the damage. Former Iraqi Prime Minister Haider al-Abadi estimated the loss of 2,300 humvees from Iraqi government stocks during ISIS’s 2014 blitz into Mosul. When Iraqi forces conducted a hasty retreat from Ramadi in 2015, ISIS overran army warehouses and bases, claiming what a Pentagon spokesman at the time said was one hundred heavy vehicles and “maybe a half-dozen tanks.” The terrorist organization even converted “Made in the USA” humvees into nearly impenetrable suicide car bombs, a formidable foe to an Iraqi army suffering from demoralization, poor leadership and exhaustion.

In Syria, American arms destined for moderate opposition factions were forcibly seized by the very terrorist groups the weapons were meant to combat. A 2017 report from Conflict Armament Research found multiple instances of U.S.-purchased weapons from the Balkans being stolen, sold, or siphoned off to more radical groups. Anti-tank weapons made in Europe, sold to America, and transferred to Syrian opposition forces were later discovered in the custody of ISIS. According to the report, “Supplies of materiel into the Syrian conflict from foreign parties—notably the United States and Saudi Arabia—have indirectly allowed IS to obtain substantial quantities of anti-armour ammunition. These weapons include ATGWs and several varieties of rocket with tandem warheads, which are designed to defeat modern reactive armour.”

The Europeans have had their own problems on this score. Balkan nations like Bulgaria, Croatia, and Montenegro—which previously sold Soviet-era small arms and ammunition to Saudi Arabia, Jordan, and Turkey—saw these same weapons being diverted into Syria and Yemen. In some cases, the arms would be wind up in the possession of Islamic extremist groups.

Recent history gives credence to the EU Parliament’s concern on the increasingly influential arms industry. Blowback, whereby arms delivered to proxies can be acquired by adversarial groups and used against you, is a legitimate issue confirmed by the extensive field work of UN investigators and non-governmental arms researchers. End-user agreements, which require the buyer to seek permission from the supplier before selling the weapons to a third-party, are violated repeatedly and with hardly any consequence.

But EU politicians should get their own house in order before pointing the finger at the United States. As much as the EU may like to preach from a pedestal and lecture Washington about the moral hazards of defense sales, EU members are also to blame for the mountain of small arms in the Arab world’s war zones and arms bazaars.