The Time for Swedish Ambiguity on Russia Has Passed 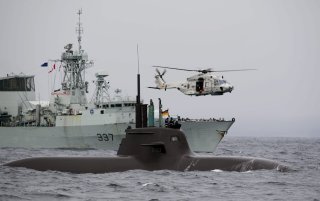 Now that we know beyond a reasonable doubt that even the most severe economic sanctions will not deter Vladimir Putin’s aggression it is time to take more serious retaliation into consideration. Russia’s invasion of eastern Ukraine is a brazen violation of international norms and shows that threats and economic sanctions are insufficient; however, the hardening and strengthening of the transatlantic alliance will at least show Putin the geopolitical price he must pay. If Sweden were to join NATO it probably won’t recover what Ukraine has lost, but it will deter him from taking the next bite as he realizes the coalition against him is growing bigger and stronger than ever.

Sweden is one of America’s most steadfast partners. After the 9/11 attacks, NATO invoked Article 5 of the North Atlantic Treaty calling for collective defense and allied solidarity. Though not a formal NATO ally, Sweden contributed to the International Security Assistance Force in Afghanistan between 2001 and 2014 and stayed on with the Resolute Support Mission until May 2021. In 2014, when the United States called for a global coalition to defeat the Islamic State, Sweden joined. In 2018 when Washington asked its allies and partners to boycott Huawei, Sweden answered. But it is time for Sweden to up its game. After generations of skirting the issue, it is time for Sweden to apply for full, formal NATO membership.

In the chaotic aftermath of World War II, it made sense for Sweden to take the path of neutrality, joining neither the Soviet-led Eastern bloc nor the American-led NATO alliance. The specter of nuclear devastation and the uncertain emerging balance of power were sufficient incentives to avoid taking sides in what was to become the Cold War.

Fast forward to today—the context has dramatically evolved. The Soviet Union is gone, as is the threat of global communism. But Russia is still here; and after a generation of recuperation following the demise of the Soviet Union, Russia—under Putin—is aggressively attempting to reconstruct a sphere of influence under its authoritarian control in bordering Europe and Asia.

Even putting aside Russia’s invasion of Ukraine, the litany of recent Russian aggression is not short: the 2006 assassination of former Russian officer Alexander Litvinenko in the UK, the 2007 cyber-attack on Estonia; the 2008 war and occupation of parts of the Republic of Georgia; the 2014 occupation of Crimea and the ongoing subversion in eastern Ukraine; the 2016 interference in the U.S. election as well as in European elections; the 2016 and 2017 Petya and Notpetya cyber-attacks; the 2018 attempted murder of Sergei Skripal on British sovereign territory; the 2020 cyber-attack on the Colonial Pipeline. Let alone the build-up of over 100,000 Russian troops on Ukraine’s borders. This is only a sample of recent Russian provocations.

Till now Russia has not been held accountable in a manner sufficiently persuasive to deter it from further aggression. Russia and Putin have paid a negligible price for this aggressive, subversive, and bullying behavior. The absence of serious U.S. or Western countermeasures has emboldened Putin, who now issues ultimatums and demands that dramatically impinge on the rights of sovereign nations to determine their own foreign relations. In fact, the anemic retaliatory economic measures taken to date by the West have signaled to Putin that for a price—those resulting from sanctions—he can conquer foreign, sovereign territory.

Sweden itself has been the victim of frequent Russian combat aircraft intrusions of its air space and submarine intrusions in its territorial waters. It recently had to deploy troops to the strategic island of Gotland to discourage further Russian incursions.

Sweden can and should make Putin and Russia pay a price for this behavior—at very little cost to itself, and considerable benefit. Sweden already partners with NATO; participates in NATO-led exercises; and explicitly supports the liberal, rules-based world order that NATO helps to protect, and Russia wishes to dismantle. And to its credit, Sweden has recently upped its defense budget significantly, reinstated military conscription, and revived its Cold War doctrine of total defense—a whole-of-society approach to protecting its national sovereignty from which America could take some lessons. All without the benefit of collective defense—the promise of allies coming to their defense guaranteed by Article 5 of NATO’s founding North Atlantic Treaty.

NATO accession is not a spontaneous process, as it requires the concurrence of all thirty NATO members. So, while sending a powerful signal, Sweden’s NATO application would not instantly create a tectonic shift in the balance of power that might inadvertently provoke a violent, Russian, reflexive over-reaction. Sweden could even choose to opt-out of the process before membership was finalized if it felt its goal had been achieved. But the message itself would be loud and clear; Russia does not hold all the cards.

In the past, there was considerable popular reluctance in Sweden to joining the NATO alliance built upon a tradition of neutrality dating from the early nineteenth century. While there is still reluctance today, recently a parliamentary majority voted in favor of a NATO option, and the majority of Swedes are either in favor of NATO membership or undecided—waiting for leadership to make the case.

For decades, Sweden and Finland have hidden behind an “I’ll go if you go first” strategy. But Finland—once thought the more reluctant candidate—recently and unequivocally proclaimed that NATO membership is today a possible strategic option. For a country with a 1,340-kilometer border with a giant, nuclear-armed, and bullying neighbor, that took balls.

Swedish foreign minister Anna Linde says, “Sweden’s interests are already well-served being outside of NATO.” But Swedes know in their hearts there is more at stake today than Sweden’s interests alone. What about the interests of Europe? It is a question of the defense and preservation of the liberal, rules-based world order that Sweden helped to build and from which it has benefitted immensely, in the hope that those benefits will be available to our children. We who uphold that world order and would resist the authoritarian order that Putin would impose are stronger together in explicit alliance than apart or in an ambiguity.

Michael Miklaucic is a Senior Fellow at the Institute for National Strategic Studies at National Defense University (NDU), and the Editor-in-Chief of PRISM, NDU’s flagship journal of national and international security affairs.