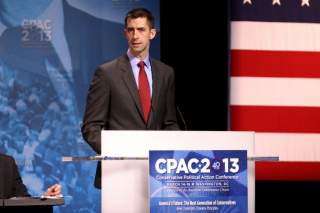 Usually, when forty-seven senators in the same party sign a letter, it gets people’s attention. But I suspect that even Tom Cotton, the freshman senator from Arkansas, Iraq war veteran, and protege of William Kristol, didn’t anticipate the blowback he’s receiving from his missive to the Iranian leadership this week. To their credit, a number of Republican Senators, including Bob Corker, chairman of the Senate Foreign Relations committee, declined to sign.

Cotton may consider the correspondence to Tehran as an educational lesson to the Iranians--whom he apparently views in toto as hardliners--on the U.S. system of governance, but it isn’t the job of legislators to educate foreign governments, especially hostile ones, about the workings of American democracy.

In reality, it is an attempt to dare Ayatollah Ali Khamenei to walk away from the negotiations, derailing the eighteen months of work put in by Secretary of State John Kerry, Under Secretary Wendy Sherman, Iranian foreign minister Mohammad Javad Zarif and the rest of the P5+1 coalition.

Congress, Cotton writes, is the only branch of the U.S. government that has the power to consent to a treaty. Any deal that does not involve a vote from Congress is therefore nothing but an executive agreement. “The next president could revoke such an executive agreement with the stroke of a pen,” the letter concludes, “and future Congresses could modify the terms of the agreement at any time.”

In other words, whether or not the Obama administration and Iran reach a comprehensive nuclear agreement by the end of March, the next president elected in November 2016 and inaugurated two months later (be it Hillary Clinton, Jeb Bush, Scott Walker or some other name currently unknown) will retain the authority to override any and all sanctions relief that the White House provides the Iranians.

You don’t have to read between the lines to grasp the clear message that Cotton is trying to send to Khamenei: don’t waste your time negotiating, because once Obama is out in a year and a half, Washington can renege on whatever concessions that it agrees to.

On the one hand, you can understand why Senate Republicans are releasing an open letter for the entire world to see. For better or worse, the vast majority of the Republican caucus in both the House and the Senate are deeply frustrated with the way President Obama and his negotiators have conducted the talks over the past eighteen months. Lawmakers like Cotton, Lindsey Graham, John McCain and Marco Rubio (among many others) firmly believe that Obama and Kerry have legitimized Tehran’s right to enrich uranium, contrary to a series of UN Security Council resolutions and the wishes of Israeli prime minister Benjamin Netanyahu. The negotiations are in their final three weeks, so those who don’t like what the final agreement looks like are using every opportunity to scuttle a diplomatic process viewed as overtly deferential to the Iranians.

The way Cotton and his colleagues chose to register their displeasure, however, does little to help their case. An open letter to the Iranian government is not designed to give U.S. negotiators pause, nor does it force the P5+1 in general to go back and reassess whether they are receiving all of the concessions that are needed to ensure Tehran’s nuclear program is exclusively peaceful. Instead, it may well confirm the doubts that some in Iran already have that Washington will shred the accord the moment a new administration comes into town.