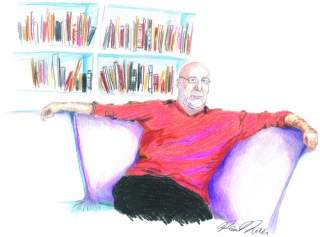 TONY JUDT came to be known to a large audience by his unsparing criticisms of the “war on terror” and his protest against the Israeli denial of equal rights and statehood to Palestinians. Both of those engagements took courage, the second more than the first. Judt was partly secured from the slander to which someone with his views would otherwise have been subjected, because he had a connection (by family at one remove) to the catastrophe of the European Jews. But in any setting, he would have been the first to scorn the professions of group solidarity required by identity politics. He hated the cant of secular tribalism as much as he hated political and religious fanaticism.

Judt grew up in England and spent the first years of his academic career in Cambridge and Oxford, but his perspective on modern history, and indeed his sense of himself, was that of a good European. He knew the distinctions of texture between Vienna, Prague and Milan with the finesse a New Yorker may bring to the finer points of SoHo, Murray Hill and Sutton Place. He owed this topographical mastery to the luck of a privileged childhood but also, as he would acknowledge in a memoir, to the system of trains that connected Europe in the postwar society of his teens and twenties. The trains and the termini that housed them—“these remarkable cathedrals of modern life”—could seem an emblem of the possible civic future of the European Union and the United States. America was for Judt an extension of Europe. He lived in this country happily without giving much study to the wildness of our history. Only the last decade of his writings, including some essays reprinted in this collection, registers a fresh stocktaking. One of the losses of his death is that we are now deprived of his further thoughts on America itself.

All of the essays in When the Facts Change belong to an extended later phase of Judt’s writings on contemporary history. While working on his major book, Postwar, he commented widely on politics and international affairs in articles for the New York Review of Books and other journals. The people he admired, his method of composition, the curious sense in which he committed Europe to memory—these aspects of his temperament are brought out with tact and a fine eye for detail in the introduction by his wife Jennifer Homans. Her sketch brings the reader close to a scholar who was elusive by temperament. For all his capability and forthrightness, Judt was a private, not a public, face.

These essays are written in a variety of tones. When Judt casts his eye over Europe and looks at its prospects for improvement, the manner is apt to be lofty and somewhat disdainful. He wrote in 1996:

The essence of the Franco-German condominium around which postwar Western Europe was built lay in a mutually convenient arrangement: the Germans would have the economic means and the French would retain the political initiative. In the early postwar years, of course, the Germans had not yet acquired their present wealth and French predominance was real. But from the mid-fifties this was no longer true; thereafter France’s hegemony in West European affairs rested upon a nuclear weapon that the country could not use, an army that it could not deploy within the continent itself, and an international political standing derived largely from the self-interested magnanimity of the three victorious powers at the end of the war.

The judicious posture and ironic address are insensibly blended here, as they sometimes were in the writings of George Lichtheim—a British scholar and commentator on similar subjects a generation ago whom Judt has generously acknowledged as an influence and exemplar. The manner is adapted to historical narrative as well as polemics, and Judt combined the two genres as skillfully as any writer of our time. Yet he is capable of asking with urgency, as he did in his 1996 essay “Europe: The Grand Illusion”: “If ‘Europe’ stands for the winners, who shall speak for the losers—the ‘south,’ the poor, the linguistically, educationally, or culturally disadvantaged, underprivileged, or despised Europeans who don’t live in golden triangles along vanished frontiers?” This is a different voice, but a voice familiar to readers of Judt’s causerie Ill Fares the Land: an impassioned appeal from capitalism to the ethics of socialism and the ends of democracy.

That book, a primer written for young people and a small masterpiece of its kind, was an important statement to come from a scholar largely known for his anti-Communist rigor. Some of Judt’s pieces from the late 1990s reflect his continuing preoccupation with his “choice of comrades” (Arthur Koestler, Albert Camus, George Orwell, Raymond Aron, Leszek Kolakowski, François Furet). There was no contradiction between his hostility to Communism and his belief in social democracy. Still, there was a puzzle. Judt was a latecomer to the polemics of the Cold War. Stalinist thugs had left no personal scar on his life. Though he took the opportunity to speak the truth against Communism as late as articles reprinted here from 1995 and 1998, it was by then a well-worn truth and not lacking in Western supporters. His passion was not exactly a “sacred rage.”

Rather, it drew upon the memory of other people’s rage and his own conviction that the generation of 1968 to which he belonged had (as he put it in The Memory Chalet) “missed the boat.” The real action had been in Eastern Europe: “Marxists? Then why weren’t we in Warsaw debating the last shards of Communist revisionism with the great Leszek Kolakowski and his students? Rebels? In what cause? At what price?” Indeed, Judt once grew so warm in defense of Kolakowski that (in an essay reprinted in his earlier collection Reappraisals) he deplored E. P. Thompson’s skeptical “Open Letter” to the Polish philosopher as an insult to the life of reason and conscience itself, and went on to say of Kolakowski’s response: “No one who reads it will ever take E. P. Thompson seriously again.”

So the measured utterance that marks Judt’s essays is not always an adequate index to the emotion underneath. “What Is to Be Done?,” the title of one article here, may be a shopworn phrase—it recurs elsewhere in the book—but Judt’s merely practical directives issue from a sense of duty that is secondary to his larger purpose. He was above all an analyst and a critic. In his well-tempered surveys of the state of contemporary Europe or the new thinking in economics, he is doing good work, but only his mind is in it. The heart of the book lies in his recognition that the main hopes for improvement in the civic life of humanity rest with Europe. This is a large source of his anger at the brutality of the neoconservatives who willfully tore up the compact between Europe and America. They seemed to present Europe with an arbitrary choice: march with the empire now, or quit our company forever.

JUDT WROTE against the war on terror from the run-up to the Iraq War in 2002 until the end of his life in 2010. And in these pieces, an iron enters the prose that is new and unmistakable. The posture is no longer reverence for the heroes of European modernity accompanied by proper contempt for their enemies. It is horror at the insolence and ambition of a party bent on spoiling that inheritance. Two essays, in particular, published early in the new century analyze and denounce the Israeli refusal to accord full political rights to the Palestinians. No explicit connection is offered, yet these will seem to many readers part of the same argument as Judt’s warnings about the war on terror. Perhaps by 2010 they belonged to the same story in the mind of Judt himself. Homans tells us that he withheld from publication a long essay on Israel (printed here) in the belief that the subject finally had become intractable. One reason for this deterioration may have been the way the presence of Israel in American politics was cemented by the war on terror.

The first of Judt’s notable shorter essays on Israel-Palestine, published in May 2002, urged Israel to pursue negotiations in order to assure a “final settlement” and the emergence of an independent Palestinian state. The second, published seventeen months later, saw Israel as having passed the point of no return for the two-state solution and spelled out “the alternative”: a single state, comprising Jews and Palestinians as equal citizens. The latter argument is informed by a pessimistic vision of the new “facts on the ground”: the sheer size of the Jewish-Israeli settler colony in the West Bank, the oppressive effects of the occupation wall on the daily lives of Palestinians and the unabated influence of the Israel lobby in the larger decisions of American policy. “We are now,” says Judt in October 2003 (and by “we” he means the United States) “making belligerent noises toward Syria because Israeli intelligence has assured us that Iraqi weapons have been moved there—a claim for which there is no corroborating evidence from any other source.” It took nerve to write this essay—anger, too—and its sharpness may owe something to an authority Judt possessed from having lived and worked in Israel in his early years. But one is always startled by a writer who can face unpleasant facts and speak them in clear words; the judgment issued in “Israel: The Alternative” is all the more striking because it is so plain. Israel, writes Judt,