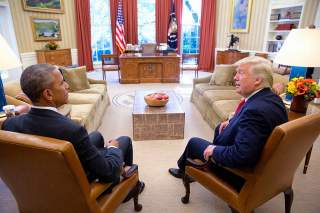 Politicized, wasteful, ineffective, ill-conceived—in the war against transnational Islamist terrorism, all these terms might apply to efforts to fight the war of ideas. This administration should take a sweeping review of Barack Obama’s “Countering Violent Extremism” agenda at home and abroad. The new team in Washington needs to right-size the effort, making it complementary with effective counterterrorism measures and U.S. strategy overseas.

Help Americans Understand the Changing Nature of the War

The global face of Islamist terrorism looks far different from when President Obama took office. Americans understand that, but grasping how the threat has changed can be difficult in a hyperpartisan America where politics define views on foreign and security policy. The national response to the executive order restricting travel from several Middle East countries offers a prime example of politics trumpeting sober analysis. Even before the election there was a strong argument to be made for another 9/11-style commission that could soberly and impartially assess what has changed since the 2001 attacks on New York and Washington and report back to the America people.

Do Not Allow Efforts to Be Captured by Ulterior Motivations

As Heritage analysts Robin Simcox and David Inserra recently wrote about how well-organized Islamist groups are trying to “shut down conversation about the ideological and theological roots of terrorism and make it all about grievances, root causes, and U.S. foreign policy.” Advisers must be carefully vetted. No adviser should be a government stooge or a cheerleader for administration policy, but they all must have an unshakable belief in democracy, equality, tolerance, freedom of speech and the rule of law.

Islamist terrorism is among the most dangerous destabilizing threats in the world today. The movement of foreign fighters is particularly challenging. And political Islam both threatens democracy and promotes extremism. More than ninety Islamist terror plots have been aimed at the United States since 9/11. Promoting generic counter-extremism programs makes no sense. U.S. programs, both at home and abroad, ought to focus on the highest strategic priority. “What we do not need is a counter radicalization program full of garbled and obfuscatory language defining the nature of our ideological adversary,” Simcox and Inserra observe. “This obsession with whitewashing the theological aspects of Islamist terrorism . . . is counterproductive.”

Seven: Limit Domestic Programs and Keep Them Modest in Character

The U.S. population is over 320 million. The entire identified radicalized population in the United States—including individuals actively engaged in plots and convicted of providing material support to terrorism—is less than a few thousand. Further, there is almost no clear, consistent pattern identifying with any particular community or path to radicalization. Indeed, American Islamist terrorists are a tiny data set of any data set other than other terrorists. U.S. programs ought to be scoping for specific communities and threats where a particular need is identified rather than focusing on a broad, national scope.

The main goal should be to identify and interdict criminal activity related to terrorism. Programs should give special attention to activities, such as providing material support, that are precursors to criminal acts.

Washington should not be dictating the needs and scope of programs to state and local officials and law enforcement agencies. Instead, federal engagement should be based on stakeholder input, with federal efforts properly scoped and consistent with national priorities.

Emphasize Support to the Field in Overseas Programs

Although ISIS and Al Qaeda are global phenomena, they manifest themselves based on local conditions. Globally run and managed programs with massive bureaucratic overhead and big staffs in Foggy Bottom are a waste. Further, with limited resources there is a risk of penny-pinching U.S. efforts around the world and accomplishing very little. Instead, U.S. efforts ought to be prioritized and resources pushed to support local programs and be well-integrated with regional strategies that complement other efforts to address radicalization with other instruments of national power and regional partners.

The United States ought to scrupulously review programs to ensure they are supporting our strategic priorities. Too often, “countering violent extremism” has taken the form of handing out grants to NGOs for trips to nice places and feel-good conferences at comfortable hotels. Micro-loans and private sector efforts are often more efficacious than big grants. Further, the United States ought to avoid getting wrapped in proliferating programs to address the so-called root causes of radicalization and the mania of funding development programs to prevent failed states. Conflating development and aid programs with counter-radicalization efforts is a huge mistake. Each of these programs ought to be pursed on its own merits, commensurate with U.S. interests.

One: Drop the Label

“Countering Violent Extremism” is an overly vague term. Lacking clarity and precision of scope and focus, it contributes little to explaining what government programs should be. Perhaps there is no apt label for describing what should be plethora of discrete and crafted activities dealing with a global, but disparate threat. And who needs to engage in a contentious branding exercise anyway? Far better to see the U.S. government just buckle down and do it: fighting effectively the war of ideas against Islamist extremism.

Image: Former President Barack Obama and President Donald Trump squat next to each other in the Oval Office on November 10, 2016. Wikimedia Commons