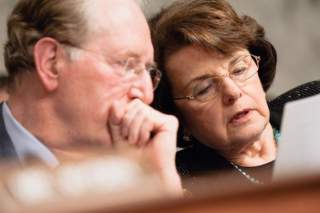 Despite more than a decade of reports that the U.S. government had tortured high-level terrorist suspects, including a frank, if detached, admission from President Obama that the nation had "tortured some folks," Tuesday's release of the Senate study of the CIA's detention and interrogation program was chilling. We learned that some interrogation techniques were "brutal and far worse than the CIA represented to policymakers and others.” And we found out that the CIA willfully and routinely misled, if not outright lied to, everyone from their own inspector general to the oversight committees of Congress and even the president of the United States.

Much of the first day discussion of the report centered on the finding that "enhanced interrogation techniques [were] not an effective means of acquiring intelligence or gaining cooperation from detainees." Despite claims to the contrary from the CIA, Vice President Cheney and others, this is not new news. Decades of experience by police, military and intelligence interrogators around the world had made it clear long before the 9/11 attacks that the most effective means of extracting useful information from suspects is to win their trust. While physical and psychological torture will certainly get people to talk, the incentive created is to say whatever it takes to get relief.

The report demonstrates that this lesson was learned yet again. Almost all of the useful intelligence merely corroborated what was already known from legitimate interrogations and much of the intelligence that was gathered was simply wrong. Indeed, some of the most brutal torture led to the worst intelligence, including information that led U.S. forces to target innocents. And almost all of the touted terrorist plots that were allegedly "disrupted" on the basis of evidence obtained from torture were fantastical at best.

That said, I'm troubled by the line of thinking promulgated by my fellow Wikistrat analyst, Daniel R. DePetris, at TNI:

. . . I believe we can all agree on one thing: the men and women of the Central Intelligence Agency immediately after September 11 were—and remain—in an unfathomably difficult position. The officers, analysts, scientists, and managers of the agency are expected to perform their jobs with the utmost perfection in incredibly rigid time constraints, and are expected to do so without making a mistake that could potentially hurt the strategic position of the United States or result in the deaths of Americans at home or abroad. And these men and women are mandated to do this every single day they trek to agency headquarters or start their workday in the one of hundreds of CIA stations located in dangerously hostile areas.

On the one hand, I wholeheartedly concur that our intelligence professionals are in "an unfathomably difficult position" and are asked to do an essentially impossible job with potentially deadly consequences. On the other, this is the same mindset that lets police get away with killing unarmed civilians with impunity. Those performing dangerous jobs protecting the public deserve our understanding; they shouldn't be above our laws or immune from scrutiny.

Like Senator Dianne Feinstein, the outgoing chair of the committee who courageously released the report, despite bullying from the intelligence community, I "can understand the CIA's impulse to consider the use of every tool to gather intelligence and remove terrorists from the battlefield." But, as she rightly notes, "such pressure, fear, and expectation of future terrorist plots do not justify, temper, or excuse improper actions taken by individuals or organizations in the name of national security."

Oddly, that notion was simply common sense not all that long ago. As a freshman cadet thirty years ago last summer, the laws of war were drummed into me even before I studied battlefield tactics or the capabilities of weapons systems. That military professionals had a sacred duty to protect noncombatants, treat surrendering enemy soldiers humanely, and otherwise uphold our laws and our values, even at increased risk to our own lives and those of the soldiers under our command, was simply a given.

Some have argued that 9/11 and the ensuing war on terror is different, because our current enemy doesn't respect our laws and our values. But we've long fought enemies, including the Vietnamese and Japanese in living memory, who flouted the laws of war, especially against an enemy they considered racially or culturally inferior. Our standard remained unwavering. We followed our values, because they were our values, not because we expected reciprocity. But, as a bonus, we believed our enemies were much more likely to willingly surrender, rather than fight to the last man if they expected humane treatment.

Nonetheless, while I frequently and publicly opposed the use of waterboarding, rendition and all the rest, even in the earliest days after 9/11, and even while strongly supporting the Bush administration, I fully understood why the people with the awesome responsibilities of safeguarding the nation in those days might have thought torture was "worth it." Thus, I'm left in the untenable position of simultaneously believing that the Bush administration acted illegally in many cases and yet not thinking that Bush, Cheney, Yoo and company ought go to jail for these acts. Indeed, I share this odd position with the current administration.

The cynical explanation is that Obama is president now and he doesn't want anyone second-guessing him down the road. But it's also something much more: sitting in the big chair gives him an appreciation of how hard it is to fill. Indeed, more than a decade after 9/11, Obama himself is still making compromises with the law, including the Constitution, which he swore to uphold, in the name of safeguarding the Republic.

The nature of terrorism, like that of crime, frustrates the public and those charged with protecting its safety. In both cases, there is substantial pressure to "bend the rules" in order to safeguard the citizenry. The promulgation of extraconstitutional means for targeting gangsters, RICO as an obvious example, and the advocacy of torture to extract intelligence from terrorists differ only in degree.

Despite taking substantial risk in releasing the report, even Feinstein isn't calling for much more than learning from the past. Aside from imploring her colleagues to formalize Bush and Obama executive orders limiting the worst of the abuses into the law in her introduction, the committee report offers no recommendations. Nobody is likely going to be held accountable in a court of law for torture under the circumstances.

The truth of the matter is that, as with drone warfare and other controversial tactics, the general public is much less concerned about torture than we pointy-headed intellectuals. Again, we've known the broad details about waterboarding, extraordinary rendition and the like for over a decade, and yet:

- A 2005 AP-Ipsos poll found that 61 percent of Americans “agreed torture is justified at least on rare occasions.”

- An April 2009 CBS-NYT poll found 62 percent opposed to Congress holding hearings on the Bush administration’s treatment of detainees. Indeed, the same poll found that, while 71 percent believed that waterboarding is torture, a 46 percent plurality thought it was justified.

- A June 2009 AP-GfK poll found that support for torture had actually increased since their 2005 survey, with 52 percent saying “torture can be at least sometimes justified to obtain information about terrorist activities from suspects,” up from 39 percent four years earlier.

Perhaps the consolidation of information into a single report, the increased perspective brought on by distance from the 9/11 attacks, or details about the creative use of hummus will change the public's mind. But I rather doubt it.

If nothing else, CIA officials who lied to everyone from their own IG to the Office of the Director of National Intelligence to the FBI to Congress and the White House should be called on the carpet. There is, of course, a perversity in going after bureaucratic miscreants for lying about torture while letting the torturers themselves and leaders at the highest level who authorized torture to go free. But there's simply no appetite for going after elected leaders who were overzealous in fighting terrorism.

And as outrageous—and, again, illegal under both U.S. and international law—as the acts of torture against terrorist suspects in our name were, they were at least relatively few in number and long-since discontinued. The notion of a rogue agency taking these actions of its own volition, willfully evading the myriad checks, balances and safeguards built into the system is ultimately even more destructive to our values.