Tough and Tougher: Clinton vs. Trump on North Korea 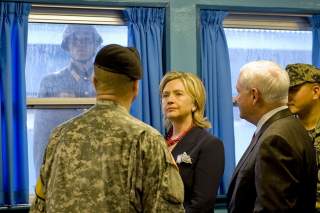 Soon after North Korea conducted its fifth nuclear test, Hillary Clinton and Donald Trump offered their prescriptions for a U.S. response. Each pledged a different, more vigorous approach than that followed by the Obama administration.

With her involvement in the North Korean nuclear issue as secretary of state, Clinton acknowledged that America’s diplomatic and sanctions policies have manifestly failed to curtail Pyongyang’s nuclear and missile programs.

Still, Clinton stated unequivocally that “we are not going to let North Korea pursue a nuclear weapon with the ballistic missile capacity to deliver it . . . That is absolutely the bottom line.”

Responding to a reporter’s question as to how she would achieve that ambitious objective that has eluded administrations for two decades, she proposed to negotiate with North Korea using the approach to Iran she led as secretary.

Yet, those controversial talks at least had as their agreed purpose the demise of the Iranian nuclear-weapons program. North Korea, on the other hand, already has its nuclear and missile systems, and Kim Jong-un has made clear he has no intention of negotiating them away.

If Clinton intends to insist on the “complete, verifiable and irreversible” rollback of Pyongyang’s program, the stated U.S. goal in the Six-Party Talks, there will be no serious new denuclearization discussion with North Korea.

Alternatively, her prospective administration could settle for a freeze, leaving in place North Korea’s existing nuclear and missile arsenal—but in the process, undermining the hallowed Non-Proliferation Treaty. That outcome would conflict with her pledge not to “let” North Korea have a nuclear capability.

Instead, Clinton called for a “rethinking of the strategy” that she and her predecessors have pursued without success. Showing some separation from the administration, she said her new policy would include “an urgent effort to convince the neighbors, most particularly China, that this is not just a U.S. issue,” but theirs as well. In a formal statement, she declared:

South Korea and Japan are critical to our missile defense system, which will protect us against a North Korean missile. China plays a critical role, too, and must meaningfully increase pressure on North Korea – and we must make sure they do.

Clinton said one reason that sanctions are “not enough” is because China has not yet recognized the threat that North Korea presents, and working with Beijing would be “on the top of my list,” suggesting that she would be stronger with China than the Obama administration has been.

“I think we have an opening here that we haven’t had for the last several years that I intend to do everything I can to take advantage of.” She did not specify why North Korea’s fifth nuclear detonation provided more of an “opening” for the West than the previous four.

Pressed by a reporter on what leverage the U.S. has against China, she said, “we have a lot of leverage,” and pointed to an enhanced missile defense system and U.S. military deployments in Asia—both of which “China has no interest in.”

But America’s rebalance or pivot to the region (which actually started at the end of the Bush administration) goes beyond the North Korean threat enabled by China. The U.S. military’s augmentation in Asia is intended more broadly to address China’s own aggressive conduct in the East and South China Seas and its threats toward Taiwan.

That effort, to the extent that it is backed up with the necessary resources and strategic commitment, would proceed even if there were no North Korean threat. So, from Beijing’s perspective, Clinton’s putative new “leverage” over China is either another empty U.S. threat or a policy that is already in place.

Even the U.S.–Republic of Korea missile defense system, which directly addresses Pyongyang’s nuclear program, and which Beijing says it opposes, presents no serious challenge to China. Unless it has an interest in further to enabling North Korean aggression, Beijing should direct its vehement objections to the nuclear-tipped missiles that necessitated a defensive response.

Donald Trump’s reaction to the North Korean nuclear test was, predictably, less nuanced than Clinton’s. He called the situation a “potential catastrophe” and a “big problem,” but said it was China’s problem to solve.

They say they don’t have that much control over North Korea. They have total control, because without China they wouldn’t be able to eat. . . . China should solve that problem. And we should put pressure on China to solve the problem.

Neither Trump nor Clinton called for the imposition of sanctions against the Chinese companies and banks that do business with North Korea and help sustain its nuclear and missile programs. Perhaps that is what Clinton meant when she assured a reporter that “we do have leverage with China.”

Trump did go beyond the rhetoric and offered a specific new pressure point to induce Chinese action on North Korea:

We have total control over China . . . We have China because of trade . . . if they don't solve that problem, we should be very tough on them with trade.

Trump will certainly meet governmental and business opposition to any curtailment of trade with China. Yet officials in successive administrations have failed to offer credible explanations for China’s consistent refusal to exert the vital economic and diplomatic leverage it has over Pyongyang.

The usual rationale, first presented by Henry Kissinger twenty years ago and universally adopted by other experts, is that Beijing fears triggering a collapse of the Pyongyang regime.

But it is difficult to grasp how that government would be endangered by the lifting of Western sanctions, the flow of international aid and investment, and release from international isolation.

It would seem the impoverished North Korean population would welcome such an infusion of material help in exchange for giving up nuclear weapons and missiles they can’t eat. In any event, there is no evidence that Beijing has ever presented North Korea with an offer it could not refuse.

Even taking China’s anti-Pyongyang-collapse rationale at face value, it means that Beijing, for its own purposes, is perfectly content to prop up one of the world’s most egregious violators of human rights. North Korea serves as a useful buffer to keep the Chinese people from being infected with ideas about democracy and human dignity that might flow from a democratic Korea, let alone an ally of the United States. By comparison with the odious Kim family regimes, the Chinese Communist dictatorship is able to pose as a “normal” government in the international community.

An equally plausible explanation for Beijing’s failure to bring the North Korean regime under control—not mentioned by either Clinton or Trump, or for that matter by a multitude of experts over the years: China has derived significant strategic benefits from the emergence of the North Korean nuclear and missile threat.

First, it has constituted a major distraction for the West, diverting diplomatic energies and military resources from other security challenges.

Second, it has dramatically enhanced China’s own diplomatic status by enabling it to posture as a responsible stakeholder and indispensable good-faith negotiating partner in disarmament forums like the Six-Party Talks.

Third, that diplomatic leverage has leached over to a host of other realms and enabled Beijing to parlay its unearned political prestige in pivotal international deliberations. Washington and other capitals tread lightly on Chinese violations of human rights, environmental standards, currency manipulation and trade abuses because, as Sen. Joe Biden once cautioned, “We need China to help roll back North Korea’s nuclear program.”

No matter which candidate emerges as the next president, he or she will need to exercise the considerable economic and diplomatic leverage Washington has over Beijing. If China starts paying a real price for its selfish support for North Korea, a virtuous circle may yet emerge from the menacing quandary the West now confronts.

Joseph Bosco served as China country desk officer in the office of the secretary of defense, 2005-2006 and is a member of the U.S.-China task force at the Center for the National Interest.