Trade, Not Aid, Is the Way to Persuade Pakistan to Buck China's Influence 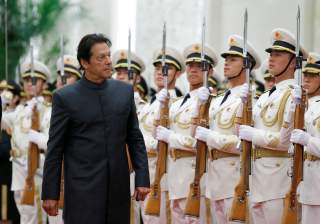 What Wells offered was a polemic that presented two competing approaches to foreign aid and investment, focusing on what China has gotten wrong and what America has gotten right.

Wells rightly noted that CPEC, with its controlled-bidding processes and unclear contractual terms, falls short of offering the sustainability and transparency critical for developing countries like Pakistan to grow over the long term. And she correctly asserted that CPEC is not an exercise in Chinese philanthropy, given that infrastructure projects are mainly funded by loans and Chinese companies are earning handsome guaranteed profits by selling comparatively expensive electricity to the Pakistani grid. America, Wells claimed, provides an alternative development partnership model, pairing grant assistance with support for policy reforms aimed at attracting private sector investment.

But that is only half of the story. The U.S. civilian aid program in Pakistan is actually far from a success. And China is attempting to make corrections to its economic partnership with Pakistan that could position itself as an alternative to the Western aid model. As the U.S. development assistance portfolio in Pakistan shrinks, Washington risks losing influence in a strategic region if it continues to offer mere words in response to CPEC. The most effective way America can offer an alternative to CPEC is not by offering more aid, but through expanding trade, with an emphasis on Pakistan’s textiles and apparel industry.

America’s Aid Industrial Complex Has a Mixed Record in Pakistan

Since 2009, the United States has given over $4 billion in economic and development assistance to Pakistan through the Enhanced Partnership with Pakistan Act or EPPA. The program has resulted in some shared U.S.-Pakistan achievements. For example, the United States Agency for International Development, or USAID, facilitated the construction of energy-starved Pakistan’s first liquified natural gas terminal and supply procurement contracts. Also, Pakistani mango exports have grown from $28 million in 2011 to $73 million in 2018 (or 160 percent), thanks in part to USAID assistance in developing a mango processing and logistics infrastructure that allows for Pakistani farmers to comply with export market regulations.

Unfortunately, the EPPA’s successes are outweighed by its failures. USAID’s own Office of the Inspector General (OIG) assessed in 2016 that roughly 30 percent of the EPPA awards funded “did not meet intended goals” and 55 percent only met them partially. More broadly, the OIG report states that the program also suffered from a conflict between the State Department’s security-driven “shorter-term priorities,” including stabilizing conflict-hit areas distant from industrial centers, rather than USAID’s long-term objectives focusing on “economic growth, education, and health.”

Not only is the “American model” not the success that Wells makes it out to be, but it also bears similarity in some ways to the Chinese approach. Both CPEC and EPPA ostensibly adhere to the recipient government’s long-term economic plans, but in practice, they have been project-oriented and contractor-driven, disproportionately benefitting donor country surrogates, including Chinese state-owned enterprises and for-profit American development companies, as well as Pakistani rent-seekers.

Nadeem-ul-Haque, a former top official with Pakistan’s main economic planning body, has correctly described USAID as an “aid-outsourcing agency.” U.S. companies like Chemonics and John Snow, Inc. each receive hundreds of millions of dollars a year from USAID and have been among the major recipients of EPPA funds.

With the disparate nature of EPPA inflows and considerable outflows, the end result is this: despite the billions spent, EPPA did not meaningfully catalyze economic growth in Pakistan. From 2009 to 2013, the Pakistani economy grew at an average annual rate of three percent.

To be fair, fueling growth was not the singular goal of EPPA, and Pakistan during these years was hit with a perfect storm: an unprecedented wave of terror, epic floods, and crippling energy shortages. And ultimately, it is the Pakistani elite that bears responsibility for why their country has failed to develop the human capital, governance system, and regulatory environment that are requisites for sustainable growth. But as I will explain later, Washington opted for a massive aid program for Pakistan when focused trade concessions, paired with a more modest aid portfolio, could have been far more effective in transforming the Pakistani economy.

China is a Lender, Not a Development Partner—For Now

As it stands, CPEC also offers no recipe for fueling long-term sustainable growth. From 2014–2018, as billions in CPEC funds flooded into Pakistan and security improved, the country’s economy grew at an average rate of 5.2 percent. This period of expansion, however, was short-lived. After peaking at 5.7 percent in 2017, Pakistan is now stuck in stagflation, with growth below 3 percent and inflation in the double digits. Rather than transforming the Pakistani economy, CPEC deepened its structural imbalances, contributing to a boom driven by household consumption and government spending, as Pakistani exports declined. Facing a balance of payments crisis, Pakistan last year went to the International Monetary Fund for its twenty-second bailout.

But, despite its flaws, CPEC has produced tangible results. Over $12 billion in projects have been completed, including seven thousand megawatts MW of installed electric power and large upgrades to Pakistan’s national highway network. But the China-Pakistan economic relationship is far from the “win-win” Beijing claims it to be.

Since the China-Pakistan free trade agreement (FTA) took effect in 2006, Islamabad’s trade deficit with Beijing (excluding Hong Kong) has grown by over 500 percent. According to Pakistani official data, Pakistan’s exports to China grew from $506 million in 2006 to $1.8 billion in 2018, but its imports from China surged from $2.9 billion to $15.3 billion over the same period. As with many other countries, Pakistan’s free trade agreement with China has had a devastating impact on its domestic small and medium enterprises. Beijing and Islamabad have a strategic partnership, but the Chinese remain cutthroat competitors in trade.

However, as CPEC heads into its second stage, there is potential for China-Pakistan trade dynamics to change, perhaps even fundamentally. In response to Pakistan’s economic crisis and complaints about the trade imbalance from Pakistan’s business community, China has made concessions that could reduce its trade surplus with Pakistan.

Earlier this year, Beijing provided Islamabad with $1 billion in temporary trade concessions. And this month, the second phase of the China-Pakistan free trade agreement came into effect, with 313 tariff lines from Pakistan, such as textile goods and meat products, receiving zero-duty status. Next year, Chinese companies could also begin to invest in CPEC special economic zones or SEZs as well as Pakistan’s extractive industries.

There are reasons to be skeptical that these measures will achieve their desired results. But sustained, diversified foreign direct investment in Pakistan and growth exports are essential to Pakistan’s economic rehabilitation. China has the potential to be the economic partner that gets Pakistan on that path. And so does America.

Why Exports Matter for Pakistan

Pakistan’s export weakness goes beyond its trade relationship with China. The country’s stagnant exports are arguably the biggest missing piece of its growth puzzle and why its economy heats up well before reaching double-digit rates of growth.

When it comes to exports, Pakistan is a laggard compared to its peers in South Asia. In 2018, exports made up 8.5 percent of Pakistan’s gross domestic product or GDP, compared to 14.8 percent for Bangladesh and 19.7 percent for India.

The Bangladeshi economy—now the fastest growing in South Asia—has been catapulted by apparel exports. The apparel sector makes up roughly 80 percent of Bangladesh’s exports, which have surged past Pakistan’s since 2014, growing by almost $8 billion since then—despite the fact that Pakistan’s textile industry is vertically integrated and Bangladesh is a net importer of raw material and fabric. Bangladesh has had a singular focus on value-added apparel exports, leveraging its domestic gas reserves and low wages to attract FDI in its export processing zones. It is just the latest country whose experience demonstrates how the textiles and apparel sector can drive growth and fuel rising incomes in emerging markets.

Textiles and apparel are also Pakistan’s largest exports and the United States is Pakistan’s biggest single-country export destination. Expanding the Pakistani textile and apparel industry’s access to the U.S. market would be the among most effective ways to fuel economic growth in Pakistan. It seems like common sense that a U.S. strategy for catalyzing aggregate growth in a country population of two hundred million would prioritize the mass production of goods, instead of a dizzying array of programs, including training low-volume handicrafts artisans.

America Has an Opportunity to Address Pakistan’s Export Challenge

Given that the textile and apparel industry runs on low margins, tariffs are an important factor impacting competitiveness. Jordan, for example, imports energy, labor, and raw materials, and even labor, but it has emerged as a major apparel exporter to the United States as a result of their bilateral FTA. Though Pakistan has a preferential trade relationship with the United States through the Generalized System of Preferences or GSP, Pakistan’s main textile and apparel products are not zero-rated. They are hit with double-digit tariffs, as is the case with most GSP beneficiaries.