Trade Tussle: America Needs to Capitalize on Its Relationship with Taiwan 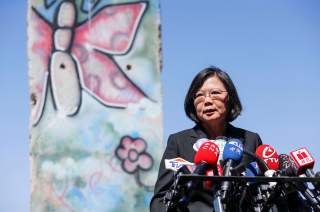 It is imperative that Washington supports Taiwan in its battle to remain independent of China. There are potent opportunities to do so before Taiwan’s presidential and legislative elections in 2020—without America interfering in those elections.

Taiwan has two primary political parties: the Democratic Progressive Party (DPP) and the Kuomintang (KMT). The KMT leans towards unification with China, while the DPP prefers independence. The DPP currently controls Taiwan’s executive and legislative branches, and thus presides over the country’s lackluster economy.

Before Taiwan’s 2020 elections, the United States should execute a free-trade agreement with Taiwan and help it secure others with different countries. Doing so will enrich the agreements’ signatories, reduce Taipei’s reliance on Beijing and demonstrate international support for an isolated Taipei. Most importantly, it will also boost the DPP’s chances of winning in 2020. Furthermore, President Donald Trump should not bypass this opportunity in the hopes of securing Chinese cooperation on other issues.

Chilled Relations Between Taipei And Beijing

When the KMT last controlled Taiwan’s executive and legislative branches (from 2008–2016), the governments in Taipei and Beijing were cozier than ever. For instance, in 2008, regular commercial flights between the countries resumed after nearly sixty years. Also, that was the year that Taiwan suspended its live-fire military drills and waited until 2013 to resume them due to public pressure. Additionally, from 2007 to 2014, yearly cross-Strait trade jumped almost 44 percent. In 2015, the presidents of Taiwan and China met—the first time any leaders of those countries had done so. By that time, Taiwan’s trade with China made up almost 23 percent of Taiwan’s overall trade. Such deep integration with a single market made Taipei vulnerable to economic pressure from and downswings in Beijing.

Fearing that economic reliance on China alone could make unification inevitable, many Taiwanese opposed further connections to China. For example, in 2014, protests erupted after the KMT barred public scrutiny of a proposed trade-services agreement with China. And in January 2016, the DPP, having campaigned to limit further integration with China, swept Taiwan’s last presidential and legislative elections, with the DPP’s Tsai Ing-wen securing the presidency.

As expected, President Tsai has been less pro-China than her KMT predecessor. For instance, she has not endorsed the 1992 Consensus—an agreement between the KMT and Beijing that Taiwan is part of China, with each side supposedly able to determine which entity governs China. Moreover, she initiated a telephone conversation with President-elect Trump—the first time that a U.S. president or president-elect spoke directly with a Taiwanese president since those countries severed formal diplomatic ties in 1979. Also, Taiwan recently broke ground on its first facility to build submarines, which will be used to thwart any Chinese naval attacks. Further, President Tsai has sought closer economic and military ties to Japan, which is China’s long-time rival.

In response, China has squeezed Taiwan since President Tsai took office. First, Beijing cut diplomatic contact with Taipei and convinced five countries to switch their diplomatic recognition from Taiwan to China. Second, China compelled forty-four airlines to remove Taiwan as a displayed country on their websites. Third, by November 2018, Beijing reduced Chinese tourism to Taiwan by over 41 percent. Fourth, China has stepped up efforts to lure Taiwan’s most talented students, engineers, and scientists to China with outsized financial incentives. This brain drain threatens Taiwan’s economy. Fifth, China has ramped up intimidating military activities near the island and, most recently, Beijing sent fighter jets across the center of the Taiwan Strait—the first time in twenty years.

This past November, the DPP lost local elections to the KMT in several important cities. Commentators in China claim that voters turned against the DPP because they rejected President Tsai’s pro-independence platform. Others argue that the DPP lost due to local issues such as the sluggish economy, labor regulations, and LGBTQ rights. Although China’s interference in those elections muddied their results, the latter theory makes more sense.

It is unlikely that voters elected village chiefs and mayors based on President Tsai’s handling of cross-Strait relations. After all, at the time of the elections, Taiwan was in its slowest-growing quarter in over two years. As a survey conducted this past January showed, only 6 percent of Taiwanese felt they were then in a stronger economic position than the previous year, compared to 28 percent who felt worse off. Additionally, that same month, China’s President, Xi Jinping warned Taiwan that unification is inevitable, including by force, if necessary.

President Tsai’s approval rating has dropped below 30 percent, and recent polls show her trailing KMT presidential candidates by double digits. On top of this, she faces a primary challenger—the first time a Taiwanese president has confronted a primary. All of this happened while Taiwan’s quarterly export orders dropped 8.4 percent from the previous year—the country’s largest first-quarter slide since 2009.

Meanwhile, the KMT has been pushing its pro-Beijing line in anticipation of Taiwan’s 2020 elections. For instance, a newly elected KMT mayor visited China, where he called the 1992 Consensus the “anchor of cross-Strait relations.” He is also working to establish economic ties between his city and China, which plays into China’s strategy of creating local links with Taiwan that circumvent the central government.

Moreover, the KMT chairman recently said that if his party wins the presidency, it will pursue a peace treaty to end Taiwan’s civil war with China. Critics responded that such a deal could curtail Taiwanese sovereignty, such as by empowering Beijing to bar Washington’s arms sales to Taipei. In addition, a leading KMT presidential candidate met with Chinese officials last year in Shanghai, where he too endorsed the 1992 Consensus.

Having paid homage to China, the KMT is the selected beneficiary of Chinese meddling in Taiwan’s forthcoming elections. The threat of China exploiting the DPP’s vulnerability is real, as President Tsai recently reported that China has strengthened its campaign to influence the island’s elections and news. Furthermore, Taiwan’s intelligence agency confirmed that China is disseminating fake news on the island to further Beijing’s ends. (Meanwhile, a KMT legislator accused the intelligence agency of fabricating its findings.)

The resolve of Taiwan’s leaders over the next several years is especially important given that President Xi is more likely than his predecessors to take bold steps to unify China and Taiwan. After all, invading Taiwan appears more feasible to China given that (1) the gap between those countries’ military capabilities has grown dramatically; (2) America and its regional partners have not seriously resisted President Xi’s aggressive foreign policy; and (3) China has developed weapons to inhibit other countries from accessing the airspace and waters around Taiwan. Moreover, time is not on China’s side as support for unification continues to dwindle among the Taiwanese. Finally, President Xi has publicly taken a tough line on unification, and he faces no term limits or serious political rivals that would inhibit his plans.

The United States, therefore, has an interest in the DPP winning Taiwan’s elections in 2020. (In time, however, Taiwanese public opinion and China’s visible encroaching on Hong Kong’s sovereignty may force the KMT to shift towards the DPP’s position on cross-Strait relations.)

America should not follow China’s lead and interfere in Taiwan’s elections. Instead, Washington should implement policies that will help Taiwan as a whole, while prioritizing those that will also strengthen the DPP’s election prospects. Among such measures is executing a Washington-Taipei free-trade agreement. And given that Taiwan has few free-trade agreements (because China threatens Taiwan’s potential partners), Washington should help it sign more with other countries, like Japan, India, and Australia. Given that voters’ financial well-being will be a key issue in Taiwan’s 2020 elections, strengthening the island’s economy before then will help the DPP secure more votes.

Even if the economic benefits of these free-trade agreements will not be realized before Taiwan’s 2020 elections, they should be pursued. First, simply announcing future free-trade agreements may elevate the DPP’s standing. Second, given Taipei’s significant reliance on Beijing for trade and investment, diversified economic relationships will decrease Taiwan’s vulnerability to China’s coercion and economic slumps. Third, enriching Taiwan will allow it to increase its defense spending, which is only one-fifteenth of China’s military budget. Fourth, executing free-trade agreements over China’s objections will show that Taiwan has partners willing to face Beijing’s ire—a key to deterring China.

The Siren Call Of Chinese Cooperation

Although President Trump advocates bilateral free-trade agreements, he has not offered one to Taiwan. His goal may be to avoid upsetting China while seeking its cooperation on intellectual property theft, fair trade, and North Korean denuclearization. Indeed, the Trump administration recently announced that it would sell new fighter jets to Taiwan only after Washington and Beijing conclude a trade deal.