The Trade War Is Not Only About Trade 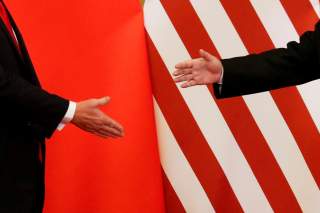 Many have assumed the United States and China would work out a trade deal. The tariffs and threats of further tariffs on Chinese exports to America—and the reciprocal tariffs on U.S. goods shipped to China—were simply part of the negotiating process. It would all get sorted out quickly, and world trade would adjust to the new rules ironed out between the economic giants.

But a funny thing happened on the way to a trade deal—it fell apart in spectacular fashion. Instead of a relaxation of economic hostilities, the conflict escalated with the Trump Administration potentially placing tariffs on essentially all goods from China.

While it is tempting to frame this trade conflict in the context of America becoming tiresome of the treatment of its businesses, this does not capture the true nature of the dispute or its entrenchment and longevity. This is a “restarting of history”—a return of economic and governance ideologies battling for supremacy.

Francis Fukuyama famously announced the “end of history” and the victory of liberal democracy and capitalism over all other challengers. Certainly, there were reasons to be hopeful. Capitalism and democracy had won the Cold War. The competition—Communism and is centralized power system—had collapsed in on itself. To Fukuyama, this was the last stand of a rival ideology against democracy and capitalism. No framework could compete.

But rather than the end of history, 1989 was truly only the end of volume one. And, unlike the Mel Brooks version, there is a volume two.

This was obvious to some nearly immediately following the Cold War. Writing for the New York Times Magazine in 1989, James Atlas suggested numerous ways that history could restart itself, one of which was “a newly industrialized China.”

But in 1989, it was widely assumed that China, and every other emerging economy, would be forced to adopt democratic and capitalistic reforms to remain prosperous and stable. This was the new common knowledge; the world just worked that way. That assumption became a frequently utilized argument—notably by Bill Clinton, who was president at the time. He and others believed that China would adopt democratic and capitalistic reforms because it had to do so to continue its economic rise.

China proved this was not the case, utilizing a single-party structure with more than a hint of authoritarianism. Economic growth initiatives were pushed down from the top, dictating the policies and growth targets. The tools Beijing used are well known to economists—protecting industries from foreign competition (known as the “infant industry” argument) and technology transfers (more commonly known as intellectual property theft) are as old as economics. In retrospect, it was not Beijing’s economic or the political model that drove the success of the Chinese brand of development, but rather the combination of the two.

Suddenly, the democracy-driven capitalist model was not the only game in town. Arguably, it was not even the most successful model. This has created some converts, and now illiberal democracies with tighter economic controls are becoming ever more frequent. Even some of the Eastern European countries, once hailed for their transitions to capitalist liberal democracy, are sliding closer to the China model. Though most remain far removed from outright totalitarianism with a state-controlled economy, it is no longer obvious they will remain this way.

Furthermore, the restarting of history is not without its own problems. It has been nearly thirty years—a generation—since the United States confronted a legitimate challenge to the settled model of capitalism and liberal democracy. Now America sees its brand of capitalism challenged domestically with the rise of democratic socialism, however nascent it might be.

What are the consequences of history restarting? Foremost, the United States has found its new enemy in China’s brand of social and economic regimes. This does not necessitate a “Cold War” between the United States and China, but the clashes over trade and economic conduct are simply indications of far more ingrained issues.

Washington and Beijing’s actions on trade and the escalation of economic tensions should not be underestimated. This is not a short-lived fight for “fairer” trade. It is a fundamental battle of ideologies. A wave of illiberalism and a controlled version of pseudo-capitalism is challenging capitalism and democracy as the model for the world to follow. The guise of economic gains and not “losing” anymore is being used to restart history—if it ever truly ended.