Trading Up: Why America Must Ditch China and Pursue Better Manufacturing Opportunities 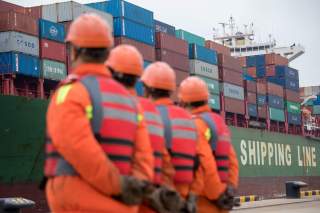 Underscoring the complexity of the U.S.-China trade relationship, careful observers will notice that there are more than two sides vying for influence at the table as negotiations continue in search of a possible deal. In fact, when it comes to the most important strategic question at the very heart of the dispute—what to do about China’s mercantilist campaign to dominate global markets for key advanced technologies—there are at least three contending positions on the U.S. side alone.

The first position, albeit the weakest, holds that China’s tactics—which include stealing intellectual property, coercing foreign companies into handing over their technologies in exchange for market access, and propping up homegrown firms with massive subsidies—are not a major problem. Thus, America should quickly cut a deal even if it doesn’t make meaningful progress in convincing China to abide by the norms it agreed to when it joined the World Trade Organization almost two decades ago. This view is mostly held by Treasury Department officials, who have long cared more about keeping the global financial system stable and humming than about bolstering U.S. competitiveness, and by many international policy mavens at Washington, DC think tanks who are so committed to the U.S. abiding by free trade principles that they discount the challenge of foreign mercantilism (although, in the current political environment, most are loathe to say this too strongly). But given President Donald Trump’s belief that China is a systemic mercantilist whose actions are harming the U.S. economy, it’s clear that this camp has little influence.

The second group are trade reformers—represented by U.S. Trade Representative Robert Lighthizer—who see the current negotiations with China as an attempt to restore some level of “normal” economic exchange between the two nations, but under a new set of enforceable bilateral rules that dramatically curtail China’s unfair trade practices. While that is an important goal, history suggests this group will have a hard time achieving it, necessary though it may be, because China has repeatedly promised to play by the rules, only to embark on creative new ways to transgress.

The third group, call them the decouplers, would not be satisfied with China merely reforming, in part because they don’t believe China ever will. More importantly, they view China as an economic and military threat—as well as a dictatorship that tramples human rights. Led by the national security community, the decouplers believe that U.S. policy must slow down China’s rise and counter its challenge to the United States by inducing U.S. companies to leave China, limiting U.S. technology exports to China, and dramatically reducing Chinese investment and trade with America.

While decoupling is appealing—at least to those who fear either China’s growing power or its continued abuse of global trade norms and human rights—done wrong, it would likely come at the cost of U.S. prosperity and competitiveness. For example, when the Trump administration proposed banning U.S. sales to Huawei, the leading 5G telecom equipment maker in the world, it appeared that the company would be able to turn around and get the valuable components it needs from other nations, so U.S. companies—and workers—would lose. Banning U.S. sales to Huawei, including for network equipment, would do nothing to make U.S. networks more secure—that was accomplished by Trump’s ban on imports from Huawei. It would, however, weaken U.S. firms. Likewise, when the decouplers harangue U.S. companies to stay out of the Chinese market, they inhibit U.S. economic growth while helping Chinese competitors. For example, the U.S. economy would be stronger if Google reenters the Chinese market, even with a censored search engine, because if Google is even moderately successful there, it would take market share away from Baidu, its Chinese rival, which would help Google and the broader U.S. tech ecosystem instead of giving Baidu an uncontested domestic market and bolstering Chinese tech competitiveness.

To be sure, one of the decouplers’ goals is a good one: constrain China’s ability to project power by weakening its economy and slowing its progress toward dominating global technology industries, which most assuredly will come at the cost of U.S. competitiveness and jobs. If we want the United States to maintain its leadership position in advanced technologies—and we should—then the administration’s policy should involve some decoupling. But instead of limiting sales and investment in China by fiat, the Trump administration should work toward market-based decoupling that effectively loosens China’s grip on global production.

The first step should be to help other nations that might serve as alternative centers for foreign production. That would provide U.S. companies with more locations for their global production systems. Already, tech imports from China to the United States are down while imports from Vietnam and India are up. The Trump administration should provide a tail wind for this shift. But threatening tariffs, as Trump has done with Vietnam and Mexico—two countries that are ideal alternatives to China—increases uncertainty rather than decreasing it. Instead, the administration should not only make clear it will not impose tariffs on China alternatives, it should push for free trade agreements with those countries. To start with, Congress needs to expeditiously pass the United States-Mexico-Canada Agreement (USMCA). The administration also should seek to join the Trans-Pacific Partnership Agreement, which is now called the Comprehensive and Progressive Agreement for Trans-Pacific Partnership. If the administration has concerns about CPTPP, such as lack of an enforceable currency regime, then it should seek to join with proposed changes. Both steps would make it clear to global companies that if they move production out of China to one of these partner nations, they will not be subject to punitive tariffs in the future.

Skeptics might wonder whether these policies would discourage production moving back to the United States from China, and if so, then why would that be in our interest? First, it is in the U.S. interest because every job that leaves China reins in its economy and thus shrinks the giant checkbook it uses to bankroll its foreign influence programs, from its “One Belt, One Road” initiative to its base-building campaign in the South China Sea. Second, as long as there is a significant labor component to this production work, then it is unlikely to return to the United States because labor costs are higher here. The real question is not whether global companies will move production from China to the United States; it is whether they will move out of China to a third country. If this production were to move to Mexico, then the United States would benefit much more because proximity would lead to more reciprocal imports from Mexico.

The second tactic in a market-based decoupling strategy should be to weaken China’s comparative advantage in manufacturing and strengthen America’s manufacturing industry by establishing a national moonshot initiative to modernize and automate U.S. factories. There are various manufacturing applications for new technologies, including 5G, sensors, robotics, and artificial intelligence, which, with the right policy support, could significantly improve factory productivity, making it possible for much of the U.S. manufacturing sector to be a competitive alternative to China. But without a national manufacturing automation strategy, this vision will be fruitless. Among other steps, Congress should dramatically increase funding for programs under the National Institute of Standards and Technology to help small manufacturers automate; expand funding for the National Science Foundation’s National Robotics Initiative to at least $600 million a year. Also, it should establish at least ten new public-private institutes under the Manufacturing USA program to focus on automating key manufacturing subsectors. And most importantly, lawmakers should implement a ten-year investment tax credit of 25 percent for all investments in automation equipment. If successful, then such policies could hem in China’s manufacturing economy while strengthening America’s manufacturing economy.

There is no going back to the U.S.-China economic and trade relationship that existed before Trump, which created the conditions for China’s mercantilism-powered rise. But there can be and should be a strategy that pushes China to reform while also strengthening U.S. companies, U.S. workers, and the U.S. economy.

Robert D. Atkinson (@RobAtkinsonITIF) is president of the Information Technology and Innovation Foundation, the leading think tank for science and technology policy.