The Tragedy of the Trump Administration 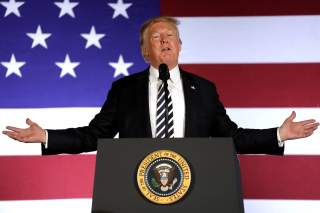 A normal administration braces itself for Bob Woodward’s books. There are always unflattering revelations, perfect quotes and clear signs of who cooperated—and who didn’t.

Donald Trump isn’t exactly presiding over a normal administration, so it’s not surprising that the firestorm will be worse. The president volunteered too late to be interviewed, but his White House is filled with people with little else to do but knife each other in the back. And they seldom pass up the opportunity.

Woodward’s reputation makes it more difficult to dismiss than obvious hatchet jobs written by Michael Wolff and Omarosa Manigault Newman, the latter a grifter who could only be a notable figure in Trump’s White House (though she did work for Al Gore in Bill Clinton’s). But some relatively respected inside the administration have already disputed caustic quotes attributed to them, including Defense Secretary Jim Mattis and White House chief of staff John Kelly.

Fear: Trump in the White House will be released on Tuesday, after more than a week of Washington striking back at Trump. There was John McCain’s funeral, from which the president was pointedly excluded, designed to showcase bipartisan unity against Trump. Then came the first Woodward book excerpts, followed by the anonymous New York Times op-ed alleging a “Resistance” of sorts even in the White House, almost a slow-motion invocation of the Twenty-fifth amendment.

Both Woodward and the anonymous senior administration official paint a similar picture: an out-of-control president whose government is being held together by a string thanks to the herculean effort of the adults in the room. That the narrative is substantially true—Trump is erratic, impulsive and does not understand or appreciate the limits of his office; his subordinates spend an inordinate amount of time trying to contain his more reckless impulses—doesn’t make it less self-serving.

One problem is that they don’t distinguish between the worst of those impulses—incendiary rhetoric, not infrequently on matters related to race; loose talk of tightening libel laws and pulling broadcast licenses; public criticisms of private citizens; an apparent longing for the Justice Department to stop investigating those in his orbit and start probing his political opponents instead—and areas of legitimate policy disagreement.

Trump’s tariffs may be bad policy, for example, and they certainly represent a minority opinion in Washington. But he campaigned on them fairly clearly and it is what the people, especially in the industrial battleground states that decided the election, voted for. He has, wisely or not, the statutory authority to impose them unless Congress wishes to change that. And other presidents have been allowed to reduce economic growth in pursuit of other debatable goals (so far, growth remains robust).

The foreign-policy criticisms are maddening. Yes, Trump says irresponsible things. But when given advice, he actually defers to the national-security establishment to a fault. And some of what these insiders find horrifying about Trump says more about that establishment than it does Trump.

“The soldiers on the ground could run things much better than you,” Trump allegedly complained to his generals about Afghanistan. “They could do a much better job. I don’t know what the hell we’re doing.”

Trump went on: “How many more deaths? How many more lost limbs? How much longer are we going to be there?” Only in official Washington are these considered unreasonable questions to ask about a war that has gone on for seventeen years, longer than World War II against a much weaker foe, long after its achievable objectives were realized.

If there is a criticism of Trump, it is that he did not follow these insights to their logical conclusion and instead acquiesced to sending more troops.

A common thread of the Woodward book, the New York Times op-ed and the McCain funeral: there is no accountability for elite failures or even a recognition of how they paved the way for political climate they so frequently lament. Trump has yet to initiate something quite as disastrous as either the wars in Iraq or Libya, mistakes that can apparently be wiped away by passing a piece of candy at a memorial service.

Trump is a bull in a china shop, posing nearly as much a danger to his own presidency as anyone else. But the finest dishes were broken or stolen long before he got to the store.