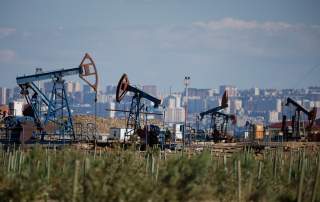 In 1906, the first energy pipeline in the South Caucasus was completed, connecting Baku on the Caspian Sea with Batumi on the Black Sea. The pipes used in the construction were actually made in Mariupol, Ukraine—an indication of the broader region’s interconnectedness which prevails to this day.

That first pipeline measured a mere eight inches in diameter and transported kerosene. Today, more than a century later, it has been replaced with a modern network of natural gas and oil pipelines connecting the heart of Asia with Europe.

Even with all the region’s current pipelines and those still under construction, there is still one important missing piece: a Trans-Caspian Pipeline for natural gas.

Right now, there is no profitable way to get Central Asia’s gas to Europe without going through Russia. A pipeline is the only economically viable way to move natural gas across the Caspian Sea. Transporting natural gas by ship as liquefied natural gas is not profitable at such a short distance.

A Trans-Caspian Pipeline has the potential to change the energy landscape of Europe. According to the latest estimates available, the Caspian region holds 292 trillion cubic feet of natural gas. That makes the region of the greatest reserves in the world and one that could be exploited with improving technology.

There are three reasons to push for a Trans-Caspian Pipeline now.

First, there is the progress being made with new pipeline projects in the region. Azerbaijan started delivering gas to Turkey in mid-2018 via the Trans Anatolian Pipeline (TANAP) and is poised to send gas to Italy via the Trans Adriatic Pipeline (TAP) by next year. Also next year, the Southern Gas Corridor (SGC) is expected to start delivering gas from Azerbaijan all the way to Europe. With an expandable capacity of thirty-one billion cubic metres, TANAP and the SGC will be able to deliver gas from any future Trans-Caspian Pipeline.

Second, Europe, Azerbaijan, and Turkmenistan all need a Trans-Caspian Pipeline, albeit for different reasons. Europe is actively seeking alternatives to Russian energy resources. Azerbaijan is trying to cement its position as the region’s most important energy player. Turkmenistan faces a severe economic crisis and needs to find new markets for its natural gas.

Finally, the Convention on the Legal Status of the Caspian Sea, signed by all five Caspian littoral countries last year, allows pipelines to be established with only the consent of the countries involved in the project. This is a major change for the better. In the past, Iran and Russia argued that any pipeline must first have the agreement of all five littoral states. The new agreement could finally give the green light for a Trans-Caspian Pipeline once the two interested parties, in this case Turkmenistan and Azerbaijan, come to an agreement.

While the ultimate goal would be a fully-fledged pipeline delivering natural gas from the eastern shore of the Caspian to the Western shore, Baku and Ashgabat ought to be more modest with their ambition at first.

For the Turkmens in particular, lowering the level of ambition would be difficult. Ashgabat has already constructed the so-called East-West pipeline, a 483-mile long natural gas pipeline connecting the country’s Mary province in the east with Turkmenistan’s Caspian coast. The East-West Pipeline has the potential to transport thirty bcm annually. Understandably, Turkmen authorities want any future Trans-Caspian Pipeline to match this capacity, but this is an unrealistic goal in the beginning.

Instead of constructing a pipeline first, Baku and Ashgabat should instead focus on constructing an interconnector between offshore fields of Azerbaijan in Caspian and offshore fields in Turkmenistan . Over time, options should be explored to include Kazakh gas fields using interconnectors, since some Kazakh fields are in close enough proximity to be commercially viable.

This modest approach early on would accomplish three things.

First, it would be a proof of concept—a tangible, quick, and affordable way to demonstrate that the eastern side of the Caspian can be connected to the western side of the Caspian by a pipeline to deliver natural gas. Building an interconnector linking up Turkmenistan and Azerbaijan’s existing gas fields would need to be only approximately sixty miles long and could be constructed for only $500 million compared to an estimated $1.5 billion for a full Trans-Caspian pipeline. An interconnector would be a significant step forward contributing to the long-term energy security of Europe.

Second, an interconnector would help build confidence and trust between Azerbaijan and Turkmenistan. These two countries do not have an agreement on their maritime borders in the Caspian, and there has been tension and confrontation between the two in the past. For a Trans-Caspian Pipeline to become successful, both will to have to trust one another—and eventually agree to a maritime border.

Finally, an interconnector would likely be more politically acceptable to Russia and Iran than a full-blown pipeline. Although the Caspian agreement states that a pipeline can be built as long as the countries involved in the project give consent, it is likely that Russia and Iran would find other ways to delay or even prevent the project from happening. However, considering current geopolitical circumstances sees both Russia and Iran heavily engaged elsewhere around the world, it is very possible that an interconnector would be below the threshold that would otherwise ring alarm bells in Moscow and Tehran.

Completing the Trans-Caspian Pipeline promises several benefits, even for the United States. Interestingly, some in the Trump administration are recognizing this. In a recent letter offering America’s Nowruz wishes, President Trump reportedly wrote to his Turkmen counterpart, Gurbanguly Berdymukhamedov: “I hope that Turkmenistan will be able to seize new opportunities for exporting gas to the West following the recent determination of the legal status of the Caspian Sea.”

For the United States, the most obvious benefit of a Trans-Caspian Pipeline is that it would improve Europe’s energy security by giving it another alternative to Russian and Iranian gas. Greater European energy security will lead to more stability. This, in turn, could indirectly affect U.S. treaty obligations under NATO.

The pipeline would also improve regional stability by calming Azerbaijani–Turkmen relations, which have been strained in the Caspian over the past few years. From Ashgabat’s perspective, a Trans-Caspian Pipeline would also help to diversify its energy export market, which is dependent on China and Russia.

The Caspian region has come a long way since the single kerosene pipeline in 1906. A Trans-Caspian Pipeline coupled with the Southern Gas Corridor would alter the geopolitical landscape in the region and beyond.

With Nord Stream 2 looking more and more like a reality, the Trump administration should champion alternative energy programs like the Southern Gas Corridor and Trans-Caspian Pipeline with the same vigor the Clinton administration brought to the Baku–Tbilisi–Ceyhan pipeline in the 1990s.

Now is the time for American leadership.