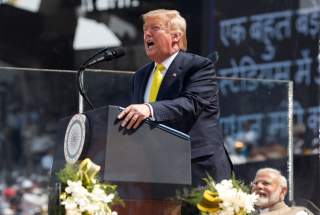 If President Donald Trump and Indian Prime Minister Narendra Modi decide to sign the first U.S.-India free trade agreement in the wake of the president’s visit to India this week, it would represent the most important trade deal of his administration.

A strategic partnership between the world’s oldest and largest democracies, as America’s leading India hands have argued, has the immense potential to craft renewed order in the Indo-Pacific region. The primary flaw in the U.S. approach to India, they believe, is that wishful thinking compels Washington to assume the viability of an alliance of democracies. In reality, India “prizes policy independence above all.” As a result, “Washington and New Delhi should strive to forge a partnership that is oriented toward furthering common interests without expecting an alliance of any kind.”

The traditional U.S. alliance model will not work for India. Still, these same experts on India who believe that the traditional basis for U.S. foreign policy in the postwar era—the American-led liberal international order—is a sound strategic concept and that Washington and New Delhi should base their partnership upon it. In bipartisan fashion, the two most recent U.S. ambassadors to India agree, with former U.S. envoy Richard Verma noting that Washington and New Delhi can be “guarantors of the democratic and liberal democratic order.” Meanwhile, sitting ambassador Kenneth Juster has declared that both can “ensure a free and open region, where the rule of law and democratic principles are reflected in a rules-based order.”

In this strange consensus, India experts all seem to suggest that India is perfectly positioned to revive the liberal order. Instead, the two countries should align their vital interests. What U.S. policymakers must realize is that the liberal order is over, and a new world of nineteenth century-style great-power competition, spheres of influence, and a brewing Cold War mean that India should be courted on the basis of new geopolitical hardware—not outdated software.

The great operator of the liberal order, Henry Kissinger, may as well have declared its death in 2018 when he told the Financial Times, “I think Trump may be one of those figures in history who appears from time to time to mark the end of an era and to force it to give up its old pretenses,” he said. “It doesn’t necessarily mean that he knows this, or that he is considering any great alternative. It could just be an accident.” It is no mystery that the “old pretenses” Kissinger spoke of were a reference to the faith foreign policy elites persistently pledge to the liberal order. Still in shock over Trump’s victory, the policy community chooses to think of the president as an aberration in the robust order that was supposed to extend from Harry Truman to Hillary Clinton. NATO-bashing, trade wars with China and allies, and the overarching “America First” foreign policy platform, they believe, will be swept into the dustbin of history once the incumbent leaves office. Then history, as usual, shall return to business as usual.

Yet, during its “unipolar moment,” when the United States wielded its strongest hand to solidify its order, Washington waged disastrous wars in the Middle East, exported a financial crisis to the world, and allowed the principal beneficiary of its order, China, to be the largest communist country in the world. Why should India provide a lifeline to the liberal order when America squandered its prime opportunity to sustain it? New Delhi will not save Washington from its unipolar sins.

Alyssa Ayres lamented in 2017 that despite having the world’s third-largest military by personnel strength, fifth-largest defense budget, and seventh-largest economy (fifth-largest today, and third-largest by purchasing power parity terms), India is not a permanent member of the UN Security Council or a member of the G-7. But courting India as a swing state in order to prevent China’s authoritarian hegemony in favor of a regional balance of power will matter to a far greater degree in geopolitical terms than any integration into the institutions of a defunct liberal order ever would.

Renewed emphasis—most notably in the 2017 National Security Strategy and 2018 National Defense Strategy—on the hardware of great-power relations as opposed to the software of the liberal order has resulted in a new Cold War becoming the favored analogy for U.S.-China relations. American policymakers have not seen a peer competitor as powerful and large as China since the Soviet Union. But casual comparisons between the Cold War and contemporary U.S.-China relations are often bandied about without a solid historical basis. As Odd Arne Westad observes, “[c]ontemporary politics is full of false analogies, and the return of the Cold War seems to be one of them.”

The analogy’s premise on bipolarity is one reason for its falsehood. When President Richard Nixon and then-National Security Adviser Kissinger confronted the Cold War landscape of the 1970s, they premised American strategy on what Kissinger termed “triangular diplomacy” between the United States, Soviet Union, and China. Seeking to exploit the growing Sino-Soviet split and alter the global balance of power in America’s favor, they launched the American opening to China in 1971, bringing Beijing closer to Washington than it was to Moscow.

In 2020, the Cold War analogy may hold ground in the sense that America faces an emerging strategic triangle not entirely dissimilar from the old one of the 1970s, with China assuming the Soviet Union’s role as challenger and India replacing China as swing state. Two proud civilization-states that emerged from centuries of Western imperialism to declare their political independence in the late 1940s, China in the 1970s and India today, were and are led by vehemently nationalist, populist leaders avoiding even the perception of being controlled by foreign powers. Seeking to preserve their strategic autonomy and attain greater say and sway in their neighborhoods, China during the Cold War fretted over Soviet supremacy, fighting a border conflict with Moscow, and India sent troops to skirmish with Chinese troops over their border dispute at Doklam just three years ago. Searching for a strategy to counter Soviet hegemony, the Chinese under Mao welcomed an opening of relations with the United States. For India, as worries over China’s rise increase, it will naturally entertain a growing partnership with America.

Sure, the bipolar contest between Washington and Moscow featured just about none of the globalized exchanges of people, goods, and capital that define the U.S.-China relationship today. Meanwhile, modern India, as a winner of globalization, does not resemble the isolated, Cultural Revolution-ridden China of the 1970s. Yet both erected great barriers to economic and diplomatic integration, operating according to the conditions of a rising swing state confronted by an aggressive neighbor. And just as Cold War-era China did not subscribe to the liberal order, India never did either as a founder of the Non-Aligned Movement and de facto Soviet partner, and should not be expected to do so now. Trump’s populist in arms Modi will make sure of that, anyway.

Despite referring to his visit to Beijing in February 1972 as “the week that changed the world,” in 1994—not long before his death—Nixon told his former speechwriter turned journalist William Safire, “[w]e may have created a Frankenstein.” It is unclear when Nixon first had doubts about the opening to China, but as early as 1978, Nixon presciently wrote in his memoir, “[w]e must cultivate China during the next few decades while it is still learning to develop its national strength and potential. Otherwise, we will one day be confronted with the most formidable enemy that has ever existed in the history of the world.”

The central question for the statesman navigating today’s strategic triangle is whether the legacy of his or her grand strategy shall be the creation of a friend or a foe. For if China has become a “strategic competitor” by way of the liberal order, might a new order reveal a strategic partner in waiting? One that simply needs the support of a superpower willing to once again cultivate a poor country’s “national strength and potential?” Could Trump remark upon his deathbed that he contributed to the creation of a hero rather than a monster? Enter India.

Despite all of Washington’s platitudes about the world’s oldest and largest democracies uniting in common cause to uphold a free and open Indo-Pacific region, rhetoric has failed to match reality. Pinning American hopes on India saving an outdated order is wishful thinking at its worst. By spearheading a new Kissingerian triangular diplomacy based on the courting of New Delhi and the countering of Beijing, Washington has a realistic opportunity to balance the most consequential region of this era.