A Tribute To Brent Scowcroft 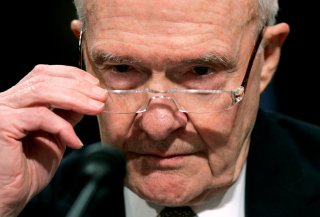 Editor's note: Brent Scowcroft, who has died at age ninety-five, was one of America’s leading statesmen. He served as national security adviser to both President Gerald Ford and George H.W. Bush. He was a public servant of the highest distinction who not only helped guide America to victory to during the first Gulf War but also presciently warned of the perils of toppling Saddam Hussein from power in an August 2002 op-ed in the Wall Street Journal called “Don’t Attack Saddam.” A firm exponent of foreign policy realism, he was a board member of the Center for the National Interest from 1994-2018. During discussions led by former president Richard M. Nixon at his home in New Jersey that were attended by AIG Chairman and CEO Maurice R. Greenberg, former Secretary of State Henry Kissinger, the former legislator and diplomat Robert Ellsworth, and Archer Daniels Midland CEO Dwayne Andreas, Scowcroft played an important role in helping to establish the Nixon Center for Peace and Freedom, which was from its inception programmatically independent of the Nixon Library. (It was renamed The Nixon Center in 1998 and the Center for the National Interest in 2011.) Scowcroft went on to play a central role in center programs and was a stalwart champion of its activities. We mourn his death. Below we reprint a tribute to Scowcroft’s visionary leadership by National Interest editor Jacob Heilbrunn.

IN 1961, Richard Rovere, a correspondent for the New Yorker, wrote an essay in the American Scholar called “Notes on the Establishment In America.” In it he described, with extensive footnotes, a northeastern mandarin class, composed of everyone from John McCloy to John Kenneth Galbraith, that was manipulating the levers of power at the highest levels of government and industry. Rovere wrote:

The Establishment, as I see it, is not at any level a membership organization, and in the lower reaches it is not organized at all. In the upper reaches, some divisions have achieved a high degree of organization and centralization and, consequently, of exclusiveness and power. The directors of the Council on Foreign Relations, for example, make up a sort of Presidium for that part of the Establishment that seeks to control our destiny as a nation.

Rovere’s spoof occasioned a good deal of comment—one credulous legislator and member of the John Birch Society even entered it into the Congressional Record as a profound indictment of the establishment’s reach and sway—but perhaps no riposte was more telling than William F. Buckley Jr.’s. It appeared in Harper’s Magazine in 1962 and was titled “The Genteel Nightmare of Richard Rovere.”

Buckley, who had devoted much of his early career to attacking the Eisenhower administration and mainstream liberals alike, pounced upon Rovere’s study. He said that for all his mock sobriety, Rovere was likely revealing more than he had intended. “The fact of the matter,” wrote Buckley, “is that Mr. Rovere’s disavowals notwithstanding, there is a thing which, properly understood, might well be called an American Establishment; and the success of Mr. Rovere’s essay wholly depends on a sort of nervous apprehension of the correctness of the essential insight.”

Indeed it did. For much of its history, the establishment has operated quietly in the corridors of power. The very idea of an establishment, after all, can seem antithetical to American democracy, a sentiment that was vividly expressed in Senator Joseph McCarthy’s description of Secretary of State Dean Acheson as “this pompous diplomat in striped pants, with a phony British accent.” The Vietnam War further discredited the establishment in the eyes of the Left and the Right, the former blaming it for being too hawkish and the latter for not being hawkish enough. As the militant rollback doctrines championed by Buckley and his crowd, which had been expressed but never acted upon by the Reagan administration, were put into operation by the neoconservatives during the George W. Bush administration’s war in Iraq, the establishment seemed as passé among Republicans as among Democrats.

More recently, however, the establishment has seen its reputation rise steadily. An entire field of what might be called establishment studies has appeared to depict leading foreign-policy figures from the Cold War, some of whose surviving members (most notably George F. Kennan, who died at the age of 101 in 2005) warned against both NATO expansion and the Iraq War. The volumes include Walter Isaacson and Evan Thomas’s The Wise Men, Kai Bird’s The Chairman, Geoffrey Kabaservice’s The Guardians, Godfrey Hodgson’s The Colonel and John Lewis Gaddis’s George F. Kennan: An American Life. The reason for this steady output about patricians such as Kennan, Acheson, Henry Stimson and Robert Lovett isn’t simply a case of nostalgia for a bygone era, though there is certainly some of that. It’s because these grandees represent a foreign-policy tradition that retains its relevance—a conception of public service that, as far as possible, seeks to define and defend America’s national interests rather than focus on partisan gain.

ENTER BRENT Scowcroft. In his new biography The Strategist: Brent Scowcroft and the Call of National Security, Bartholomew Sparrow, a professor of government at the University of Texas at Austin, offers a timely reminder of his significance. Few former government officials epitomize the belief in public service better than Scowcroft. As a retired U.S. Air Force lieutenant general, a former military assistant to Richard Nixon, and U.S. national-security adviser under Presidents Gerald Ford and George H. W. Bush, Scowcroft has become Washington’s quintessential wise man.

Over the past five decades, beginning with his service to Nixon and continuing to the present, Scowcroft has played a central role in promoting an internationalist foreign policy grounded in realist precepts. He stands for the antithesis of a crusading doctrine that goes abroad in search of monsters to destroy. The bluster and braggadocio that characterize many of his detractors are alien to Scowcroft. So as a welter of Republican candidates prepare to seek their party’s nomination for the presidency, they would do well to contemplate his legacy. Here are five lessons Scowcroft’s career offers.

The first lesson is a reminder of the importance of character. Born in Ogden, Utah, in 1925 into a Mormon family, Scowcroft has never lost sight of the bedrock values that his parents instilled in him—tenacity, diligence and self-effacement. This translates into his approach to international relations. He does not think that Washington can successfully hector or even bully other nations into following its lead. Instead, Sparrow notes, “Although he has not stated so explicitly, Scowcroft believes in an indirect pursuit of human rights—human rights as the by-product of public policy and international diplomacy.” The most that the United States can do is to engage in quiet diplomacy in order to persuade other governments to respect human dignity. His views seem quite reminiscent of Kennan’s: wary of Congress, skeptical of the media and wary of the abrupt mood swings of public opinion. Like Kennan, he is sympathetic to a national-security policy guided by an elite—“a hierarchical approach to leadership,” Sparrow astutely notes, “that is characteristic of several of the institutions which Scowcroft has been a part of, such as the Air Force, the Department of Defense, the presidency, and the Mormon Church.”

The second lesson is about what actually constitutes realism. A problem that realists sometimes run into is that they aren’t all that realistic. Not Scowcroft. He considers himself to be an “enlightened realist,” which is to say that he takes account of practical circumstances as opposed to seeking to force events into a procrustean framework. In short, unlike a number of classical realists, who take a rather simplistic view of international relations by reducing countries to a set of billiard balls that supposedly react predictably to one another, Scowcroft takes a more sophisticated approach. As an Air Force intelligence staff officer who served in Yugoslavia in the mid-1950s, Scowcroft worked under Kennan, who was ambassador to the independent Communist state. Scowcroft, who studied Russian history and Communism, came to the sensible conclusion, not all that different from Kennan’s, that Soviet ideology was more an outgrowth of Russian nationalism and geopolitical insecurity than an expression of an unquenchable drive for world domination. Nor was there anything inherent “in the Slavic soul,” he said, that stipulated that the Soviet Union expand abroad.

Sparrow observes that Scowcroft acts upon the conviction that

in the United States’ pursuit of many of its goals, whether the provision of a well-functioning international economy, the prevention of terrorism, the control of pandemics, or the protection of the environment, policy makers can be far more effective by seeking collective solutions, negotiated with other countries, rather than by acting on their own.

This may seem fairly obvious, but then again, it’s not a prescription that Washington has consistently followed.

THE THIRD, and related, lesson is to avoid triumphalism in foreign policy and emphasize diplomacy. As national-security adviser to George H. W. Bush, Scowcroft played a central role in crafting America’s response to the collapse of the Soviet Union. He had no sentimental attraction to Mikhail Gorbachev, though as Gorbachev’s grip on office began to slip, the Bush administration became increasingly worried about the prospect of an abrupt and chaotic Soviet collapse. Overall, upon entering office, Bush was much more cautious in dealing with the Kremlin than the Reagan administration had been during its final years, when it signed sweeping arms-control treaties with the Soviets.