A Tribute to Peter G. Peterson 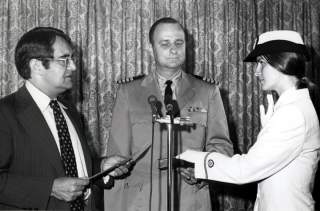 Peter G. Peterson, who died on Tuesday at the age of 91, was a Wall Street titan who devoted his life to public service. A self-described Rockefeller Republican and a pragmatic and sober thinker, he served in the Nixon administration as Commerce Secretary. He went on to found the Concord Coalition in 1992, a bipartisan organization that warned of the corrosive effects that the national debt poses for America’s future. He was chairman of the Council on Foreign Relations from 1985-2007 and founding chairman of the Peterson Institute for International Economics. We are proud to note that he was also a founding board member of the Center for the National Interest and that he played an indispensable role in helping to guide it for several decades, offering sage counsel and generous financial support as well as participating in many events. We mourn his passing.

Peterson, who was the son of Greek immigrants, personified the American dream. He ascended from modest beginnings in the small town of Kearney, Nebraska to become one of the world’s most respected investors and political counselors. As a boy he worked in his father’s local diner and learned the importance of frugality and discipline. He went on to study under the legendary free market scholar and Nobel Prize winner Milton Friedman at the University of Chicago, where he earned a graduate degree at the business school in 1951. Upon graduation, his keen intelligence ensured that he rose rapidly in the business world. By 1963 he was CEO of Bell & Howell.

But Peterson was also attracted to government service and in 1971 he joined the Nixon administration as assistant to the president for international economic affairs. In 1972 he became Commerce Secretary. It was a turbulent moment. The United States continued to fight in Vietnam. The economy would be hit by oil shocks. Eventually, Nixon would institute wage and price controls. Peterson participated in a pivotal meeting at Camp David in August 1971 at which Nixon correctly decided to remove the United States from the gold standard. According to Bloomberg, Peterson’s influence on the president was significant: “By the time Peterson released a study of world trade and monetary issues, he was known as the `economic Kissinger,’ a flattering comparison to the influence of Nixon’s national security adviser, Henry Kissinger.”

After leaving the Nixon administration, Peterson joined Lehman Brothers, which he worked tirelessly to rejuvenate. In 1985, Peterson, together with Stephen A. Schwarzman, embarked upon his most ambitious venture yet in establishing the Blackstone group, which became the world’s most successful private equity firm. For many years, Peterson served as its chairman.

But it was America’s role in the world—and its fiscal health—that were always of paramount concern to him. He became a vocal and influential advocate for reforming Social Security. In a two-part series, for example, in 1983 in the New York Review of Books he both diagnosed its financial problems and proposed remedies that provoked much debate. In 1991, Peterson published a book called Gray Dawn in which he carefully examined demographic trends and their implications for the world’s fiscal health. He warned, “The challenge of global aging, like a massive iceberg, looms ahead in the future of the largest and most affluent economies of the world.” In 2004, after George W. Bush compiled massive new deficits, Peterson said, “"I remain a Republican, but the Republicans have become a far more theological, faith-directed party, not troubling with evidence." In 2009, he published a memoir called The Education of an American Dreamer: How a Son of Greek Immigrants Learned His Way from a Nebraska Diner to Washington, Wall Street, and Beyond and, in 2010, he signed “The Giving Pledge,” vowing to donate at last half of his fortune to charity.

At a moment when the very increases in tax cuts and military spending that Peterson warned about are now resulting in a national debt that has reached a historic $21 trillion, his insights and example are more urgent then ever. A true American patriot, Peterson not only made an invaluable and enduring contribution to public debate and policy, but also represented everything that was best about his beloved country.