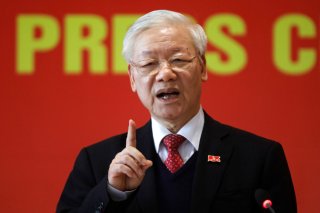 The visit by Vietnam’s Communist Party chief Nguyen Phu Trong to China deserves scrutiny—not just because the trip could affect Vietnam’s relations with China and the United States, but because the war in Ukraine is being watched cautiously in Hanoi. The primary lesson Vietnam’s leaders have learned from the war is that a weaker state should learn how to embrace an acute sense of asymmetry with a stronger power next door. In 1979, China and Vietnam entered a brief border war, which, in the words of Deng Xiaoping, China’s pre-eminent leader at that time, was conducted to “teach Vietnam a lesson.” The conflict occurred because China was enraged at Vietnam’s attempts to seek autonomy in interactions with Beijing while forging close ties with the Soviet Union.

Even though Trong’s official trip to Beijing seems to be more form than substance, with both sides vowing to join hands to increase bilateral trade turnover, maintain supply chain stability, make good use of free trade agreements, and strengthen connectivity for strategic development, it still has important implications. By paying deference to China, especially at a time when Xi Jinping has become powerful and seemingly unchallenged after securing a historic third term as the Chinese Communist Party’s leader, Trong seems to have acknowledged Xi that Vietnam will continue to value the traditional relationship of “camaraderie and brotherhood“—wording used by Xi in May last year. In the words of Trong, his visit aimed to elevate Vietnam’s comprehensive strategic partnership with China “to a new height“ that is “stable, healthy, and sustainable.”

At the 19th Shangri-La Dialogue that took place in June of this year, Vietnamese defense minister Gen. Phan Van Giang underscored that peace is the legitimate wish of all nations in the region, adding that “Vietnam was ravished by decades of war to defend our nation, [and] we fully understand the devastating consequences of conflict and violence.” Giang’s remark, though implicitly, was geared towards Vietnam’s understanding of Russia’s war in Ukraine and its bitter lessons. In responding to an onsite question about the stature of China in Vietnam’s foreign relations, Giang—instead of giving a clear and sharp answer—used a famous Vietnamese proverb: “Sell your faraway brothers, buy your nearby neighbors.” In Vietnamese, this figurative (and abstract) saying could be understood as saying that a nearby neighbor is more helpful compared to a faraway relative. In other words, your neighborhood friends should be appreciated more than those miles away, as those closer to you would assist you better in times of trouble. This notion holds true for the Sino-Vietnamese relationship.

Maintaining a stable relationship with China, particularly at a time when the ongoing war in Kyiv has caused political reverberations in middle and small states, is a litmus test for Vietnamese leaders. As Trong has sought to assure domestic stability, which has been widely known via his long-embraced campaign to curb bribery and crony capitalism, he needs to consolidate the legitimacy of the Vietnamese Communist Party (VCP) while maintaining the momentum of his crackdown on corruption, widely known as the “blazing furnace“ campaign. A face-to-face meeting with Xi could help Trong better garner Beijing’s support, such as effective tactics to address corruption while tightening the VCP’s grip on power leadership. Both sides could likely discuss ways to enhance ties between the two parties, such as establishing new channels to foster dialogue and strategies to bolster economic growth. Trong could also take this opportunity to assure Xi that Vietnam will continue to adhere to its “Four No’s“ policy—namely, no joining military alliances, no taking sides with one country to act against another, no foreign military bases in Vietnam’s soil, and no using force or threatening to use force in international relations.

The trip also has nuanced implications for Vietnam’s future engagement with Washington and Beijing. As U.S. president Joe Biden might consider visiting Vietnam in November when attending multilateral summits in Southeast Asia, Trong’s visit to China before Biden’s possible trip signifies that Hanoi views the Sino-Vietnamese relationship as the top priority of its foreign relations. To Vietnam, China is framed as a neighbor, a comrade, and a regional power, while the United States is but one of Vietnam’s growing partners. The United States could be seen as a friend to Vietnam, but China is a neighbor sharing a common destiny “through every twist and turn of its history.”

Though Washington and Hanoi have achieved remarkable progress, ranging from trade and investment linkages, defense trade, people-to-people ties, and maritime security, the current “comprehensive partnership” has yet to be elevated to a “strategic partnership.” U.S. equivocal (and sometimes inconsistent) policy and rhetoric towards Southeast Asia has been lingering, leading to Hanoi’s skepticism about America’s commitment to bolstering ties with Vietnam. Washington’s Indo-Pacific Strategy hailed Vietnam as one of the United States’ “leading regional partners.” However, the Biden administration’s National Security Strategy did not include Vietnam, thus raising doubts about whether U.S. interests and priorities are aligned with those of Vietnam.

While forging ties with the United States on multiple fronts, including in the fields of maritime domain awareness and war legacy issues, Vietnam will likely not be willing to elevate the relationship with the United States to the level of strategic partnership, particularly when Trong is still in power. It should be noted that Trong, perhaps the most powerful Vietnamese leader after Vietnam’s Renovation (known as Doi Moi) in 1986, has been famous for his calm posture and quiet personality but has discernible weight when it comes to Vietnam’s diplomacy. With his ideological ties with leaders in Beijing, Trong would remain cautious of liberal and democratic values and is unlikely to support an elevation of partnership with the United States.

Vietnam’s room to maneuver remains ample. To navigate great power politics, Vietnam’s leaders could assure Washington that the Vietnamese leader’s visit to China is nothing more than a symbolic tour, and that such a visit is “conventional”—aiming to bolster the fitness of a party-to-party relationship between the two Communist countries. For Vietnam’s leaders, conveying such political wording is not a tricky task. However, it remains to be seen whether the United States could remain patient and sympathetic to Hanoi’s conundrum of maintaining a delicate balance between the two superpowers.

Trong’s timely visit to congratulate Xi on his third term as general secretary of the Chinese Communist Party and recent improvements in Vietnam’s ties with both the United States and China have indicated that the Vietnamese boss has learned how to respect the mature asymmetry between Hanoi and Beijing while seeking to enhance ties with Washington.

The pressure, however, to take sides has been simmering, especially when China and Russia have stepped up efforts to force Vietnam to lean towards their sides. Leaders from Russia and China, when having dialogues with Vietnam’s leaders via online and in-person meetings, have repeatedly criticized the United States for seeking hegemony and attempting to isolate their maneuvering space, thus complicating Vietnam’s neutrality and autonomy. For a “swing state” like Vietnam, the war in Ukraine and deteriorating ties in Washington’s relations with Beijing and Moscow continue to harbor systematic challenges over Vietnam’s “bamboo diplomacy”—known as its statecraft in “balancing competing geopolitical interests” with “flexibility and pragmatism.” To what extent Vietnam could maintain autonomy in its foreign policy thus remains to be seen.

Huynh Tam Sang is a lecturer of the Faculty of International Relations at Ho Chi Minh City University of Social Sciences and Humanities, a research fellow at the Taiwan NextGen Foundation and a nonresident WSD-Handa Fellow at the Pacific Forum. He tweets at @huynhtamsang2.