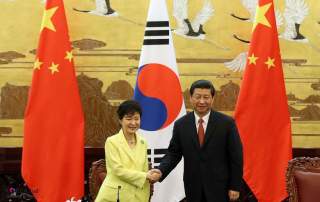 The Christmas release of The Interview, however coarse in depiction, underscores the Korean peninsula’s tremendous geostrategic importance and potential for disruptive change. Brookings scholar Jonathan Pollack aptly terms it “the East Asian pivot.” Historically, it has been an important battleground—the latest major instance being the still-unresolved Korean War (1950-53). The current status quo is unsustainable, the future uncertain but surely dynamic. It therefore matters greatly that significant resource-rich peninsular land and proximate seas have attracted intense debate and contestation. These differences, primarily between China and South Korea today, are likely to involve other parties such as North Korea or a successor state and Russia in the future. Pointed disagreements, deeply intertwined with painful, contested history, will likely resurface as peninsular conditions shift and Chinese and Korean capabilities, particularly maritime, grow. Considering the historical basis and subsequent evolution of continental, maritime, and riverine disputes among China and the Koreas, and how all sides have thus far attempted to mitigate discord, offers insights into future developments in a vital but vulnerable region.

China and the two Koreas enjoy some areas of convergence and cooperation. In the early 1960s, China compromised with North Korea over their disputed land border and riverine islands and shoals to counter Soviet pressure. More recently, China and South Korea have attempted to resolve overlapping exclusive economic zone (EEZ) and fisheries claims, and reduce illegal fishing. China and North Korea have developed trans-border infrastructure, and share electricity from the Yalu River’s Sup’ung Dam. All three nations, with Russia, are attempting to develop the border region’s economy.

Nevertheless, even these modest measures remain restricted by a troubled past. The Koguryo/Gaogeli kingdom’s history and border demarcation resulting from Japan’s annexation of Korea leaves many Koreans dissatisfied. Beyond arguing that Koguryo was an independent Korean kingdom, not part of the Chinese empire—which has broad symbolic resonance among the Korean public—some Korean nationalists and scholars question the very basis for the 1909 Gando Convention, under which Japan demarcated Korea’s border with China. Additionally, some Korean nationalists maintain that the territory now known as the Yanbian Korean Autonomous Prefecture in China’s Jilin Province belonged to the Korean kingdom of Chosŏn since 1392, and was transferred to China at a time when Korea was repressed.

Certainly, only small numbers of Korean activists and scholars argue that territory currently administered by China should return to Korean jurisdiction. In the case of symbolically redolent Mt. Paektu/Changbaishan, for instance, it not the mountain itself that is contested, but the border around it. Because Beijing and Pyongyang split jurisdiction over the mountain itself in 1962, with part now under Korean administration, few Koreans holds grievances against China for “taking Paektu.”

While the Yalu and Tumen rivers influenced the larger boundary demarcations between China and North Korea, they are also some of the peninsula’s few navigable waterways, containing strategic islands. The Tumen, landlocked northeast China’s only potential waterborne access to the East Sea/Sea of Japan, is literally obstructed by history and neighbors’ rights. Here China was originally forced to compromise under pressure from imperial Russian expansion, beginning with the 1858 Treaty of Aigun, which effectively transferred over one million km2 of territory. While China retains rights to navigate the waterway, the value of direct autonomous access will only grow as Arctic ice melt increasingly opens a summer Northeast Passage offering a more direct Asia-Europe route. North Korea and Russia rarely adopt cooperative attitudes on this issue. Living within present realities, China currently pursues access to the Tumen’s northeastern outlet through DPRK ports. Given Chinese historical grievances against Russia, China’s rising maritime capabilities, North Korean sovereignty concerns, and Russian determination to deny China strategic advantage in the Pacific, Tumen access issues could generate tensions.

At sea, China has disputes with both Koreas, principally regarding EEZ demarcation. These are important given the zones’ rich fisheries and likely significant hydrocarbon deposits—the latter being particularly valuable given Chinese and Korean oil import reliance. Fishing tensions arise periodically, most dramatically in 2011 with the killing of a South Korean Coast Guardsman by an illegal Chinese fisherman. Currently, Pyongyang is far quieter than Seoul, but disagreements regarding the Yellow Sea could mount if there were no longer a North Korean regime beholden to China. Moreover, a unified Korea, freed from maintaining opposing armies along the 38th parallel, might pursue greater capabilities to uphold maritime claims. Beijing and Seoul also dispute jurisdiction over waters surrounding the submerged Ieodo/Suyan rock, which is now included in the air defense identification zones (ADIZ) of three states: Japan since 1969, China since November 2013, and South Korea as of December 2013.

Before examining the divergent perspectives and unique dynamics with which each state approaches these disputes, it is useful to review them. Disputes may be divided into three categories: continental, maritime and riverine.

Continental disputes between China and the Koreas include the Koguryo/Gaogeli history dispute and the border dispute surrounding Mt. Paektu/Changbai. In 2002, the Chinese Academy of Social Sciences (CASS), in cooperation with a consortium representing China’s three northeastern provinces, launched a government-funded study, Northeast Borderland History and Current Situation Series Research Project, to analyze border region history. Two years later, in April 2004, the Chinese Foreign Ministry’s official website deleted Koguryo/Gaogeli from its coverage of Korean history. In March, Seoul launched its own Koguryo Research Foundation (renamed Northeast Asian History Foundation/NAHF in 2006). In September, the government in Seoul declared that it no longer viewed the 1909 Gando Convention (in which Japan negotiated the current Manchuria border) as valid. By January, however, Seoul was already diffusing tension. Park Heung-Shin, the ROK’s Director General of Cultural Affairs, acknowledged the controversy as an “academic endeavor” that should not “be put on a par with government initiatives.” In 2007, the Chinese official position on Koguryo/Gaogeli, according to Premier Wen Jiabao, was “separating research from politics and reality from history.”

The border dispute around Mt. Paektu/Changbai likewise has historical roots. Rich in coal, timber, and ginseng, the mountain remains contentious because both Manchus and Koreans view it as sacred. Symbolic value stems from Korean legend that the ancient god Hwanung impregnated a woman at the site who conceived Tan’gun, the first Korean state’s mythical founder (2,333 BC). Located in the Manchu homeland, the mountain is also the mythical birthplace of legendary Machu state founder Bukuri Yongson. This connection is important because Manchus today constitute China’s third largest minority (10.4 million). Further complicating matters, North Korea founder Kim Il-sung and filial successor Kim Jong-Il both falsely claimed birth on the mountain (Kim Jong-Il was actually born in the Russian military camp, Vyatsk, in 1942 while his father served in the Red Army there). The mountain retains significance for the Kims in part because Kim Il-sung allegedly rallied rebels there during 1930s Korean Revolution.

In 1961 both North Korea and China claimed the mountain in official publications. Beijing demanded Pyongyang forfeit 160 km2 surrounding the peak. In 1962, the two states reached a bilateral agreement; however, in 1968-69 local skirmishes occurred. By 1970, China ceased to pursue its claim aggressively.

NAHF states: “Agreements between Qing China and Japan in 1909 excluded Korea, which should have been a participant because this issue treated the border between Korea and Qing China.” NAHF declared the Gando Agreement “null and void” because it was conducted under the 1905 Protectorate Treaty, disallowing Chosŏn from being an active member in negotiations Tokyo executed. Similarly, Beijing today regards the 1945 Potsdam Declaration as having invalidated the Treaty of Shimonoseki/Maguan and any other “unequal treaty” under which Japan pressured China into relinquishing territory. Neither treaty resolved sovereignty of the area surrounding Paektu/Changbai Mountain. According to NAHF, during this period “Mt. Paektu… itself was not brought into the dispute.”

Maritime disputes between China and the Koreas run both broad and deep. General disputes involve EEZ demarcation. According to the UN Convention on the Law of the Sea, states can claim 200 nm of exclusive economic zone from their territorial waters’ baselines. Distances between Chinese and Korean shorelines for the Yellow and East China Sea are beneath 400 nm at all points. Neither China nor either of the Koreas has taken any maritime dispute with the other to the International Court of Justice or its post-1994 successor, the International Tribunal for the Law of the Sea. This is probably in part due to Beijing’s rejection of “third party intervention” in favor of “negotiation and consultation.”

More specifically, China and South Korea dispute the water surrounding the submerged rock Ieodo/Suyan. In 1987, South Korea affixed a warning beacon and in 1989 built an observation facility to measure ocean currents and accumulate environmental data. In 1996 Ieodo became a point of contention between Beijing and Seoul because the international community extended EEZs to 200 nm at this time. Ieodo’s location, formerly in international waters, became a part of a zone claimable by both China and South Korea. South Korea, undeterred, built the unmanned Ieodo Ocean Research Station on the rock in 2003.