The True Cost of Punishing Iran With Snapback Sanctions 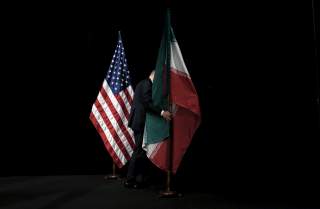 According to official figures, U.S. government drone strikes killed 2,436 people in 473 counterterrorism strikes in Pakistan, Yemen, Somalia, and Libya under the Obama administration, representing an exponential increase from the prior eight years. Experts have called the Obama administration’s intensive and unrelenting use of drones as a key feature of his foreign-policy legacy. Drone strikes represented an effective means of targeting terrorists and were broadly popular among Americans as they carried little cost in money, American lives and geopolitical consequences.

But the tool that will be a legacy forming feature of American foreign policy during the Trump era is likely to be the administration’s prolific and cavalier use of sanctions. Sanctions are an “extremely seductive tool” for the Trump administration for much of the same reasons the Obama administration appreciated drone strikes. Sanctions offer the U.S. government an efficient and impactful policy weapon that is deployable from a safe distance and often perceived as an inexpensive option.

Critics have watched wearily as the Trump administration has drastically escalated the use of sanctions to unprecedented levels. In the first year of the administration alone, the U.S. government blacklisted one thousand people and entities, representing a 30 percent spike from Obama’s last year in office and a threefold increase from his first year as president. Experts, including former Secretary of Treasury Jack Lew, have warned that the unilateral and excessive use of sanctions risks diminishing the effectiveness over time. But the reintroduction of sanctions against Iran has prompted warnings, including from former U.S. government sanctions architects, that the United States may inadvertently rally many in favor of blunting U.S. sanctions as a tool of statecraft by challenging the power this policy tool rests upon—the centrality of American markets and the dollar in global trade.

So far, Europe has taken a number of steps including invoking blocking regulations to protect European firms and many European states have moved to facilitate trade with Iran through state credit institutions. During the UN General Assembly, those states together with Iran, introduced a new Special Purpose Vehicle (SPV) to undermine America’s ability to cut Iran off from the global banking system. European efforts have so far been scattered, ad hoc and disjointed, but the introduction of SPV indicates that they are becoming more cohesive and assertive. European officials have also indicated that the SPV can be used for other purposes, indicating that they are looking to undermine America’s ability to wage financial warfare on a more structural basis, beyond the Iran issue. China and Russia will surely empower these efforts to protect themselves.

There are many ways in which the Trump administration’s approach to sanctions varies from that of its predecessors, but a few of them stand out as especially corrosive to the future of U.S. coercive economic statecraft.

First, the Trump administration’s pursuit of sanctions against Iran is inherently and aggressively unilateral. The consultative process of garnering international cooperation and overlapping sanctions legislation from around the world, buttressed by the UN Security Council, has been abandoned in favor of harsh edicts from Washington over the objections of its own economic partners.

Many countries resent the fact that Washington is essentially leveraging their economic presence through extraterritorial, “secondary” sanctions as part of a campaign against the Iranian government, which they have judged as an anathema to their security interests. European officials have repeatedly called this a violation of their sovereignty. As Obama era sanctions official Richard Nephew explained in a recent essay, “[o]ther countries often bristle at secondary sanctions, viewing them as a particularly brazen example of American unilateralism and an illegal, extraterritorial application of U.S. law.”

Second, the sanctions are being reimposed at a speed that is distressing to allies and markets. Iran oil sanctions have already caused a severe increase in petroleum prices even before they formally take effect in November. In his book, The Art of the Sanction, Nephew explains that the gradual buildup of sanctions is critical to its effectiveness in generating behavior modification in the sanctioned state. The Trump administration’s snapback approach, coupled with the aggressive negotiation position, bolster the notion that its ultimate aim is regime change rather than negotiations. But the rapidity of sanctions reintroduction also harms the ability of U.S. economic allies to protect themselves against their consequences.

Having to halt almost all business ties with Iran will affect some U.S. allies more than others. Iraq, still reeling from the war against ISIS, is seeking waivers to protect its critical economic ties with a key neighboring trading partners. Experts have long warned that damaging Iran–Afghanistan economic ties could have disruptive consequences for an Afghanistan already facing an “existential moment.” The UK is facing an uncontrolled rise in inflation attributed to Iran sanctions based-commodity inflation ahead of a possibly disorganized tearing away from Europe’s one market. In India, experts warn that an absence of oil supplies, caused by the sanctions, could present a “critical challenge” for Narendra Modi’s re-election chances.

The recent economic measures against Turkey over the Pastor Andrew Brunson saga also set two unnerving historic precedents for America’s closest allies. The first is that even America’s treaty allies are no longer immune to being the targets of America’s economic wrath. The second is that the threshold for the deployment of these weapons has been practically lowered to the floor. These types of coercive means have long been used to address nonproliferation concerns, major geostrategic objectives, serious security threats against the international community or grave humanitarian catastrophes. Brunson’s family is no doubt happy to have him home, but a dispute over the detention of one person does not constitute a matter of international concern.

None of this is to say U.S. sanctions and economic measures will become fruitless anytime soon. Their ability to achieve larger policy goals, such as behavior modification or regime change in Iran, is highly suspect, but there is little doubt that Iran’s economy will suffer. Many analysts even referred to the flagship European countermeasure—the SPV—as merely a “gesture.” But if it fails to bring any meaningful benefit to Iran’s economy, it likely won’t affect Iran’s strategic thinking. Europe will then be faced with a choice: go further in exploring the extent to which Washington can be thwarted or potentially face the far-reaching consequences of the nuclear deal’s total collapse. In the long term, the collective angst of America’s allies over the imprudence of U.S. decisionmaking will encourage them to take actions large and small to gradually degrade America’s capacity to wield its economy against others. Unchallenged American economic leadership in the world and the hegemony of the dollar will be the collateral damage.

Alireza Ahmadi is a researcher and analyst focused on U.S. foreign policy towards the Middle East. He has been published by The Hill and Al-Monitor about U.S.–Iran–Saudi Arabia issues. You can follow him on Twitter at @AliAhmadi_Iran.