The True Danger to America's Democracy 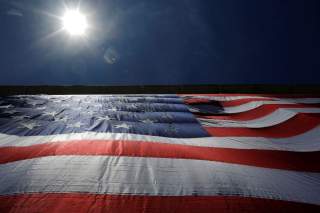 John Adams predicted that July 2 would become a celebrated American holiday. Sensing the coming of a momentous vote on the Declaration of Independence, Adams wrote to his wife Abigail that “The Second Day of July 1776, will be the most memorable Epocha, in the History of America.” He believed that the date “ought to be solemnized with Pomp and Parade, with Shews, Games, Sports, Guns, Bells, Bonfires and Illuminations from one End of this Continent to the other from this Time forward forever more.” Adams got the date wrong—the actual signing of the Declaration took place on July 4—but he got the spirit right. Independence Day has since been treated as a celebration of America’s independence from Great Britain.

For all of Adams’ enthusiasm, however, his letter obscures the fact that America’s founders were, for the most part, a tragically-minded group. Those “present at the creation” of the United States were certainly driven by the audacious belief, as Thomas Paine wrote, that they had the chance “to begin the world over again.” Yet throughout the early years of the American republic, they also drew motivation from the tragic histories of the republics of antiquity. For the founders, those histories showcased the difficulties of maintaining liberal, self-governing polities in a hostile world, and they suggested that a proper appreciation of tragedy was essential to avoid a premature end to the American experiment.

In particular, the Federalist essays—collectively, the single most cogent defense of the constitutional order designed in Philadelphia in 1787—were littered with cautionary references to the ancient world. For John Jay, James Madison, and Alexander Hamilton, the fall of Athens and other republics of old provided vivid illustrations of the need for small polities to join together in the face of external threat. States “seduced by a too great fondness for peace to decline hazarding their tranquility and present safety for the sake of neighbors” would pursue the illusion of individual safety over collective security, Jay wrote. In a world dominated by hostile autocracies, however, those states would be rewarded not with safety but with isolation, weakness and existential peril. Larger nations would prey on the weak and divided American states, coercing them with superior military power or corrupting them through subtler means.

Likewise, the Federalist drew on the history of the Greek city-states in warning that weak, nonbinding confederacies invariably invited despotism, aggression, and anarchy. Following the conclusion of the Persian War in 479 BC, Hamilton and Madison argued, the Greek confederacies might have improved the chances of building a strong liberal state had they used the peace to form a closer union. Instead, they “became first rivals and then enemies; and did each other infinitely more mischief than they had suffered” during the fighting. “Their mutual jealousies, fears, hatreds, and injuries” eventually brought on the great Peloponnesian War between Athens and Sparta, “which itself ended in the ruin and slavery of the Athenians” and their proto-democratic system. The lesson was that republics that failed to develop the necessary internal cohesion and vigor “never fail to bring on fresh calamities from abroad.” More dangerous still, loose associations of states invariably ran the risk of violent strife among their various members.

These warnings resonated with a generation of leaders that had been schooled in the classics—and that had seen, during the troubled period of the Articles of Confederation, how weakness and division could threaten the survival of republics modern as well as ancient. These unhappy precedents informed what was undoubtedly the most crucial feature of the constitutional republic that emerged in the late 1780s—the creation of a central government whose power remained carefully circumscribed, but was nonetheless strong enough to defend the country from external threats, and to facilitate the internal commerce, cooperation, and development that were essential if the nation was to grow stronger, more secure, and more united in succeeding generations.

“There are two ways of…acquiring improvement and instruction,” Abigail Adams had earlier written to her husband, John. “First by one’s own experience, and secondly by that of other men. It is much more wise and useful to improve by other men’s miscarriages than by our own.” For the founders, an awareness of downfalls past helped impel the construction of a political order that would ultimately carry America to a position of great influence and power. As the United States confronts a new period of domestic and foreign crisis today, their experience suggests three lessons.

First, internal division begets external aggression. The founders worried incessantly that political disunity at home would allow hostile foreign governments to exacerbate domestic cleavages, sow further strife, and ultimately undermine America’s sovereignty and democratic institutions. Over two centuries later, aggressive authoritarian powers—namely Russia and, to an increasing degree, China—are doing just that, using inflammatory or fake information, cyberattacks, and political and economic pressure tactics to exploit America’s domestic divisions and corrupt the free and open discourse on which the country’s democratic political system depends. It is surely too much to hope that America’s current president, Donald Trump, will lead any meaningful effort to improve domestic cohesion. But the founders’ warnings remind us that, in stoking rather than ameliorating internal divisions, Trump is leaving the country vulnerable to precisely the sort of authoritarian depredations the revolutionary generation feared.

Second, complacency is as deadly an enemy as any foreign foe. The tragic mindset of the founders led them to believe that republics were not the norm but the exception in history, and to understand that their unique political experiment faced severe challenges and hostility from powerful authoritarian states. Remaining alert, vigilant and capable was thus essential to survival.

Today, American power is unparalleled, and U.S. democratic institutions have long been consolidated. But a tragic mindset cautions against resting on these laurels. It reminds us that continued, strenuous efforts will be required if the peaceful, prosperous, and liberal international order the United States has played a leading role in forging is not to be eroded by intensifying ideological competition and geopolitical revisionism at work in the world today. It also reminds us that democratic institutions—abroad and at home—will only stay consolidated if Americans rally to their defense when they are threatened. Progress is inherently precarious, the founders understood from their study of history; Americans could stand to re-learn this historical lesson today.

Finally, a tragic mindset underscores the importance of working in concert with like-minded states. The union the founders created was a tenuous one, and it was unclear if thirteen independent-minded colonies could become a single sovereign state. Yet the founders knew, from the experience of the Articles period and their reading of ancient history, that small, weak states acting individually would prove incapable of defeating the threats to their safety. Only by pooling resources and responding collectively to external challenges could such states hope to defend themselves and become something greater than the sum of their parts.

The same thinking has traditionally underpinned America’s alliances in Europe and the Asia-Pacific region. Preventing great-power war and international aggression, promoting an open global economy that averts depression and privation, and upholding democracy and human rights on a global scale are goals that can only be achieved through strong partnerships and collective effort. And today, amid intensifying challenges from China, Russia, Iran, North Korea, and other actors, it is becoming clear that the remarkably successful international order America and its friends created will endure only if all the supporters of that order once again lock arms and commit fully to its defense. Carelessly endangering the cohesion of U.S. alliances through taunts, insults, and an “America First” worldview that depicts longtime friends as rivals in a zero-sum contest for wealth and power is thus a recipe for hastening the sort of tragedy the founders sought to avoid.

This Independence Day, it is worth remembering that the founders’ sense of tragedy was indispensable to building a nation that was flawed but nonetheless beautiful and enduring. Rediscovering an appreciation of tragedy is equally critical today, as both the internal and external challenges to America grow.

Hal Brands is Henry Kissinger Distinguished Professor of Global Affairs at the Johns Hopkins School of Advanced International Studies, Senior Fellow at the Center for Strategic and Budgetary Assessments, and a Bloomberg Opinion Columnist.

Charles Edel is Senior Fellow and Visiting Scholar at the United States Studies Centre at the University of Sydney and previously served on the U.S. Secretary of State's policy planning staff.

This article draws on their forthcoming book, The Return of Tragedy.

Image: As 95-by-50-foot American flag is unfurled on the side of an apartment complex, a replica of the "The Great Flag" that was spun, woven, dyed, constructed and displayed on the same building by Amoskeag Manufacturing Company in 1914, in Manchester, New Hampshire, U.S., June 14, 2017. REUTERS/Brian Snyder