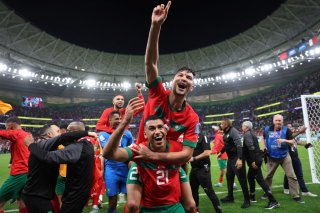 With its victory over Portugal on Saturday, Morocco’s team became the first African-Arab team to advance to the semi-finals of the World Cup. While it is possible to make too much of statistics on soccer, this victory has cultural and political implications for the United States and the world, which outsiders might not immediately see.

Part of it is the simple, human joy of victory. If you remember the relation and excitement of America’s victory over Iran at an earlier stage of the World Cup, multiply that by ten.

Morocco’s win also comes on the anniversary of another barrier-breaking moment. Fifty-two years ago, Morocco became the first African country to participate in a World Cup, which was previously the province of European and South American teams.

The Moroccan team has many players that were born and raised in the Netherlands, France, Belgium, and other European nations. They were the children of immigrants. Their parents obeyed the law, worked hard, and made a life in their new lands. Their children grew up learning the values of hard work, tolerance, and, in the school leagues, working alongside teammates with different faiths, and languages, both natives and newcomers. As adults, these athletes acknowledged their family ties to their ancestral homeland, which allowed Moroccans to accept them as their own, but they didn’t feel any need to make statements against the lands where they once legally resided. This kind of layered identity, leavened with tolerance, is now increasingly common in workplaces and practice fields in our globalized world. We accept that key players can hail from anywhere and unite across cultural divides. It is one thing to have a recognition of this fact by a high-flying consultant from Boston, it is quite another for it to be accepted as an unspoken background assumption by an auto worker in Tangier or a herder at the edge of the Sahara. Yet, it has happened. This is an important, unrecognized victory for liberalism and tolerance.

Yet, another cultural sign appears in how families are treated and portrayed. Morocco’s players also traveled to the World Cup with their parents, a fact repeatedly endlessly in Moroccan media. On social media, teammates’ parents often appear in the background and sometimes in the foreground. Respecting parents was once a universal value, even if not always honored among young adults, but now the idea has emerged that one can only fully develop oneself only by ejecting or rejecting all people from one’s past. This is wrong-headed. This World Cup victory shows that even star performers can strike a balance between individual achievement and family connection. Recent college grads might take note.

The World Cup also reveals that a rules-based international order, drawing on many countries and cultures, can succeed—even when regional favorites lose. Portugal’s excellent team must have been stunned. Reportedly, Portugal’s legendary player Cristiano Ronaldo wept. Yet, no one challenged the rules or the outcome. The test of any rules-based system is what happens when upstarts win. Here we see that the system worked and that suggests that other global systems based on transparent rules can work, too.

The game has also done its bit for world peace. One out of every twenty Israelis has parents or grandparents who once lived in Morocco. After Morocco’s globally televised victory, they flooded the streets in jubilation, joined by many Israelis with no ties to Morocco. This suggests that many people have more fellow feelings for their neighbors than extremists might imagine. Arabs and Jews celebrating side-by-side, with no one staging it for the world’s cameras. This should give us hope that the Abraham Accords, which allowed four Arab nations (including Morocco) to diplomatically recognize Israel, can succeed.

Albert Camus, the winner of the Nobel Prize for Literature, said that the theater and the soccer field were his two “real universities,” that taught him about human nature. How people play games reveals something about their values and assumptions. In this case, some very good things.