A Truly Special Relationship: The Time Is Now for a U.S.-UK Free Trade Agreement 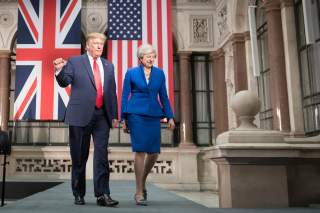 To that I can add only: Faster, please. The goal should be to have a U.S.-UK trade pact ready for approval as quickly as possible.

Once the United Kingdom exits the EU, that restriction ends. We should be ready to take advantage of this huge new opportunity to boost both of our economies.

Here is what a truly “ambitious” free-trade agreement between the United States and the United Kingdom should look like.

Tariffs on trade between the United States and Britain are already generally low. But the best level of tariffs is no tariffs at all. All too often, trade agreements try to manage trade rather than free it. Instead of reducing government control of trade, they lock it in. The British-American trade pact should set a new global standard: the only acceptable level of tariffs is zero.

Second, the purpose of the agreement should be to maximize commerce between the two countries. What better way to do this than to adopt what trade experts call “mutual recognition” of each country’s regulatory regimes? This means that if a regulatory approach is good enough for Britain, it should be good enough for the United States, and vice-versa. For example, we should recognize each other’s drug tests and each other’s car safety standards. This approach would streamline inspections, make better use of scarce budgetary resources, and result in greater efficiencies for regulatory agencies in both countries.

This approach would not be recommended when negotiating trade agreements with most nations. But the UK is not most nations. It is an advanced economy already closely tied to ours. On top of that, it’s legal and political traditions are close to ours; in fact, most of our constitutional and legal history originally stems from Britain. Because both our legal systems are well advanced and compatible, a free-trade agreement would not only boost the mutual trust between our two countries, but the productivity of our economies.

A British-American trade agreement will no doubt spark opposition in British quarters that regard anything American as inevitably bad. For example, British critics have already raised the question of whether a trade agreement with the United States would endanger Britain’s National Health Service. It would not. The only effect the agreement should have on it is to prevent Britain from discriminating against American suppliers on grounds of nationality. In other words, if Britain requests bids to build a new hospital, American firms should be allowed to bid equally. No less, no more.

Politicians should not be dissuaded by the small pockets of political opposition inside Britain. As a matter of fact, polling by YouGov shows that 64 percent of the U.S. public and 67 percent of the British public support a British-American free-trade agreement.

So let the negotiators be “ambitious,” as Trump and May have promised. But we need not wait any longer for what the details of an agreement would look like. Last year, The Heritage Foundation and ten other think tanks on both sides of the Atlantic were ambitious in drafting the full text of The Ideal U.S.-U.K. Free-Trade Agreement. It was published in September, and is there for the taking.

What we accept any more of is delay. In both Britain and the United States, the political calendar will start to work against concluding any agreement in 2020.

Britain is scheduled to exit the EU on October 31. In the coming months, Britain and the United States should intensify and formalize the preliminary discussions that are already under way, with the goal of having an agreement ready to sign on November 1.

We must match ambition in the scope of the agreement with ambition to conclude it as soon as possible.

In the nineteenth century, free trade was liberal Britain’s great cause. Today, it should command the support of liberals and conservatives alike in both countries. A British-American free-trade agreement offers the finest opportunity for reinvigorating the global free-trade agenda. It is an opportunity we must seize.