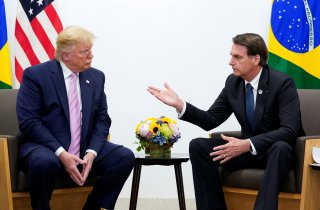 The Trump administration has announced a mini trade deal with Brazil. The deal is the latest win in a string of pacts that reveal new power realities and alliances that will mark the 2020s.

While modest, the agreement nonetheless has measures that could bolster economic links between the two giant economies. Some of its provisions cover anti-corruption steps, regulatory reform, and trade-facilitation provisions such as streamlined customs.

The deal, which National Security Advisor Robert O’Brien said could be a prelude to a larger agreement in a second Trump term, resembles other base hits like Trump’s trade moves with Japan and South Korea rather than larger pacts like the U.S.-Mexico-Canada Agreement and one pending with Britain that has reached thirty chapters and counting.

The idea is to reach an agreement in months, not years, and focus on reforms through which both countries clearly benefit. This stands in stark contrast with past arrangements that took many years to complete and often resulted in the export of U.S. manufacturing jobs.

Just as important as the economic angle is the political-cultural importance of the agreement. Brasilia and Washington have often seen the world from very different perspectives. For decades, Brazil followed a path similar to that of India, with both countries impeding their giant economies with over-regulation while following a “non-aligned” path that kept Washington at arm’s length.

But the presidency of Jair Bolsonaro created the opportunity for fundamental change in Brazil’s domestic and foreign postures. Similar to the political movements that launched Trump in America and Narendra Modi in India, Bolsonaro’s rise reflects a public desire to break radically with a national establishment and set of policy assumptions that failed.

The deal was inked simultaneously in person and digitally between officials of the two countries with U.S. Trade Representative Bob Lighthizer in Washington and his deputy, Mike Nemelka, in Brazil—along with O'Brien. The latter official’s involvement is the latest reminder that trade policy no longer exists in a discrete silo. A major motivation of the pact and the greater engagement of Brazil is to thwart China’s aspirations in South America and provide a capitalist alternative to the corrupt payoffs, debt traps, and shoddy work that accompany Chinese development assistance. O’Brien also pressed counterparts to agree to a ban Brazil is considering placing on the use of Huawei components in its 5G network. The United States has asked countries around the globe to take this step to limit Beijing’s digital mischief capabilities.

The opening is a big change from the false dawn of better U.S.-Brazil relations during the Obama-Biden administration and successive Brazilian presidencies of Lula da Silva and Dilma Rouseff. While the three left-wingers met under generally pleasant atmospherics, they changed little, other than Obama taking Lula’s unfortunate advice to improve relations with the thugs who run Cuba. In contrast, Trump’s opening marks a real change.

Joining O’Brien on the delegation was Kimberly Reed, chairman of the U.S. Export-Import Bank, which helps grease the financial wheels for American exports. She has shepherded the bank’s revival from a near-death experience at the hands of Congress and made thwarting China’s global economic ambitions a top priority. In Brazil, she talked up pending deals to support U.S. exports of nuclear energy technology, airplanes, and farm equipment.

While unheralded, the Trump administration has used the full spectrum of national power—in this case encompassing cooperation on trade, political, and even military issues—to advanced national goals in a combined manner very different than past administrations. While Trump’s political opponents whine that he has been too tough on “traditional” allies like France and Germany, Trump has done a remarkable job of building links with the countries that will matter most to American interests in the 2020s and beyond. Reformist democracies like Brazil and India belong with those standing at the frontier of freedom against China—America, Japan, and Taiwan. The closer they are to the giant North American trade bloc the better, and political-cultural ties with them far outweigh the usefulness of anything that takes place in the salons of Old Europe.

He’d reject the globalist phrasing, but Trump is the architect of a new world order of trade and diplomacy that favors America.