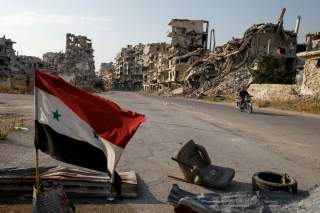 President Donald Trump’s decision to withdraw all U.S. diplomats and military forces from Syria is a strategic mistake. American troops were never going to stay in Syria indefinitely, but a smart, phased approach could have better-protected allies and partners and maintained U.S. credibility. This is not that smart approach. In fact, all the early indications are that this was a hasty decision taken without proper coordination with U.S. allies in the counter-ISIS coalition, with little warning to reliable U.S. partners fighting and dying on the ground, and without heed to the advice of U.S. diplomats, intelligence analysts or the military.

The announcement is unconnected to any reality on the ground in Syria. ISIS is not defeated. In fact, ISIS attacks have been increasing for months, and the group still controls pockets of ground in eastern Syria, where they continue to massacre innocent Syrians. The Pentagon recently reported that it conducted more than 250 airstrikes against ISIS in Iraq and Syria in the first week of December alone.

ISIS was on the path to defeat due to a combination of U.S. airstrikes and the hard-fought ground campaign of the U.S.-backed Syrian Democratic Forces (SDF), an umbrella group with the mainly-Kurdish People’s Protection Units (YPG) at its heart. The U.S. withdrawal leaves the SDF in the lurch. They will be forced to fall back into a defensive posture against ISIS and to guard against a potential Turkish intervention. ISIS will have time and space to reconstitute itself and will almost surely make a comeback over the next few years. Trump will rightly be blamed for blowing up Barack Obama’s successful strategy that was well on its way to defeating ISIS at minimal cost. Eastern Syria will likely descend back into chaos, crippling efforts to bring aid and reconstruction to its long-suffering residents and potentially sending fresh waves of migration—in many cases, people who already fled western Syria—into neighboring countries and Europe. Trump will shoulder a share of the blame for this continued misery.

The timing raises questions. What changed? Did Trump simply tire of heeding his advisors’ sound warnings instead of his own impatient gut? Or was Trump’s decision is driven more by his desire to distract from growing legal troubles at home than any strategic approach to the Syrian conflict and its regional implications. The way Trump has flip-flopped on the U.S. commitment to the war has undermined American credibility and highlighted his inability to maintain focus or understand complex subjects. Trump lambasted Obama for scaling down too quickly in Iraq and doing too little against ISIS—now he looks set to repeat the mistake. Almost the entire professional U.S. national security bureaucracy agreed that maintaining support for the SDF was the least-bad option available to the United States in Syria. These professionals had talked Trump out of previous precipitous withdrawals, but he has thrown off the experts to chart his own course. Hundreds or even thousands of people may die because of his pique and ill-discipline.

For Turkey it will be a case of the dog catching its tail. For all Ankara’s complaints about American support for the YPG and the SDF, the United States has been a moderating influence on these forces and had prevented them from attacking Turkey. In the near term, the United States will no longer have any influence over these groups nor any ability to ensure they eventually seek compromise vis-a-vis Turkey. The United States will also struggle to ensure the return of U.S. arms—and Kurdish forces may be keen to exact revenge on Turkey for its attacks on Syrian Kurds in Afrin and along the border.

The U.S. withdrawal is even worse for Turkey’s long-term security. The Kurds will now be forced to make a deal with the Assad regime. Damascus looks certain to reassert control over the east over the mid-term. This will strengthen Assad and, over time, he will likely seek to use Kurdish militants to exact revenge on Turkey for its support of the Syrian rebellion. Indeed, this would be in keeping with historical precedent. PKK-founder Abdullah Ocalan lived and trained for years in Syria under Hafez al-Assad, and it took Turkey’s threat of invasion to get Damascus to expel the PKK leader. The younger Assad will soon have the motive and ability to exact bloody revenge on Turkish forces in both Syria and Turkey, in part by using the now-enraged and abandoned Kurds. If Turkey decides to launch a new unilateral military incursion into northeastern Syria, they will face determined opposition by Kurdish fighters, likely backed by the regime. Turkey would have to occupy these areas long-term to ensure the kind of security previously provided by the moderating American influence on the YPG, and all at a time when the Turkish military is already very over-stretched.

Perhaps most importantly at the strategic level—the withdrawal is a huge win for Assad, Russia and Iran—all of whose influence will be dramatically increased. They have shown they are willing to back their partners to the hilt and outlast the United States. They can claim they chased the Americans out of Syria, and the region will take note. American credibility will be severely undermined, with potential partners seeing how Trump treats loyal fighters like SDF. The United Kingdom and France—who both have special forces soldiers in Syria alongside the United States and were blindsided by the announcement—will now be left scrambling. With the United States abandoning Syria to Russia and Iran, Turkey will struggle to advance its interests in the broader conflict or the eventual settlement. Turkey will now sit alone across the table from Russia, Iran, Syria—powers that do not share Ankara’s goals in Syria.

Trump’s decision will have profound consequences. It may spark a new phase of the Syrian war as the belligerents jockey to fill the void left by the United States. The United States is left looking like a fickle and self-interested power willing to abandon its partners at the drop of a hat. ISIS is given time to rebuild, surf a new wave of radicalization as the world abandons eastern Syria to Assad, and, eventually, return to its wider campaign of terror. Ankara is left isolated against the far-superior forces of the pro-Assad alliance, while Iran, Russia and the Assad regime can claim victory. And the Syrians who fought and died to expel ISIS and protect their families are left to fend for themselves.

Max Hoffman is an Associate Director on the National Security & International Policy Team at the Center for American Progress, where his work focuses on Turkey and the Kurdish regions.