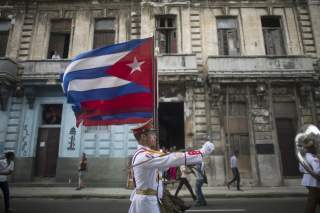 National Security Advisor John Bolton recently announced new policies aimed to hasten the restoration of democracy in Venezuela. One of the initiatives is to fully implement Title 3 of the United States’ trade embargo against Cuba.

Title 3 has been on the books for more than twenty years, yet this will be the first time it will be fully implemented. What that means is that U.S. citizens will now be allowed to sue foreign companies trafficking in stolen property in Cuba. The move is meant to help increase pressure on the Cuban regime and their allies in Venezuela.

President Bill Clinton signed the Cuban Liberty and Democratic Solidarity Act into law in 1996. But his and subsequent administrations have consistently issued waivers bypassing full enforcement of the law. This allowed the Cuban regime and foreign companies doing business with them to profit off property seized from Americans without compensation. The waivers have helped line the pockets of the Castros and their cronies for decades.

Cuba is a one-party state. It is run by a military regime that controls nearly 90 percent of the economy and 80 percent of the island’s workers. This convergence of the commercial and state sector reduces the ability of foreign countries to engage Havana on issues outside of business.

Despite the regime’s historically poor record on human rights and the rule of law, many foreign countries have given an undue preference to commercial engagement. Those profitable business arrangements have enriched the junta and provided little incentive to improve its bad behavior.

Cuba’s role in propagating the crisis in Venezuela should have prompted an international reevaluation of this flawed policy. The Secretary General of the Organization of American States and others estimate that Cuba has “lent” more than forty-six thousand officials to Venezuela’s military, security, and intelligence services.

In exchange for subsidized Venezuelan oil and preferential loans, Cuba has exported its police state to Venezuela. This repressive apparatus has allowed Nicolas Maduro to maintain control as he ruthlessly his pillages his own country.

There is a clear, international consensus regarding the status of Maduro and the future of Venezuela. Fifty-four countries, including Canada and twenty-four members of the European Union, no longer view the Maduro regime as legitimate. Instead, they have established diplomatic relations with interim President Juan Guaido.

These nations have engaged in extensive diplomatic efforts—individually and in multilateral forums—to get Maduro to relinquish control. They have also implemented individual and sectoral sanctions against his regime, including an EU arms embargo. Yet these enlightened policies stand at odds with their commercial and trade practices with Maduro’s enablers in Havana.

Looking at the dynamics in Venezuela and the broader region, these policies announced by Bolton are both necessary and timely. At no other point in history has there been a broader, more forward leaning coalition willing to address the Maduro regime. The Venezuela crisis has created Latin America’s worst humanitarian and economic crisis. Continuing to enrich and enable Maduro’s allies in Havana will foster decisive change in Caracas.

Countries with foreign firms in Cuba must consider the consequences of this “engagement.” They are financially empowering two adversarial nations and directly undermining their own stated foreign-policy objectives.

Addressing this problem is easy, but it requires political will. European countries and Canada must take meaningful steps to stop enriching the Cuban regime and must escalate pressure on Maduro by mirroring the United States’ Venezuela sanctions.

Moreover, it is unjust to let firms located in U.S.-allied nations to benefit from theft. Generations of U.S. citizens have gone uncompensated for property stolen from them by the military regime. Instead, they have watched the Castros, and foreign companies profit off their familial lands and assets. The Justice Department reports 5,913 certified claims of American property seized by the Cuban regime. This does not include hundreds of thousands of Americans who were Cuban citizens at time their property was stolen.

These new Trump administration policies makes sense. They will—at long last—put the United States in compliance with legislation passed by a bipartisan congress twenty-three years ago.

The road to liberty in Venezuela runs through Havana. Our international partners should not put commercial gain before freedom. It’s time they stopped aiding Latin America’s worst dictators.