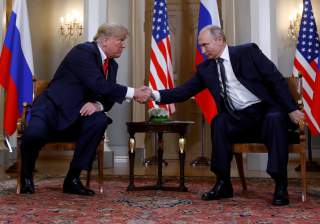 With his deferential tone toward Russian president Vladimir Putin, Donald Trump “did not do himself any favors,” a veteran political observer told me Monday night. “But the fervor of the rebukes against him is telling: for a host of powerful figures in media and the government today, the worst thing Donald Trump has done to date is to try to work with Russia.” For a number of foreign policy restrainers, Monday’s reaction—not the summit itself—“was disturbing.”

“Vladimir Putin is an operator and authoritarian who will exploit openings to his advantage.  While President Trump missed an opportunity to defend American democracy with rhetoric in Helsinki, the U.S. government and the state governments should be focused on hardening America’s electoral infrastructure,” William Ruger, vice president for research and policy at the Charles Koch Institute, told me. “Trump is correct that ‘diplomacy and engagement is preferable to conflict and hostility’ . . . The last fifteen to twenty-five years of U.S. foreign policy has shown that too often we have reached for the military tool and other coercive means, such as sanctions, as a solution to complex problems.”

Ruger and others’ relative defense comes as central members of Trump’s own party, including House Speaker Paul Ryan and Sen. John McCain, with whom the president has always had an uneasy relationship, have joined in on the censure of president.

But also rushing to his side are many of the core, prominent supporters who helped vault Trump to power.

The conservative pundit Patrick J. Buchanan said Monday: “There will be no Cold War II.”

Ann Coulter voiced support and mocked the media coverage. And Tucker Carlson, live from Helsinki, had Stephen F. Cohen, the prominent scholar and dissenter from the American establishment consensus on Russia, as his keynote guest.

In many ways, the reaction to Trump’s Russia gambit is the opposite to the reaction to some of his administration’s other moves.  On immigration, for example, Trump’s White House has in the past floated proposals that risked irking his leading champions—Buchanan, Coulter and Carlson.

Also defending Trump is Sen. Rand Paul, as well as his father, former presidential candidate Ron Paul, who has been generally more deeply critical of the White House than his son.

In recent days, Sen. Paul had tense interviews with Jake Tapper before the summit, and especially with Wolf Blitzer, after the summit.

Representing deep red Kentucky, his support has not gone unnoticed: “Thank you @RandPaul, you really get it!” Trump tweeted Tuesday.

And there are some private fans of the president’s moves in the government.

“I’m loving it man,” a Department of Defense official told me. “I mean, soberly, could it have been done more tactfully? As with everything Trump does, yes.”

A White House official spoke approvingly of the academic John J. Mearsheimer, who with Cohen, appeared on the millennial-oriented vertical Vice to mount a defense of the U.S. working with Russia.

A Department of State official, who voted for Trump, told me he felt much the same.

The restrainer cohort, however, is notably underrepresented at highest levels of the administration.

Trump has chosen to staff his team with establishment figures such as Defense Secretary James Mattis and as well as hawks such as John Bolton. And career Republicans such as Vice President Mike Pence as well as Secretary of State Mike Pompeo were not out front and center Monday defending the president like Sen. Paul. As the president looks for negotiated settlements with both Moscow and Pyongyang, might he start to lean on this outside coterie, which favors a more restrained foreign policy?

In addition, a call held Monday by the Brookings Institution, the liberal think tank broadly critical of the administration, namechecked realists such as Mearsheimer, as well as Barry Posen of MIT and Stephen Walt of Harvard. Walt, however, told me that the Brookings assessment was “wrong,” and that he remains a critic of the president: “This summit is more showmanship than statecraft.  He likes the attention, but neither knows nor cares about the substance of policy, and cannot acknowledge possible Russian interference in the 2016 election without tarnishing his own legitimacy.”

But it’s clear other restrainers are more open to the administration’s moves. “When I watched [the press conference] live, I thought, ‘well that was pretty good,’” retired Lt. Col. Danny Davis of Defense Priorities told me Monday. But Davis added that Trump committed a “big mistake”: the manner in which the president “made so big of an issue of the Mueller situation.”

Some restrainers, such as Reps. Justin Amash and Walter Jones, tweeted critically of the press conference, saying it seemed off.

But Thomas Wright of Brookings argues that the explanation for Trump’s policy positions is likely ideological: “The summit today, and the visit to Brussels and the U.K. that preceded it, revealed that the president is now unbound, acting in accordance with his visceral beliefs about America’s role in the world. These date back over thirty years and include opposition to alliances and free trade, and his support for … Russia.”

Ruger says, while noting that “we should be clear-eyed about our interests and where they conflict with Russia’s,” that “President Trump was also on solid ground when he noted that expectations need to be grounded in realism.  This is smart and sober.”

The president will have to decide who his real friends are. Clearly, a pressure effort is underway among the conservative establishment. Jim Geraghty notes Newt Gingrich’s criticism of Trump his conduct at the Helsinki summit, and writes in National Review: “If all of your trusted friends say you’re wrong . . . maybe you’re wrong.”

And Trump knows he’s taking heat, tweeting: “While I had a great meeting with NATO, raising vast amounts of money, I had an even better meeting with Vladimir Putin of Russia. Sadly, it is not being reported that way—the Fake News is going Crazy!” But by Tuesday afternoon, Trump said he misspoke a day earlier by using a “double negative.” He indicated that he accepted the findings of the intelligence community and stated that what he meant to say was that he didn't see any reason why it "wouldn't" have been Russia that interfered in the 2016 election.

Curt Mills is foreign-affairs reporter at the National Interest, where he covers the State Department, National Security Council and the Trump presidency.