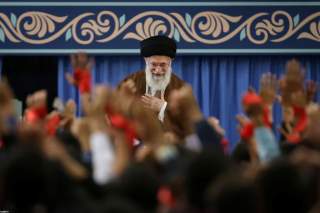 Sanctions have become an addiction for successive U.S. governments.

When in doubt, both the executive and legislative branches have relied on the long U.S. domination of the international financial system to target selected countries, institutions and individuals. It’s politically easy and avoids the obvious risks of military action.

But the Trump administration may regret that it reimposed banking and oil sanctions on Iran on November 5, despite the fact that that country continues in compliance with a 2015 nuclear deal that President Donald Trump unilaterally renounced.

U.S. allies in Europe and competitors such as Russia and China—which overwhelmingly continue to support the Joint Comprehensive Plan of Action (JCPOA)—are furious and will find ways to undercut the U.S. campaign of “maximum pressure” against Iran. While Iran will likely remain within the deal in hopes that Trump will be a one-term president, it could confront the United States elsewhere and eventually resume a slow march to nuclear weapons capability, further destabilizing an already chaotic Middle East.

The Trump administration insists that its goal in walking out of an agreement that made it virtually impossible for Iran to build a nuclear weapon until 2030 is to negotiate a “better deal.” However, the terms it has set would require the Islamic Republic of Iran to reverse forty years of foreign and domestic policies.

In his first major speech as Trump’s second Secretary of State, Mike Pompeo listed twelve demands for new negotiations including an end to both Iran’s nuclear and missile programs and complete withdrawal from regional conflicts. In an essay in Foreign Affairs, Pompeo added a thirteenth—that Iran stop human-rights abuses. The timing was particularly awkward in light of the continued U.S. alliance with Saudi Arabia, which had just brutally murdered a U.S. resident, journalist Jamal Khashoggi, in its consulate in Istanbul.

Indeed, it is hard to discern a feasible goal for the resumed Iran sanctions apart from fulfilling a Trump campaign promise and further impoverishing the Iranian people. The Iranian government is already resorting to familiar techniques to circumvent U.S. sanctions, such as turning off the identification signals on its oil tankers. Tehran most likely has a trove of hard currency to continue to fund proxy groups and will bring more dollars into the country from neighboring Iraq and Afghanistan. Those who will suffer most will be the ordinary Iranians whose “voices” Pompeo’s State Department purports to support—a hollow claim given the administration’s travel ban, which disproportionately affects Iranians and their U.S. relatives. The Trump administration has not even clarified how Iranians can continue to import life-saving drugs from Europe, although humanitarian trade is supposed to be exempt from sanctions.

The most charitable interpretation of U.S. policy is that it is meant to achieve a modest reduction in Iranian regional intervention, which Trump can then declare as a major victory. This is the North Korea model—big buildup, tiny results—absent a reality-show summit that Iran would be loath to accept. If this indeed the goal, it would require serious diplomacy with Iran, perhaps beginning through the good offices of a neutral regional power such as Oman.

In the meantime, much will depend on the vagaries of the oil market and how successful Iran and its trading partners are at busting sanctions.

The Trump administration has predictably blinked on its announced intention to reduce Iranian oil exports to zero by November 5, giving six-month waivers to eight countries. Iran will find other ways to sell its oil by commingling it with crude oil from Russia and other places. The European Union is devising a new mechanism to circumvent the U.S. financial system that will not only facilitate trade with Iran but could undermine future sanctions as a tool of diplomacy. The “maximum pressure” will be less severe than Trump has threatened, but still painful.

It remains unclear how Iranians will react to the new embargo. Already angry that the JCPOA had not boosted the economy as much as their leaders had promised, Iranians are demoralized and depressed. While most would probably change their government if they could—eliminating theocratic control—Iranians are also proud nationalists. Given that it was the Trump administration that violated the JCPOA, not Iran, Iranians will have a harder time blaming their leaders for their predicament. Indeed, annual demonstrations November 4 on the anniversary of the 1979 seizure of the U.S. Embassy in Tehran were bigger and more fervent than usual.

It would be a huge strategic loss for Washington if Iranians—traditionally among the most pro-American Middle Easterners—turn against the United States and look instead to strengthen ties with the autocratic rising powers of Asia. With more than eighty million people, many of them extremely well-educated, and a diversified economy, Iran is a far better long-term bet than most of its regional rivals. Antagonizing and impoverishing its people in an implausible search for a “better deal” will undermine both U.S. national interests and American values.

Barbara Slavin directs the Future of Iran Initiative at the Atlantic Council and is the author of Bitter Friends, Bosom Enemies: Iran, the U.S. and the Twisted Path to Confrontation. She tweets @BarbaraSlavin1.