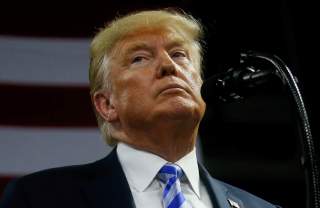 Donald Trump’s new pointman on Syria was once a NeverTrumper. Or so Elliott Abrams, a leading neocon, gloats at the Council on Foreign Relations’ blog.

The ascension of Jim Jeffrey “is important for another reason: he signed one of the anti-Trump letters in 2016 and is I believe the first person to have done so who got an administration post,” Abrams writes. “If this means that the blacklist is fraying, the president and the secretary of state will benefit greatly.”

Abrams himself was once considered for an administration post, deputy Secretary of State, only to be rejected for his NeverTrump affiliations. In February 2017, Abrams pinned the blame on Steve Bannon: “The only person on the White House staff that I know was opposed to my being hired was Steve Bannon so that's my guess. It's a guess.”

Trump’s expressed America First impulses on the campaign trail and in office have rarely been put into actual political practice. But a red line for the president has been overt NeverTrumpism during the campaign.

The letter Jeffrey signed is unsparing.

“Mr. Trump lacks the temperament to be President,” Jeffries and over forty other Republican national security grandees wrote in August of 2016. “Most fundamentally, Mr. Trump lacks the character, values, and experience to be President. He weakens U.S. moral authority as the leader of the free world. He appears to lack basic knowledge about and belief in the U.S. Constitution, U.S. laws, and U.S. institutions, including religious tolerance, freedom of the press, and an independent judiciary.”

“Unlike previous Presidents who had limited experience in foreign affairs, Mr. Trump has shown no interest in educating himself,” the letter continues. “He continues to display an alarming ignorance of basic facts of contemporary international politics.”

Perhaps Jeffrey is now a beneficiary of the president’s incuriosity. Or his appointment may signify the partial lifting of the NeverTrump embargo.

Is this just the start?

The administration's foreign policy has, as the Anonymous op-ed in the New York Times indicated, been largely two-track. Deferential public rhetoric from the president followed by ferocious sanctions imposed by his officials behind the scenes. The New York Times op-ed and a slew of recent reporting confirm what was long obvious: most of those who serve the president do not share his policy impulses, and accordingly, at times work to thwart his agenda. North Korea is perhaps the most instructive example, where the president is fast becoming an island unto to himself.

Then there is Syria. National Security Advisor John Bolton said in July that the United States will stay in the war-ravaged country as long as Iran is “menacing” the region: a spectacularly broad standard, and a state of play unlikely to change short of the total collapse of the Iranian regime.

Trump, however, this week said: “We have done a tremendous job in Syria and in that region eradicating ISIS, which why we are there.” He did not mention Iran. Trump added: “We are very close to finishing the job.”

But Jeffrey said this month that an “enduring” defeat of Islamic State is required. “This means we are not in a hurry to pull out,” the ambassador said, in a remark widely interpreted as a formal walkback by the United States from the idea of an imminent pullout.

Has anyone told the president?