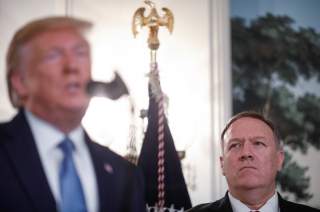 A friend in need is a friend indeed. President Donald Trump has never had many friends in Washington, DC where he promised to “drain the swamp,” and his policies (if enacted) would flip on their head many of the institutions that Washington has spent a lifetime building. As the impeachment inquiry proceeds and the pot slowly begins to boil, Trump’s relationships with his cabinet officials and close associates are coming under more strain.

Since being promoted from director the CIA to Trump’s second secretary of state, Mike Pompeo, has been one of the most trusted advisors in the administration. A man who always looks to follow the president’s position, in September he finally outmaneuvered his internal rival, former national security advisor John Bolton.

Pompeo’s presidential ambitions have long been an open secret in Washington, with his sights set on 2024. The question that’s been on Pompeo’s mind has been the interim five years. Should he remain as secretary of state and hope he can continue in the office in a potential (but uncertain) second term under Trump? Or, alternatively, should he leave the executive branch and run for the open senate seat in his native Kansas?

Two weeks ago, the Kansas City Star editorial board chastised Pompeo’s teasing a senate run, saying if he’s a committed candidate “then he should quit his rather important day job and do that,” rather than “using his government office to fund what looks increasingly like campaign travel.” Despite the paper’s disapproval, if he did run, Pompeo would be the instant frontrunner over candidates like fellow Trump supporter Kris Kobach, the losing 2018 Kansas gubernatorial nominee.

A majority of the people who have testified in front of the House’s impeachment inquiry have been either diplomats or career foreign service officers. Multiple outlets have reported dissatisfaction and a lessening of morale to see Pompeo defend the president’s actions rather than the testimony of his operators. This includes refusing to issue a defense of ambassadors Marie Yovanovitch and William B. Taylor Jr. With the Kansas primary slated for May, and an uncertain future at State (and for the administration), Pompeo will have to roll the dice on a final choice in the coming months.

This week the Washington Post reported that in the aftermath of the White House releasing the Trump-Zelensky transcript, the president wanted Attorney General William Barr to hold a public press conference. There, Barr would state unequivocally that Trump committed no crimes related to the phone call. The attorney general declined. Instead, the Justice Department issued a statement saying it saw no reason to conduct further action relating to allegations of criminal conduct in the conversation with Ukrainian president Volodymyr Zelensky.

The administration denies the story. “The Amazon Washington Post and three lowlife reporters, Matt Zapotosky, Josh Dawsey, and Carol Leonnig, wrote another Fake News story, without any sources (pure fiction), about Bill Barr & myself. We both deny this story, which they knew before they wrote it. A garbage newspaper!” tweeted Trump.

All accounts say Barr’s relationship with the president remains calm, a far cry from his predecessor who, in the president opinion, didn’t go up to bat enough to defend him. For his own part, Jeff Sessions is proving there is political life after Trump. “When I left President Trump’s cabinet, did I write a tell-all book? No. Did I go on CNN and attack the president? Nope. Have I said a cross word about our president? Not one time,” said Sessions in a video announcing his candidacy for his old Alabama Senate seat.

The individual who has been conspicuously quiet has been Vice President Mike Pence, normally the loyal foot soldier. Pence’s office has refused to turn over materials to the House of the Representatives, and it is known that Zelensky spoke with Pence about the suspension of aid in September. There has been no major media appearance where the would-be successor has defended Trump’s actions. Is the vice president keeping his cards close to his chest?

One place Trump is able to find loyalty is his family, who he brought into his administration in various capacities immediately after his election. Donald Trump Jr., his oldest son, and a primary campaign surrogate as he tries for re-election, appeared on The View in an explosive interview where he had choice words for the whistleblower who first filed the intelligence complaint, Hunter Biden, and the regular panelists. Shared widely on social media, the aggressiveness further cements the eldest son as a growing icon among conservative activists.