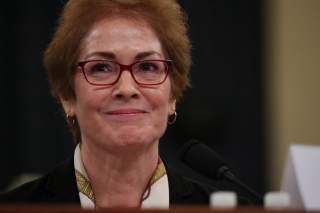 It is becoming increasingly clear that Donald Trump is not always his own best advocate. A case in point came today during the testimony of former Ambassador to Ukraine Marie Yovanovitch when Trump decided to live-tweet criticism of her. “Everywhere Marie Yovanovitch went turned bad. She started off in Somalia, how did that go? Then fast forward to Ukraine, where the new Ukrainian president spoke unfavorably about her in my second phone call with him. It is a U.S. President’s absolute right to appoint ambassadors,” he asserted. In effect, he was blaming the multi-decade civil servant for some of the world’s toughest hotspots, including when she was merely a junior official in her late twenties stationed in Somalia.

Trump’s tweet sent the hearing careening off in a new direction—and it wasn’t to his benefit. Intelligence Committee Chair Adam Schiff (D-CA) pounced, halting the Democratic counsel’s questioning to read Yovanovitch the tweet. “I don’t think I have such powers, not in Mogadishu Somalia and not in other places,” she responded. “I can’t speak to what the president is trying to do, but I think the effect is to be intimidating.”

“I want to let you know Ambassador that some of us here take witness intimidation very seriously,” Schiff assured her. Voter intimidation is a federal crime, and Democrats may include the criticism-in-real-time as another article of impeachment.

It wasn’t just liberals who were dumbfounded by the tweet. Leading Republican lawmakers, including Jim Jordan, turned silent when asked about the tweet. Prominent conservative outlets also expressed perplexity, if not disbelief. “This whole hearing turned on a dime when the president tweeted about her real time,” observed Fox News host Bret Baier.

“The president was not advised by counsel in deciding to do this tweet. Extraordinarily poor judgment . . . Obviously this was quite injurious,” observed Ken Starr, who led the special counsel investigation into the Clinton administration.

“You just made her case of intimidation. Is no one in the room with you?” Michael Steele, former chairman of the Republican National Committee, tweeted at Trump.

After this occurrence, still early in the afternoon, the entire hearing sagged like a leaking balloon. Suddenly, Republicans were hesitant to strike at Yovanovitch’s narrative, fearful of coming across as bullying or even “intimidating.” Already appearing at the start of the morning as a professional diplomat unfairly dismissed for reasons outside of her control, Trump’s tweet effectively ratified her victim status.

Republicans tried to regain their footing. Rep. Mike Conway (R-TX) attempted to do damage control by throwing effusive praise at Yovanovitch’s ambassadorial career. He said her students at Georgetown University (where she now teaches) “benefit from your experience and your inspiration.” Conway had her confirm that her compensation has not been affected by her recall from Kiev and that her State Department colleagues, “the folks you respect the most still respect you and appear to hold you in high regard and high affection.”

Conway’s goal through this odd line of questioning was to give the appearance that the ambassador has not been negatively affected by events this year or that her personal life has suffered. This would contribute to the argument that President Trump can’t intimidate a person who has suffered no undue consequences. But the exchange was so roundabout that it’s unlikely Conway’s attempt at throwing the drowning president a lifejacket will stop him from sinking.

As had been pointed out ad infinitum, it was Trump’s decision to swim this far out to sea. The administration has been plagued with personnel problems since election night, with the chief executive showing carelessness and inattention to who he staffs.

“I worked to advance U.S. policy fully embraced by Democrats and Republicans alike to help Ukraine become a stable and independent democratic state with a market economy integrated into Europe,” said Yovanovitch during her opening statement. She’s correct because Trump never officially verbalized a new stance on Ukraine, a realistic one that reassesses core American interests. Now, surrounded by those who oppose what are supposed to be his primary policy issues, he lashes out when they work against what he never committed to in the first place.

Trump’s reframing of the testimony makes it difficult to address the substance of what Yovanovitch said, which was replete with conventional establishment thinking about Ukraine.

“It is in America’s national security interest to help Ukraine transform into a country where the rule of law governs, and corruption is held in check,” the former ambassador said, calling corruption in Ukraine a “top U.S. priority.” Really? In a world that’s seeing continued protests through Arab capitals, a sustained standoff with Iran in the Persian Gulf, and an increasing tense cold shoulder with North Korea, a top U.S. priority is making sure Ukrainians trust their local city council?

A stronger GOP response might have been questioning the benefits of U.S. policy and asking what relevance an ambassador dismissed prior to the alleged quid pro quo had to the proceedings. Instead, Trump blew it all up. He bought another day of bad optics and burnished Yovanovitch’s credentials—all for the price of less than 280 characters.