Trump and the Discrediting of American Conservatism 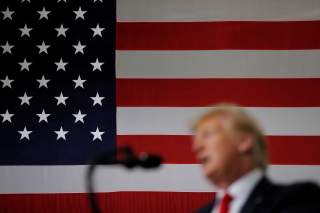 The presidency of Donald Trump has been an abject failure. Aside from a deficit-busting tax cut, Trump has enjoyed no major triumphs in domestic policy. His signature foreign policy initiatives—the trade war with China, denuclearization talks with North Korea, promises of a military withdrawal from the Middle East—have so far failed to bear fruit. Advisers speak badly of the administration’s inner workings and not once has the president enjoyed the approval of most Americans. And, of course, Trump is facing the ignominious prospect of becoming only the third president in U.S. history to be impeached.

People disagree over why Trump has failed as a leader. Is the president temperamentally unfit for office? Is he irredeemably corrupt? Does he listen to the wrong advisers—or no advisers at all? Has his administration been stymied by a villainous “deep state” or undercut by obstructionist legislators? Is America ungovernable?

How analysts account for Trump’s failures has much to do with their political leanings. But there is one explanation that garners a surprising amount of support across the political aisle: the idea that Trump is a poor president because he isn’t conservative enough. Yet while this is a popular diagnosis, it might not redound to the benefit of conservatives and conservatism as it probably should. The problem is that, even if people agree that Trump has failed because he has abandoned (small “c”) conservative values, conservatives themselves cannot easily make these claims because of their weddedness to Trump.

Conservatism, of course, is a contested set of ideas. It is not so much an ideology as a sensibility. But there is a core to the American tradition of conservatism that can probably be identified: respect for custom, tradition, and established institutions; a belief that incremental change is preferable to radicalism and iconoclasm; support for economic liberty; deference to established elites and a distrust of unrestricted democracy; respect for individualism; a strictly originalist interpretation of the U.S. Constitution; strong national defense; and an uncompromising belief in American exceptionalism.

Trump has managed to trample upon all these conservative values in just three short years. The president is an iconoclast who has little respect for any established traditions that do not serve his immediate interests. He has undermined the country’s democratic institutions, including numerous high-profile attacks on the free press. He does not believe in consensual change, viewing politics as a zero-sum game of “winning” over adversaries. He is an outspoken protectionist.

The president heaps opprobrium upon elites (“the swamp”) and urges his followers to distrust elite expertise, too. He is a nationalist. His administration does not respect the rule of law, with the president himself having called parts of the Constitution “phony.” He is frequently at loggerheads with national security experts and hawks within his own party. And he expressly believes that the United States is just another country, not an exceptional nation with a responsibility to provide global leadership.

In other words, Trump is not a conservative. This has always been obvious—and, indeed, is the precise reason that so many conservative intellectuals rejected Trump during the 2016 primary process. What is interesting, however, is that liberal Democrats have joined in with the criticism of Trump for not being conservative enough—at least implicitly.

Democrats, too, have looked to established institutions to constrain the president, and have viewed it as illegitimate (not just unfortunate) that Trump has refused to abide by unwritten rules and conventions. Democrats have exhorted the president to respect tradition, move slowly, and shy away from radicalism. They have decried populism in principle, not just in practice.

Some Democrats have attacked Trump for abandoning free trade and for disparaging America as a less-than-exceptional country. They even criticize Trump for not listening to elites in the military and intelligence establishments, seemingly exalting those few national security grandees who have spoken out against the President for envisaging a slimmer world role for the United States. In short, Democrats have criticized Trump for not being conservative enough, even if they have obviously not framed their attacks in such terms.

On its face, this should be excellent news for conservatives and conservatism. Through his failures, Trump is demonstrating in real-time not only that conservative precepts are useful, but that conservatism might even be a philosophy that can unify America’s governing class. Surely, the lessons being learned by America’s political, economic, and cultural leaders are that presidents err when they abandon incrementalism in favor of radicalism? That the country must put its faith in tradition and established (and establishment) wisdom over the false prophets of populism? Also, if America is to overcome polarization, then One Nation conservatism might be a good place to start?

These ought to be powerful arguments in favor of conservativism. But they will never be heard above the din of recriminations in the post-Trump political environment. It will be impossible for today’s staunch defenders of Trump to claim tomorrow that the president’s failures were the result of his non-conservatism. They might try, but it will be hard to ignore that, instead of criticizing Trump for his serious failures of judgment, policy, and conduct, overwhelming numbers of conservatives (around 90 percent of Republican voters and almost all Republican members of Congress) have been clear and consistent in their support for Trump in office.

After Trump, conservatives will find themselves still bound and gagged as a result of their close association to a president who rejected all their ideas but whom they supported anyway. It will be irrelevant whether conservatives backed the President because they, as pragmatists, have prized power over principles, or because they genuinely admire Trump’s hodgepodge brand of semi-authoritarian big-statism. All that matters is that conservatives have supported Trump, the broad mass of the American people know this, and so conservatives cannot avoid owning his failures.

Needless to say, all of this is welcome news for those on the Left. If conservatives cannot claim to have the antidote to Trump’s excesses without first distancing themselves from the president himself, then liberals and progressives face no such impediment. They pegged Trump as a probable (and impeachable) failure early on. Whenever (and however) Trump is finally ejected from office, the Left will enjoy a fairly good prospect of tossing mainstream conservatives overboard with him. The deck will be clear for a new set of governing ideas, institutions, and personalities.