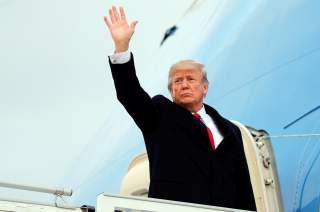 Did Donald Trump perform an economic and foreign policy pivot at the World Economic Forum at Davos? Trump made attacking free trade and globalism a centerpiece of his improbable election victory in 2016 over Hillary Clinton, whose approach to foreign policy seemed to be diametrically opposed to Trump’s. Not only did Trump call for a wall on the southern border with Mexico, but he also alleged that China was seeking to “rape” America economically and that it was “the greatest theft in history.”

At Davos, however, the word China was never mentioned by Trump. Instead, Trump, who was surrounded by a phalanx of his Wall Street advisers, including Treasury Secretary Steve Mnuchin, became something of the star of the show by performing what amounted to a volte-face. It was a shrewd move by Trump to position himself as meeting with the globalists he had previously decried. Klaus Schwab, the founder of Davos, defended Trump in the form of decrying “biased interpretations” of him.

If press reports are anything to go by, Trump won over many of the corporate chieftains he had previously denounced, not least because of his pro-business tax plan, including sweeping corporate tax cuts, that were passed by Congress. And Trump himself appeared to enjoy himself as business leaders cozied up to him. The New Yorker pointed out that Davos constituted a kind of Mar-a-Lago writ large for Trump, a place where the ultra-wealthy convene and vie for his favor.

In his speech, Trump went right down the middle, sounding more conciliatory and elevated notes. He pointed to regulatory reform and tax cuts as imperative steps to pulling America out of the economic abyss his predecessors had left behind. “America First,” he said, “is not American alone.” Indeed, America First, he said, would help benefit the rest of the world economically: “there has never been a better time to do business in America.” But he also sounded some cautionary tones. “We cannot have free and open trade if some countries exploit the system at the expense of others,” Trump said. “We support free trade, but it needs to be fair and it needs to be reciprocal, because in the end, unfair trade undermines us all. The United States will no longer turn a blind eye to unfair economic practices.” Perhaps most startling was the emollient sentiments voiced by Trump towards the rest of the world: “When people are forgotten,” he noted, “the world becomes fractured. Only by hearing and responding to the voices of the forgotten can we create a bright future that is truly shared by all.”

Some in Trump’s base will decry this as a volte-face by Trump. Where, they ask, is the candidate who campaigned as a populist? But to accuse Trump of selling out means that he bought into something originally. This is not a quality that Trump has ever displayed; rather, his appearance at Davos made it clearer than ever that he is a protean figure. For now, Trump is enjoying his ability to tout America as something of an economic paradise, where the stock market is roaring and unemployment negligible. But growth in the fourth quarter of 2017 reached 2.6 percent. The blunt fact remains that Trump’s tax plan was a bonanza for the wealthy and may well punish the middle-class with higher taxes. If Trump’s economic moves fail to create significant growth in 2018, Republican political fortunes in the midterm elections will suffer a brutal buffeting. Sen. Bernie Sanders (D-VT) assailed Trump’s speech on Twitter with a blast of populism: “While Donald Trump and the ‘masters of the universe’ assemble in #Davos, the 6 richest people own as much wealth as the bottom half of the world's population – 3.7 billion people. We need a global economy that works for all, not just multi-national corporations and the very rich.”

It was in his impromptu remarks following the speech that the tone suddenly shifted. Trump elicited boos when he observed, “It wasn’t until I became a politician that I realized how nasty, how mean, how vicious and how fake the press can be ― as the cameras start going off in the back.” He’s hardly the first president to take this view.

Specifically, Trump decried the revelation that he had sought to fire Special Counsel Robert S. Mueller III in June—partly on the basis that Mueller’s resignation from a Trump National Country Club and request in the form of a letter to receive the return of a portion of his dues constituted a heinous instance of conflict of interest—as another instance of “fake news.” There can be no doubting that this story put something of a damper on the festivities at Davos. The political atmosphere in Washington could hardly be more febrile. Even as House Republicans have gone into overdrive to concoct a deep-state conspiracy that seeks to undermine Trump, his own actions appear to have provided further fodder for his detractors to allege obstruction of justice. Meanwhile, rumors continue to swirl around about the likelihood of Trump sacking his chief of staff, John Kelly. Vanity Fair alleges that Trump referred to Kelly, among other things, as a “nut job.”

Trump probably enjoyed Davos even more than he anticipated. Like not a few previous presidents, Trump may soon discover that traveling abroad is an enjoyable respite from the prospect of confronting political turbulence at home.